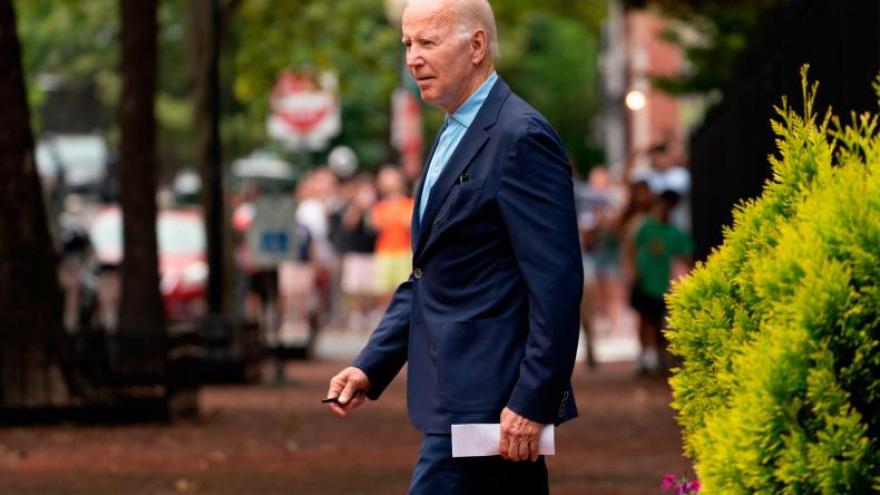 President Joe Biden departs Holy Trinity Catholic Church in the Georgetown section of Washington after attending a Mass in Washington on July 17, 2022.

In the executive order, Biden declared a national emergency to deal with the hostage taking and wrongful detention of Americans abroad, saying such "heinous acts" constitute "an unusual and extraordinary threat to the national security, foreign policy, and economy of the United States."

"The United States Government must redouble its efforts at home and with partners abroad to deter these practices and to secure the release of those held as hostages or wrongfully detained," he said.

The executive order, which families were informed about on a call with administration officials Monday, was strongly welcomed by some families as a key tool to bring their loved ones home. However, others voiced immense frustration about its rollout, telling CNN that even as the White House touts the new order, it has still not addressed their larger concerns and requests, namely a meeting with Biden.

"I can't speak to the President's particular schedule, but I can speak to his commitment to these issues, to the priority he places on bringing home Americans held hostage abroad, wrongfully detained abroad," a senior administration official said when asked by CNN on a call with reporters whether Biden would meet with the families who will be in the nation's capital this week.

In addition to the executive order, the administration announced it will use a new indicator on State Department travel advisories for individual countries to highlight that a US citizen is at risk of being taken hostage or wrongfully detained if they travel there. Myanmar (also known as Burma) China, Iran, North Korea, Russia, and Venezuela will all receive that new "D" risk indicator, a second senior administration official said.

'Our goal is to bring folks home'

Secretary of State Antony Blinken described Tuesday's actions as a demonstration of the US government's commitment to the safety of US citizens abroad, saying in a statement, "we will continue to be relentless in our efforts to reunite Americans who are held hostage or wrongfully detained with their loved ones."

The first senior administration official said there would not be new sanctions rolled out immediately under the executive order's sanctions authority.

"Our goal is to bring folks home, so we use the sanctions authority with a primary focus on helping to secure a loved ones' release," a third senior administration said. "Now using sanctions may not always help secure someone's release so we will therefore be judicious and strategic in our use of this authority."

Tuesday's executive order builds on processes for dealing with hostage cases established during the Obama administration. It also draws heavily from an existing law -- the Robert Levinson Hostage Recovery and Hostage-Taking Accountability Act -- which laid out the criteria for who is considered wrongfully detained, expanded the tools to help free those US detainees and hostages, authorized sanctions and was meant to foster increased engagement with families. That law was named in honor of Robert Levinson, an American detained in Iran for decades and who is believed to have died there.

The third senior administration official said there had been continuous meetings to craft the executive order since the law was passed in December 2020 "and the idea was that we had to get this right, this is not something we want to rewind in any way, shape, or form."

"We wanted to have a tool that was useful and that took a long time to try to make sure that all the stakeholders got a chance to weigh in so we could find something that was going to be useful, powerful, and going to achieve the end states that we were hoping to achieve. So it took a while, but if you want to get it right, sometimes you have to invest the time, and I think that's what is the case here," that official said.

Elizabeth Whelan, whose brother Paul Whelan has been detained in Russia since 2018, called the executive order "a significant move, and extremely welcome," and one she has been waiting for since the Robert Levinson Act passed.

"This EO gives the US leverage we wouldn't otherwise have against wrongful detention across the board, and sets the example for other countries to do likewise," she said.

"Ultimately, it will take a multilateral response to really squelch the evil practice of using ordinary citizens as political pawns, and I hope our government makes full use of this EO to help get Americans home in the meantime," Whelan told CNN, noting that she appreciated getting a preview of the news during the call with families Monday.

Other family members of Americans wrongfully detained abroad told CNN they saw the executive order as a positive step forward, but said it was unclear the impact it would have on their loved ones' cases. Veronica Vadell Weggeman, whose father Tomeu Vadell has been jailed in Venezuela since 2017, also said she appreciated getting a heads up that the executive order was being issued, rather than being surprised by it.

'In no way a response to what we need'

However, other family members who spoke to CNN said they were very dissatisfied with Monday's call and that they felt misled about the contents of the call. They were informed about it on Sunday in an email that gave no details about the contents, leading them to believe that there would be substantive updates or that Biden might join.

They were not able, they said, to voice questions or concerns during the call, which one family member described as "isolating." Others said that if they had known ahead of time that the call would discuss the executive order, they would not have dialed in, because that call was "in no way a response to what we need and what we've asked for repeatedly."

It was "poor delivery for the incorrect message," said one of the family members, speaking on the condition of anonymity to discuss the off-the-record call.

The officials, according to family members briefed Monday, did not explain why the White House was rolling out the order Tuesday. Some family members told CNN that they felt the administration's timing of the order is meant to distract from the negative attention and upcoming events held by the detainees' families in Washington, DC, including the unveiling of a new mural commissioned by the "Bring Our Families Home Campaign."

In a statement, Jonathan Franks, the spokesperson for the campaign described the call as "an effort to pre-manage the press attention from many hostage families being in D.C. this week to unveil their mural."