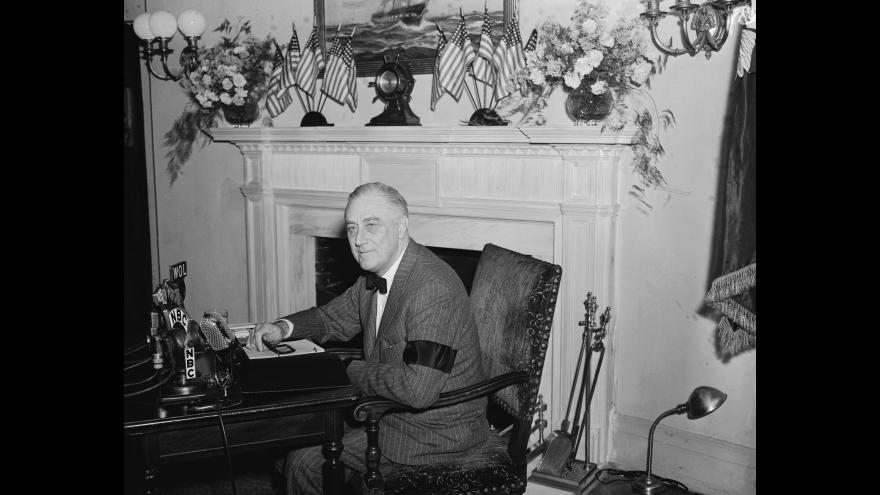 The White House will reinstate regular presidential addresses to the nation in the style of FDR's fireside chats. This image shows President Franklin D. Roosevelt addressing the nation two days after the Pearl Harbor attack, December 9, 1941, at the White House in Washington, D.C.

(CNN) -- The White House is bringing back weekly addresses from the President directly to the American people, continuing in the tradition of President Franklin D. Roosevelt's fireside chats.

"This is a time-honored tradition in the country of hearing from the President in this way, from FDR's Fireside Chats to Ronald Reagan establishing the weekly presidential radio address," White House press secretary Jen Psaki told reporters Friday. "President (Joe) Biden will continue that tradition, and we expect it to take on a variety of forms."

Biden's inaugural edition features a "conversation" between him and Michele, a Roseville, California, resident who lost her job at a startup clothing company due to the Covid-19 pandemic, according to Psaki.

The reinstatement of the presidential addresses is another return by the Biden administration to presidential traditions and norms, including the resumption of daily White House press briefings.

In the video of his first "weekly conversation" posted Saturday, Biden, while seated in the Oval Office, offered Michele solace during their phone call and used the interaction to highlight his Covid relief plan -- the "American Rescue Plan."

Michele recounted how she was laid off for the first time in her life this July, wrote a letter to Biden to tell him how she felt and received the phone call from him shortly after.

"I've been saying a long time the idea that we think we can keep businesses open and moving and thriving without this pandemic is just a nonstarter," the President said on the call. "We're putting together a plan that provides for emergency relief to people who are in desperate need now."

Biden also reiterated his commitment to administering 100 million shots in his first 100 days to which Michele excitedly shares that she "finally" got her parents appointments.

Former President Donald Trump, Biden's Republican predecessor, regularly recorded weekly addresses posted to Facebook during the first few months of his administration, according to the Voice of America. The addresses became more sporadic after 2017 with the White House eventually ending the tradition in 2019, the Washington Post noted. Trump preferred using Twitter to directly engage with the American people, including to announce major policy decisions or his stance on particular issues.

Roosevelt started the tradition during his first term, using his evening radio broadcasts to inform the American public about his policies and actions and to calm the nation during times of crisis.

The Democratic president gave the first of his fireside chats on March 12, 1933, on the banking crisis, according to University of Virginia's Miller Center.

This story and headline have been updated to include the release of Biden's first "weekly conversation."

CORRECTION: An earlier version of this story misspelled the name of the California resident with whom Biden will be speaking. Her name is Michele.