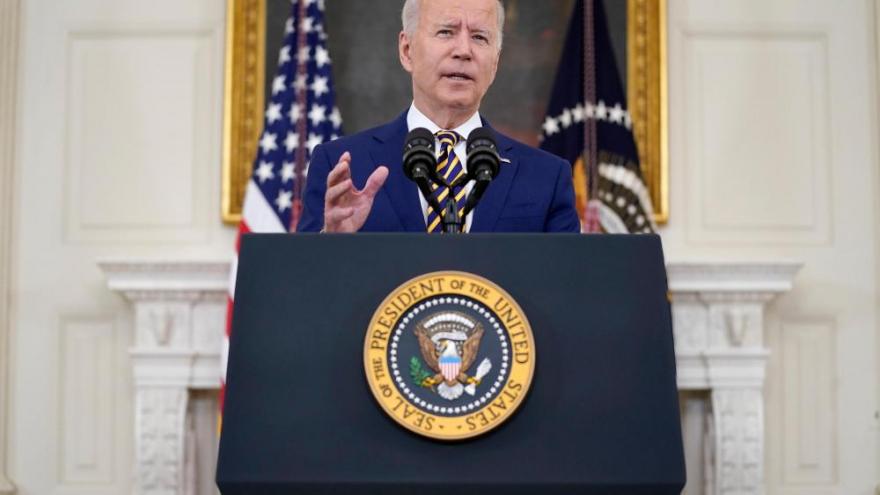 (CNN) -- The White House on Tuesday acknowledged the US would fall short of President Joe Biden's July Fourth Covid-19 vaccination goals, saying the country has more work to do to get younger Americans vaccinated.

White House Covid-19 response coordinator Jeff Zients said the country would miss both of the President's goals of having 70% of adult Americans with at least one Covid-19 vaccine shot and 160 million Americans fully vaccinated by July Fourth.

Zients told reporters during a White House Covid-19 response briefing that the US would have 70% of US people 27 and older with at least one Covid-19 shot by the July Fourth weekend but that it would take "a few extra weeks" to reach 70% of all US adults.

He noted more than 150 million American adults are fully vaccinated, and that the US was on track to get 160 million adults "no later than mid-July."

Zients said Biden's goal was "aspirational," and touted the progress the administration has made in the last several months.

Biden "set 70% as our aspirational target. And we have met or exceeded it for most of the adult population. This is a remarkable achievement," Zients said.

He said the administration is now focused on getting younger Americans, particularly 18- to 26-year-olds, vaccinated against the virus. He said the White House would be working with state and local leaders on outreach efforts.

"The reality is many younger Americans felt like Covid-19 is not something that impacts them and they've been less eager to get the shot. However, with the Delta variant now spreading across the country and infecting younger people worldwide, it's more important than ever that they get vaccinated," Zients said.

White House press secretary Jen Psaki told reporters on Tuesday the administration does not feel like it missed the President's vaccination goal because "something went wrong."

"How we see it is we set a bold, ambitious goal -- something the President has done from the very beginning -- and we are expected to meet that goal just a couple of weeks after July Fourth. And in fact, at this point, as of today, we're going to be already at that point for people who are 30 years of age and older," Psaki said during a briefing.

Biden has not yet publicly acknowledged that he is unlikely to meet his July 4 goal. Despite that, White House officials are moving ahead with their plans for a big celebration on the South Lawn, where about 1,000 guests are expected to attend. The view inside the administration is that there is still reason to celebrate given most of the country has started to return to normal.

Officials have downplayed the expectation that the President is set to miss his first vaccination target since taking office.

"We've made tremendous progress in our vaccination efforts to date, and the ultimate goal has been to get America back to normal, as you said, and we're looking forward to doing that even here at the White House," press secretary Jen Psaki said this week.

Vaccine coverage among young adults has been lower and increasing more slowly over time than other age groups in the United States, and the intent to be vaccinated is lower among younger adults, according to studies published Monday by the US Centers for Disease Control and Prevention.

If the weekly pace of vaccinations continues at the rate from the week of May 22, only 57.5% of adults under the age of 30 will have received at least one dose of Covid-19 vaccine by the end of August.

Last week, the President marked the milestone of the US administering 300 million Covid-19 shots in 150 days and continued to urge unvaccinated Americans to get the shot to protect themselves against variants of the virus.

Federal health officials have warned that unvaccinated people can continue to spread the virus and more transmissible new variants could accelerate the spread. The Biden administration is racing to get more of the eligible population vaccinated to try to prevent the spread of new variants.

Despite all of the progress the nation has made in the last several months to reduce the number of Covid-19 deaths, cases and hospitalizations, the US recently surpassed a grim milestone of 600,000 Covid-19 deaths, according to data from Johns Hopkins University.

But the White House is moving forward with touting the progress made in fighting the pandemic. The July 4 celebration on the South Lawn will be the largest in-person White House event since the President took office. The National Mall will also be open for the traditional July Fourth fireworks.

In addition to focusing on getting Americans vaccinated, the Biden administration also recently announced it would invest more than $3 billion from the American Rescue Plan to accelerate the discovery, development and manufacturing of Covid-19 antiviral medicines. These antivirals could include pills someone could easily take at home early in an illness.

The White House has stressed its primary focus is on vaccinating Americans, but it has made several announcements recently about its plan to donate Covid-19 vaccines abroad.

As part of Biden's efforts to reassert US leadership on the world stage, the President announced earlier this month that the US planned to purchase and donate 500 million Pfizer Covid-19 vaccine doses globally. The move will also serve to counter efforts by Russia and China to use their own state-funded vaccines to expand their global influence.

The Biden administration on Monday also announced its plan to distribute 55 million of the 80 million Covid-19 vaccine doses Biden has pledged to allocate by the end of this month.

For all 80 million doses, the White House has said 75% will be shared through the global vaccination program called Covid-19 Vaccines Global Access, or COVAX, and 25% will be shared directly with countries in need.

CORRECTION: An earlier version of this story incorrectly stated who from the Biden administration will give remarks on Covid-19 on Tuesday.

This story has been updated with additional information and reporting.