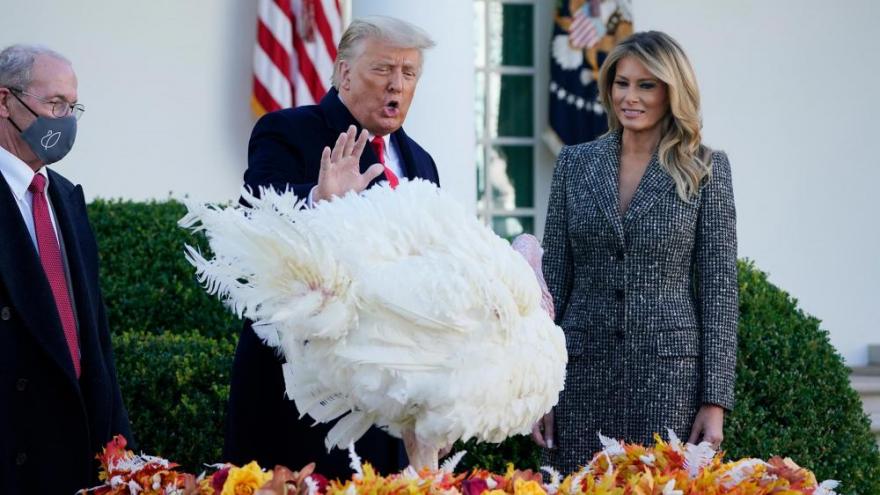 President Donald Trump's annual Thanksgiving proclamation calls for Americans to "gather" for the holiday. In this image,Trump pardons Corn, the national Thanksgiving turkey, in the Rose Garden of the White House, Tuesday, Nov. 24, in Washington.

(CNN) -- President Donald Trump's annual Thanksgiving proclamation calls for Americans to "gather" for the holiday, even though federal public health officials have explicitly warned against it.

The final line of the proclamation, issued by the White House press secretary's office Wednesday evening, reads: "I encourage all Americans to gather, in homes and places of worship, to offer a prayer of thanks to God for our many blessings."

Public health experts are warning that Thanksgiving could be "the mother of all superspreader events." And the US Centers for Disease Control and Prevention recommends against traveling for Thanksgiving as a means to preventing further spread of the coronavirus.

Coronavirus cases are surging, and public health officials warn that family gatherings like Thanksgiving, which are often indoors and multi-generational, could put vulnerable people at risk.

Though presidential proclamations on holidays are typically perfunctory statements put out by the White House, from time to time, they take on the political tones of the administration or current events. This year's proclamation also included sections dedicated to addressing the coronavirus pandemic.

Trump has frequently flouted public health warnings and hosted large groups at the White House for events that have later been deemed superspreaders, including a ceremony for new Supreme Court Justice Amy Coney Barrett, after which the President tested positive for coronavirus.

And despite warnings from public health officials -- including the US Surgeon General -- not to hold large gatherings, many of this year's public and private White House holiday events are scheduled to still take place in a smaller fashion.

First lady Melania Trump on Monday oversaw the arrival of the White House Christmas tree maskless, at one point posing for pictures with the tree farmers, who removed their own masks. And on Tuesday, an unmasked Trump pardoned a turkey in the White House Rose Garden in front of a masked crowd.

The first lady's chief of staff Stephanie Grisham said Monday that many of the traditional White House holiday parties will go on, but there will be safety precautions, including smaller guest lists and mask requirements, at the indoor events.

Invitations for White House holiday parties have started to arrive on Capitol Hill and have been received by Republican donors, two people who have received them said. The sources said the invitations seemed like any other year, with no mention of coronavirus precautions. And last week, the first lady finalized guest lists for parties with friends, family and staff, which will be held over multiple evenings in mid-December.