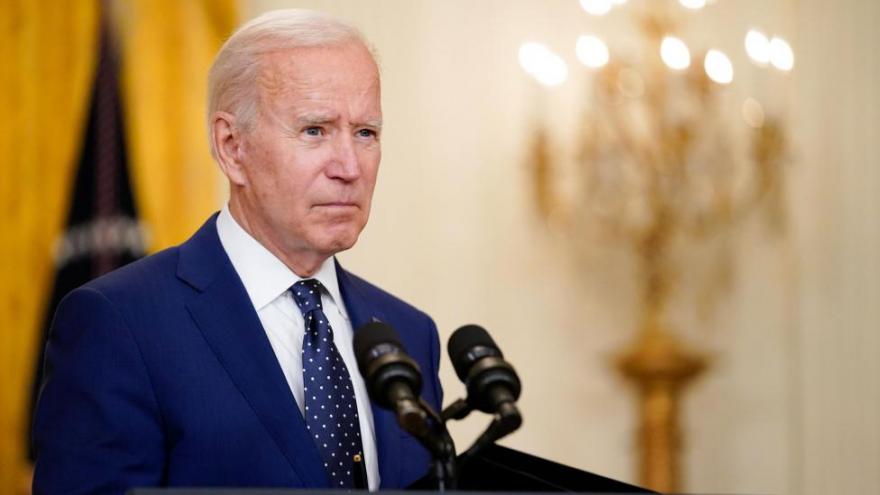 The White House has told refugee advocates late Friday that President Joe Biden will likely raise the current refugee cap of 15,000 quickly. Biden is seen here at the While House on April 15.

(CNN) -- President Joe Biden said Saturday his administration will increase the refugee cap after a back and forth on Friday where the administration first announced it would keep the cap at the historically low level set by former President Donald Trump, before reversing course after facing blowback from refugee advocacy groups and Democrats in Congress.

"We're gonna increase the numbers," Biden told reporters at the Wilmington Country Club after a round of golf, noting that the situation on the southern border had complicated things. "We couldn't do two things at once. And now we're going to increase the numbers," he said. Notably, the President called the situation on the southern border a crisis, a word administration officials have avoided using.

White House officials signaled in a conference call with refugee resettlement advocates late Friday that Biden is likely to raise the current refugee cap of 15,000 quickly, well ahead of the May 15 deadline set Friday, according to a person familiar with the matter.

Deputy national security adviser Jon Finer told the advocates that Biden wants to work quickly to bring the refugees who have already been vetted and cleared to the United States after a prolonged delay, in which many of their flights were canceled.

The call comes after the White House faced immediate blowback from refugee groups and Democratic and progressive lawmakers for initially saying Friday that Biden would keep this fiscal year's refugee cap of 15,000, and not raise the cap as he had promised to do -- a significant reversal from the Biden administration's proposal in February to lift the cap to 62,500.

After the flood of criticism, the White House backtracked later Friday and announced Biden would set a "final, increased" refugee cap by mid-May, but added that it's "unlikely" the number would be as high as the 62,500 cap proposed earlier this year.

Biden, a Democrat, took office aiming to set a new course for US immigration policy, including a more compassionate approach, following Trump's hardline policies and vilification of refugees. But his initial decision to not change the Trump administration's refugee cap of 15,000 for this fiscal year, the lowest since 1980, put him at odds with his promises as a candidate and on track to admit fewer refugees than any other US president in history, according to the humanitarian group International Rescue Committee.

Biden announced in February that his administration would bring the cap up to 125,000 refugees during his first full fiscal year in office and signed an executive order intended to rebuild and enhance the programs in place to pave the way for more arrivals to the US.

Finer said on the call that the 125,000 figure that Biden had floated is an "aspirational number" but remains the administration's goal and is going to be "a major challenge," according to a source familiar with the call.

Pressed on the call why the Biden administration is on track to have the worst year of refugee admissions in the program's history, Finer insisted that "this will not be the number that we end on," according to the source familiar.

Finer also claimed that the refugee admissions program was "even more decimated than we thought," with less staffing to deal with processing capacity and a security vetting process that's slow moving, according to the source familiar.

The White House had said Friday that a "factor" in the decision was that the Office of Refugee Resettlement, a federal agency under the Health and Human Services Department, had limited capacity, given the growing number of migrants arriving at the US-Mexico border.

Finer said that the administration wanted to be sure that it could meet its responsibilities to support both refugees trying to resettle in the US and unaccompanied children arriving at the southern border.

But refugee resettlement agencies have repeatedly said they're prepared to take in refugee arrivals.

The State Department presented Congress with a proposal to expand the Trump-era refugee cap to allow up to 62,500 refugees to be resettled in the US, which was in line with Biden's campaign commitment to raise the refugee ceiling.

But Biden delayed approving the proposal increase, resulting in the cancellation of hundreds of resettlement flights and leaving thousands of people who had expected to arrive in the US in limbo.

Sources had told CNN that Biden resisted signing off on increasing the Trump-era refugee cap due to political optics, when the administration is facing heat over its handling of an influx of migrants at the US-Mexico border despite it being a separate situation from the refugee program.

On Friday, Biden signed the emergency presidential determination that returned to regional allocations, effectively casting a wider net of who can resettle in the US under the current 15,000 refugee ceiling.

As of March 31, only 2,050 refugees had been admitted to the US this fiscal year, according to the Refugee Processing Center.

This story has been updated with comments from Biden.