White House takes aim at Fauci but Trump has no current plans to fire him, source says 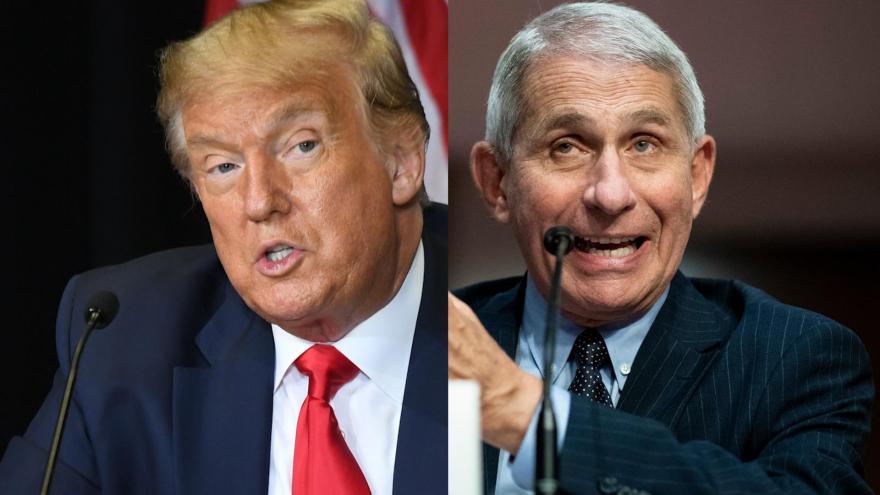 (CNN) -- The White House is making a concerted effort to discredit Dr. Anthony Fauci as he becomes increasingly vocal about his concerns over reopening the country amid a national surge in coronavirus cases. The moves to undercut Fauci come just days after he gave an unvarnished look at his relationship with President Donald Trump, including that they have not spoken in weeks.

The tension between the two men -- who are no longer speaking, CNN reported last week -- has grown publicly as they have responded to one another through interviews and statements.

Trump does not plan to dismiss Fauci, and probably couldn't directly fire him if he wanted to, White House officials have determined. He insisted on Monday that his relationship with the doctor remains strong.

"I have a very good relationship with Dr. Fauci, I've had for a long time," Trump said at the White House during a roundtable event honoring police officers. "I find him to be a very nice person. I don't always agree with him."

But recent moves by the White House to publicly diminish the nation's top infectious disease expert amounts to a significant escalation as it seeks to divert attention from the government's failure to contain the coronavirus and instead push Trump's call to reopen the country. That effort continued Monday morning, when the President retweeted a baseless claim by game show host Chuck Woolery that "everyone is lying" about the coronavirus -- including the Centers for Disease Control and Prevention.

In a statement Saturday, a White House official told CNN that "several White House officials are concerned about the number of times Dr. Fauci has been wrong on things." The official went on to provide a lengthy list of examples, citing Fauci's comments early in the pandemic and linking to past interviews.

These bullet points, which resembled opposition research on a political opponent, included Fauci downplaying the virus early on and a quote from March when Fauci said, "People should not be walking around with masks," among other comments. Not included were previous statements from the surgeon general urging people not to buy masks or an acknowledgment of the President's own false claims and misstatements about the virus.

On Monday, the White House insisted it was not trying to discredit Fauci. Speaking during a midday briefing, press secretary Kayleigh McEnany said officials simply "provided a direct answer to what was a direct question" when they issued the list of Fauci's statements.

"There's no opposition research being dumped to reporters," she said, insisting later that Trump and Fauci have "always had a very good working relationship."

"Overall the notion of the tweet was to point out the fact that when we use science, we have to use it in a way that is not political," she said.

Fauci did not return a request for comment by CNN. But he has at times openly disagreed with Trump in a series of recent newspaper and radio interviews.

In particular, a recent interview with the Financial Times in which Fauci disclosed that he has not briefed the President in weeks prompted the White House to distribute the list of Fauci statements, an aide familiar with the matter said. Among other things, Fauci disputed Trump's claim that "99%" of coronavirus cases in the United States were "totally harmless" -- saying that was "obviously not the case" -- and drew a connection between his insistence on "speaking the truth at all times" to his noticeably diminished television appearances.

Despite the ongoing White House attempts to discredit Fauci, Trump has not expressed interest in firing the infectious disease specialist, according to a senior administration official.

Even if he wanted to, White House officials said they believed it would be difficult to dismiss Fauci from his position as director of the National Institute of Allergy and Infectious Diseases, a position he has held since 1984. As a member of the Senior Executive Service, Fauci could only be fired for cause and only by a direct supervisor, such as Health and Human Services Secretary Alex Azar or National Institutes of Health director Dr. Francis Collins.

While Trump could instruct Azar to fire Fauci and could concoct a cause, that would likely be subject to a lengthy process that Fauci could appeal. Officials said they believed it highly unlikely the President would take that step and say he has not voiced a desire to do so at this point.

Aside from the regulatory hurdles, Trump has also recognized it would be politically damaging if he sought Fauci's removal because Fauci is considered credible by a large swath of Americans and by members of Congress. Though he seems comfortable with publicly discrediting him, Trump has also acknowledged in private that Fauci is well regarded.

Instead, officials said it was more likely Fauci is left to twist in the wind, as other administration officials have done previously as they come under fire from Trump and the White House. Trump could also potentially remove Fauci from the White House coronavirus task force -- a body comprised at his own order, without any statutory mandate -- though Trump has not engaged personally with the task force in months.

Fauci's 'good press' a source of irritation for Trump

Fauci, who has worked under six US presidents from both parties and was awarded the Presidential Medal of Freedom in 2008, has emerged as the most visible public health advocate during the pandemic and surveys consistently find that he is more trusted than Trump. He's also emerged as something of a pop culture icon over the past few months, from being impersonated by Brad Pitt on "Saturday Night Live" to appearing on Instagram live chats about coronavirus with celebrities such as NBA star Steph Curry.

A person familiar with the situation acknowledged that Fauci has been appearing on television less frequently because Trump is annoyed by his public statements. Though Trump was already miffed by Fauci's television appearances early on, the White House has sought to downplay tension between the two for several months. The press shop stopped approving Fauci's television appearances, believing it would help alleviate the situation, though they continued to allow him to give interviews with print outlets.

Another person familiar has said the rare in-person meetings between Trump and Fauci are not awkward and don't involve raised voices, but Trump has complained about Fauci privately. Sources say part of that irritation is over the "good press" Fauci has received.

Trump's irritation with Fauci has also, at times, been encouraged by Peter Navarro, Trump's trade adviser who has repeatedly blamed Fauci for doubting the efficacy of hydroxychloroquine. Navarro once told Fauci he would be personally responsible if it was later shown that hydroxychloroquine worked to treat coronavirus, despite multiple studies questioning its use.

One senior administration official told CNN that some officials within the White House do not trust Fauci. According to the source, those officials think Fauci doesn't have the best interest of the President, pointing to some of Fauci's interviews. Other administration officials have told CNN that while they have disagreements with Fauci's methods, they don't doubt his motives, and that his only concern was public health.

In an interview on NBC's "Meet the Press" Sunday, Adm. Brett Giroir, a member of the White House coronavirus task force, said there is "open discourse" within the team.

"I respect Dr. Fauci a lot, but Dr. Fauci is not 100% right and he also doesn't necessarily -- and he admits that -- have the whole national interest in mind. He looks at it from a very narrow public health point of view," Giroir said.

"We have great faith in the capacity of all of our scientists and doctors on the coronavirus taskforce to impart necessary public health information. People like Admiral (Brett) Giroir, Surgeon General (Jerome) Adams and others are carrying these messages very effectively," Caputo said in the statement, although he did not directly answer questions about Fauci.

Fauci is scheduled to be in the West Wing Monday for meetings.

Trump -- who in April retweeted a message calling for Fauci to be fired, though he later downplayed the significance of the message when asked -- has recently intensified his public criticism of Fauci in recent weeks.

"Dr. Fauci is a nice man, but he's made a lot of mistakes," Trump said last week, undermining the public health expert whom Americans say in polls they trust more than the President.

In recent interviews, he openly questioned the advice he'd received from Fauci at the start of the outbreak.

"I think we are in a good place. I disagree with him," Trump said in an interview Tuesday when questioned about Fauci's assertion the US is still "knee-deep in the first wave" of the pandemic.

Schiff told CNN's Wolf Blitzer on "The Situation Room" that such a move "is so characteristic of Donald Trump. He can't stand the fact that the American people trust Dr. Fauci and they don't trust Donald Trump -- and so he has to tear him down."

"We need people more than ever to speak truth to power, to be able to level with the American people about what we're facing with this pandemic, how to get it under control, how to protect ourselves and our families," Schiff continued. "That's what Dr. Fauci has been trying to do and by sidelining him the President is once again interfering with an effective response to this pandemic."

Kathleen Sebelius, who served as secretary of Health and Human Services under former President Barack Obama, told CNN efforts to discredit Fauci and other scientists are "potentially very, very dangerous" as the US and other countries work toward a coronavirus vaccine.

"I think people want to know from the scientists that the vaccine is safe, that it is effective, that it will not do more harm than good," she told Blitzer on "The Situation Room."

"And if the public scientists have been discredited, if the President says 'don't believe them, you can't listen to them, they're often wrong,' we have then undermined a national vaccination campaign which is an essential step to bringing this horrible period to an end."