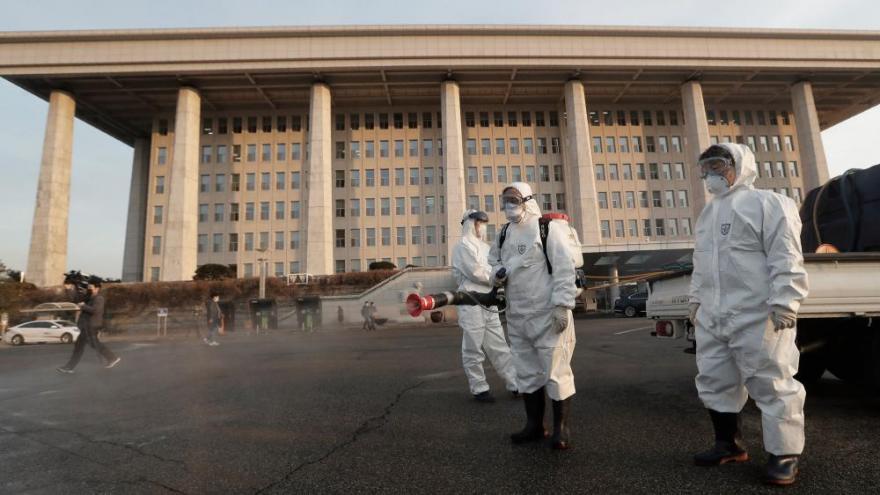 Workers wearing protective suits spray disinfectant as a precaution against the coronavirus at the National Assembly in Seoul, South Korea, Monday, Feb. 24, 2020. The White House has requested $1.25 billion in emergency funding to address the novel coronavirus, part of an effort to direct as much as $2.5 billion in total funds to bolster its response to the growing global crisis, according to a letter obtained by CNN.

(CNN) -- The White House has requested $1.25 billion in emergency funding to address the novel coronavirus, part of an effort to direct as much as $2.5 billion in total funds to bolster its response to the growing global crisis, according to a letter obtained by CNN.

"To this point, no agency has been inhibited in response efforts due to resources or authorities," Russell Vought, the acting director at the Office of Management and Budget, wrote in the letter to lawmakers requesting the funds. "However, much is still unknown about the virus and the disease it causes."

In total, Vought wrote, the administration expects "to allocate at least $2.5 billion in total resources" for the response effort. Much of that support would come from shifting funds already appropriated to other government agencies toward the effort.

Lawmakers said they were preparing for the administration's request to reach Capitol Hill, even as the final numbers were still in flux in advance of the letter sent Monday evening.

Senate Appropriations Chairman Richard Shelby, an Alabama Republican, told reporters Monday that his staff had been in discussions with the White House about the looming request.

The news comes on the eve of a briefing Tuesday morning on the coronavirus for all senators in a classified setting, two sources with knowledge of the plans tell CNN.

Along with the $1.25 billion emergency funding request, the White House requested that an additional $535 million in emergency funding previously appropriated for the prevention and treatment of Ebola be redirected toward the effort to counter coronavirus.

"Tremendous progress has been made on Ebola and the current national response priority should be" coronavirus, the letter states, noting that "these two proposals would make $1.8 billion in new resources available for the current response."

House Speaker Nancy Pelosi called the funding effort "long overdue and completely inadequate to the scale of this emergency," promising a House funding package that would better address the issue.

The California Democrat pointed to Trump's proposed budget cuts to the Centers for Disease Control and Prevention, arguing that "weeks after the Trump Budget called for slashing the CDC budget during this coronavirus epidemic, this undersized funding request shows an ongoing failure to understand urgent public health needs."

"It is profoundly disturbing that their answer now is to raid money Congress has designated for other critical public health priorities," she said, adding that House Democrats would move to "enact a robust package that fully addresses this global emergency without allowing this administration to steal from other necessary programs."

Senate Minority Leader Chuck Schumer, a New York Democrat, dismissed the request as "too little too late," calling President Donald Trump's move to repurpose Ebola funding "indicative of his towering incompetence and further proof that he and his administration aren't taking the coronavirus crisis as seriously as they need to be."

"We've seen no sign that President Trump has any plan or urgency to deal with the spread of the coronavirus -- we need real leadership and we need it fast," Schumer added.

The US now has 35 confirmed cases of the coronavirus. More than a dozen Americans who tested positive for the disease returned to the US this week after spending weeks in isolation on the luxury cruise ship Diamond Princess docked in Japan.

Trump had downplayed concern about the contagion on Sunday as he departed the White House for India, claiming his administration has the virus "very much under control in this country."

This story has been updated to add congressional Democrats' reaction.