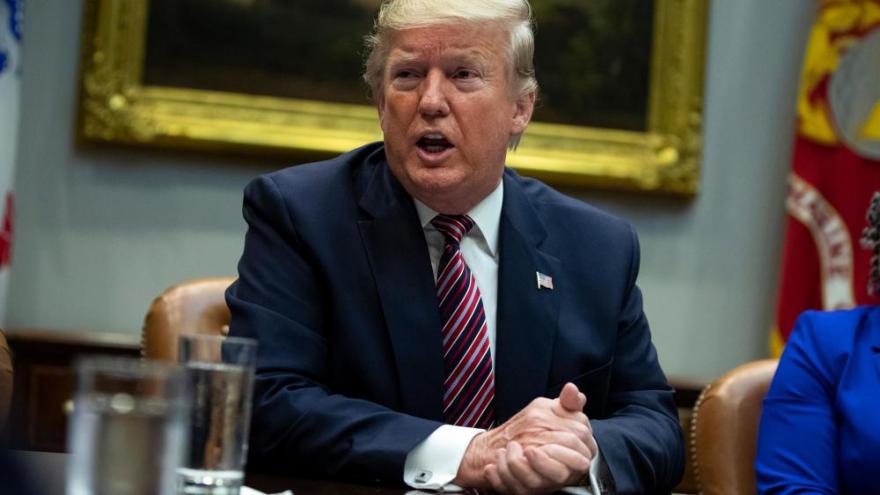 The White House blasted the House's impeachment inquiry as "completely baseless" and a "reckless abuse of power" ahead of a deadline set by House Democrats for the White House to say whether it would participate in the impeachment proceedings.

(CNN) -- The White House on Friday blasted the House's impeachment inquiry as "completely baseless" and a "reckless abuse of power" ahead of a deadline set by House Democrats for the White House to say whether it would participate in the impeachment proceedings.

"As you know, your impeachment inquiry is completely baseless and has violated basic principles of due process and fundamental fairness," Cipollone wrote in a two paragraph letter. "Adopting articles of impeachment would be a reckless abuse of power by House Democrats, and would constitute the most unjust, highly partisan, and unconstitutional attempt at impeachment in our Nation's history."

While the letter letter doesn't specifically state the White House won't participate, that's what it means, according to a senior administration official.

"The letter communicates that we will not participate in this process," the official said.

Nadler responded to the White House's refusal to participate, saying, "If the President has no good response to the allegations, then he would not want to appear before the Committee."

"Having declined this opportunity, he cannot claim that the process is unfair," he continued. "The President's failure will not prevent us from carrying out our solemn constitutional duty."

The White House's decision removes one potential hurdle to the House voting on articles of impeachment before Christmas. After Monday's hearing where two committees will present their evidence, the Judiciary panel could debate and approve articles as soon as the end of next week.

The White House's Friday letter was not a big surprise, given that the President's lawyers already declined to participate in the Judiciary Committee's first hearing. Cipollone concluded the brief letter by quoting Trump's tweet from earlier this week: "Whatever course you choose, as the President has recently stated: 'if you are going to impeach me, do it now, fast, so we can have a fair trial in the Senate, and so that our Country can get back to business.'"

Cipollone sent the letter after Nadler last week gave the White House a Friday deadline to tell the committee whether Trump's lawyers would participate in the House impeachment proceedings beyond the first hearing.

The House-passed rules for the impeachment proceedings gave the President's counsel the ability to participate in the Judiciary Committee hearings. The rules state that the President and his counsel were invited to attend committee presentations of the evidence — which are happening on Monday — as well as ask questions, raise objections, request witnesses or make a concluding presentation.

"The American people deserve transparency," Nadler said after the White House said it would not participate in the first Judiciary Committee hearing. "If the President thinks the call was 'perfect' and there is nothing to hide then he would turn over the thousands of pages of documents requested by Congress, allow witnesses to testify instead of blocking testimony with baseless privilege claims, and provide any exculpatory information that refutes the overwhelming evidence of his abuse of power."

Republicans have accused Democrats of offering the White House any due process only at the very end of the proceedings, after the bulk of the work was conducted in the House Intelligence Committee where the President's lawyers could not participate.

And they argue the process still isn't fair, given that Republicans have not gotten to call and equal number of witnesses as the Democrats or a requested hearing with Republican witnesses.

While the White House indicated Friday that it wouldn't take part in the House impeachment proceedings, House Judiciary Republicans formally requested witnesses whom Trump and his allies have been pushing to testify.

Collins wrote that the committee should call "each of the witnesses listed above to testify before this Committee to ensure a full evaluation of the facts and to cure the procedural and fairness defects injected into these proceedings by Chairman Schiff."

Collins requested that subpoenas be issued for all of the witnesses they had requested besides Schiff.

The other GOP-requested witnesses were Democratic National Committee contractor Alexandra Chalupa, Fusion GPS contractor Nellie Ohr, former Burisma board member Devon Archer and the intelligence community employee whom Lt. Col. Alexander Vindman did not identity during his testimony before the House Intelligence Committee.

Many of these witnesses had also been requested by Republicans during the House Intelligence Committee hearings. Democrats blocked those requests, which Schiff dismissed as an attempt to "undertake the same sham investigations into the Bidens or 2016 that the President pressed Ukraine to conduct for his personal political benefit."

Also on Friday, the chairmen of the House Intelligence, Oversight and Reform, and Foreign Affairs committees transmitted the final version of their impeachment report to the Judiciary Committee, according to an aide working on the inquiry, along with a copy of House Republicans' own report rejecting the Democrats' allegations.