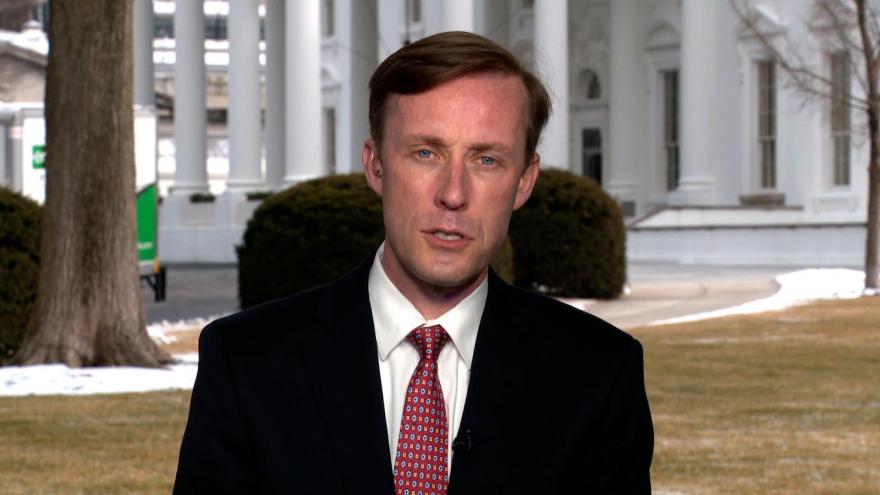 (CNN) -- The US will be taking a series of steps to respond to the devastating SolarWinds cyber hack and hold accountable those responsible in "short order," national security adviser Jake Sullivan told CNN's Christiane Amanpour on Friday.

"We are in the process now of working through, with the intelligence community and [President Joe Biden's] national security team, a series of steps to respond to Solar Winds, including steps that will hold who we believe is responsible for this and accountable, and you will be hearing about this in short order," Sullivan said. "We're not talking about months from now, but weeks from now, that the United States will be prepared to take the first steps in response to solar winds."

Earlier this week Biden administration officials had estimated that the US government's probe into the attack would take "several months" at least.

Sullivan made the comments in a wide-ranging interview that also touched on Biden's review of Afghanistan policy, the administration's diplomatic effort to find a way to resume negotiations with Iran, and the murder and dismemberment of Washington Post journalist Jamal Khashoggi.

The administration will soon send Congress an unclassified report on killing of the Saudi royal-insider who fell out with Crown Prince Mohammed bin Salman before his death in October 2018, Sullivan said.

'We can go further'

Asked about Solar Winds, Sullivan said the Biden administration is also focused on identifying more precisely the culprit behind the suspected Russian spying campaign that targeted at least nine federal agencies and at least 100 private-sector businesses. The massive breach came to light in the waning days of the Trump administration.

"Right after President Biden took office, he tasked the intelligence community with an assessment of the scope and scale of this attack," Sullivan said, speaking from the White House grounds. "And he also asked the intelligence community to provide him with an updated capacity to attribute exactly who conducted it. What the previous administration said was, quote, 'that it was likely of Russian origin.' We believe we can go further than that."

Sullivan would not offer more detail on what form the US response will take, but said, "We are not simply looking at the question of sanctions, we're looking at a broad range of responses some of which, Christiane, are not just about imposing costs but are actually about hardening our own defenses so that this kind of thing does not happen again."

He added that there is also "intense work underway now to remediate this specific hack and ensure that the threat actor is expunged from federal government systems on a forward-going basis."

Asked about the administration's Thursday announcement that it is willing to sit down with Iran and other countries to discuss how to restart negotiations on the fraying international deal that put limits on Iran's nuclear program, Sullivan said, "We believe it is totally possible to come to a diplomatic solution," but stressed it is "an early stage."

"It is going to take work and hard-headed clear-eyed diplomacy, and ultimately a decision by Iran that they are prepared to take the steps required to assure the world and to prove to the world that the program is exclusively for peaceful purposes," he said.

But he raised a concern about Iran's steady violations of the deal, which President Donald Trump pulled the US from in 2018.

"What we have said repeatedly is that the United States is prepared to come back into compliance with its terms, if Iran comes back into compliance with its terms under the deal, and frankly, Christiane, one of the concerns right now is that Iran is presently threatening to move even further out of compliance, to refuse to cooperate with the International Atomic Energy Agency in the work that it is trying to do to ensure that nothing in Iran's program is being used for weapons purposes," Sullivan said.

"So I think that the first order of business here would be for the Iranians to take the decision, to stop the process of moving further out of compliance, and then I believe that there is a diplomatic pathway to getting to the ultimate agreement in which we can all have confidence that Iran's nuclear program has a lid on it," he said.

Sullivan also said that Biden is "looking hard" at US policy on Afghanistan and at the US-Taliban agreement made by the last administration, which sets a May 1 deadline for the withdrawal of remaining US troops and established requirements for the Taliban as well.

Biden is looking at that in close consultation with allies, partners on the ground and will make "a determination in the coming weeks" about the way forward for the United States and Afghanistan.

Sullivan said the Biden administration will soon send Congress an unclassified report on the grisly killing of Khashoggi in October 2018.

"Congress has passed a law actually mandating that the administration release an unclassified version of the report of accountability and responsibility for the brutal and grisly murder of Jamaal Khashoggi," Sullivan told Amanpour. "We intend to comply with that, we intend to do soon."

Sullivan said he didn't have a precise date when the report would be released to Congress, but said, "It will not be very much longer."

"We will accompany that announcement with our answer, our further answer to how we will ensure that there is accountability for that murder," Sullivan said.

An independent 2019 report by the UN's special rapporteur laid out detailed evidence that Saudi Arabian officials at the highest levels planned and carried out Khashoggi's murder and dismemberment at the Saudi consulate in Istanbul. These Saudis also discussed how they would hide the murder of the royal insider-turned-critic from the international community, the report said.

Saudi Arabia later announced "final verdicts" against eight suspects in September and sentenced five of them to 20 years in prison. Charges were dismissed against the most high profile figures involved, including former deputy intelligence chief Ahmed al-Assiri and Saudi Consul-General at the Istanbul consulate Mohammed al-Otaibi.