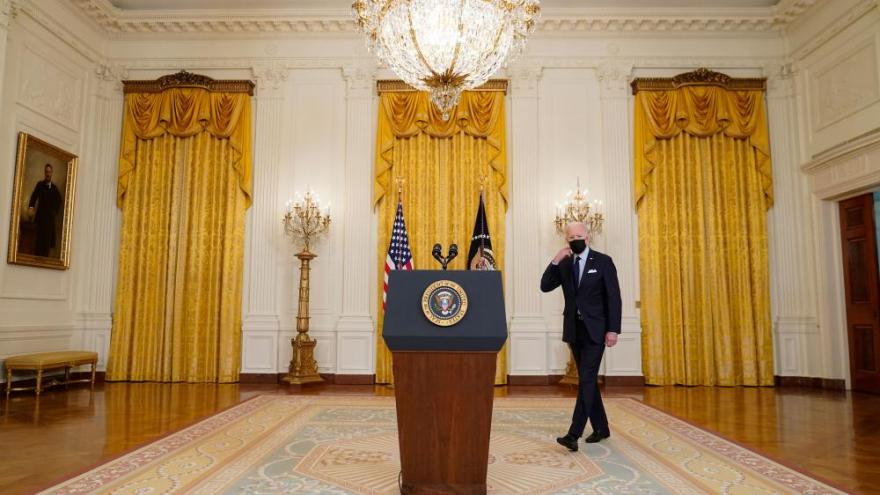 President Joe Biden will receive a regular physical exam later this year, the White House said Tuesday, setting a timeline for when the oldest first-term president in US history might provide more information about his health.

(CNN) -- President Joe Biden will receive a regular physical exam later this year, the White House said Tuesday, setting a timeline for when the oldest first-term president in US history might provide more information about his health.

The last extensive update on Biden's medical state came in December 2019, when the doctor he eventually recruited to serve as White House physician described him as "a healthy, vigorous, 77-year-old male, who is fit to successfully execute the duties of the Presidency."

Biden, now 78, hasn't released a full report on his health since. But he plans to undergo a check-up at some point over the next eight months.

"The President is planning to have a checkup later this year, and the results will be released to the public," said White House spokesman Andrew Bates.

Biden is not behind in releasing medical information compared to his recent predecessors, who waited a full year before undergoing a physical and authorizing details to be released publicly.

President Donald Trump's first physical as president took place in January 2018, followed by a now-infamous press conference by Dr. Ronny Jackson -- now a Republican congressman from Texas -- who described Trump as in "excellent health" despite evidence of heart disease and borderline obesity.

President Barack Obama's first physical was in February 2010, followed by a written read-out by his doctor, who also used the term "excellent health" to describe the commander-in-chief while noting his struggle to quit smoking.

It's not uncommon for a president to name his own physician when taking office, though Biden's two most recent predecessors each retained the incumbent doctor who had attended the men who served before them.

In the 2019 report, O'Connor wrote Biden was being treated for non-valvular atrial fibrillation, or AFib -- an irregular heartbeat that O'Connor said Biden wasn't experiencing symptoms of. He was taking Crestor to lower cholesterol and triglyceride levels, as well as Eliquis to prevent blood clots, Nexium for acid reflux, and Allegra and a nasal spray for seasonal allergies.

"He takes three common prescription medications and two common over-the-counter medications," O'Connor wrote. "He has no known medical allergies. He does not use any tobacco products, does not drink alcohol at all, and he works out at least five days a week."

The most significant medical event in Biden's history, his doctor wrote, came in 1988, when he suffered a brain aneurysm. During surgery, doctors found a second aneurysm that had not bled, which they also treated.

"He has never had any recurrences of any aneurysms," O'Connor wrote.

Since that report, the only update on Biden's health came after he fractured his foot in November while playing with his dog, Major. In February, his physician said the foot fractures "are completely healed."

The White House has been asked at three points over the past month when Biden might go for a physical exam. In late February, asked if they would commit to "releasing a comprehensive health report in the near future," press secretary Jen Psaki said "absolutely we will do that" but didn't offer a timeline. She said she would "check and see when he's due to go back to the doctor" on whether he would travel to Walter Reed for a physical.

A week later, Psaki said she did not have an update on timing for release of health records.

On Friday, Psaki said again she did not have an update.

"Certainly, when he has his next medical appointment, we will be transparent about that and provide that information to all of you," she said, adding she wasn't aware of a physical exam being scheduled.