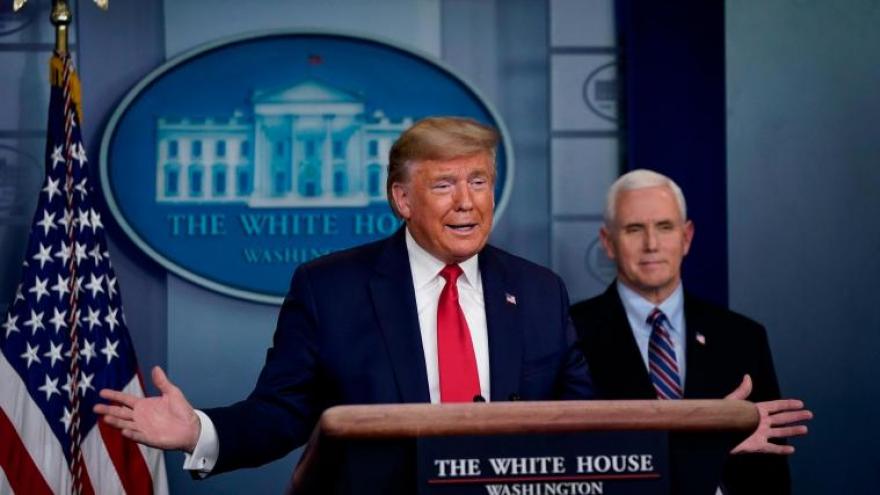 The White House will give rapid Covid-19 tests to anyone who will come in close proximity with either President Donald Trump and Vice President Mike Pence, CNN has confirmed.

(CNN) -- The White House will give rapid Covid-19 tests to anyone who will come in close proximity with either President Donald Trump and Vice President Mike Pence, CNN has confirmed.

"As the physician to the President and White House Operations continue to protect the health and safety of the President and vice president, starting today anyone who is expected to be in close proximity to either of them will be administered a Covid-19 test to evaluate for pre-symptomatic or asymptomatic carriers status to limit inadvertent transmission," said deputy White House press secretary Judd Deere in a statement.

White House officials are declining to specify what counts as "close proximity" but one official said members of the White House press corps who participate in the daily briefings will not have to take the tests.

As the administration has worked on its response to the pandemic, Trump has continued to meet with outside industry representatives, brief the press with his White House coronavirus task force and interact with his staff and advisers in person. Sometimes, both the President and those around him have not been practicing social distancing guidelines suggesting six feet between each person.

Both Trump and Pence have also continued to travel. Last week, Trump saw the USNS Comfort hospital ship set sail for New York. And this week, Pence visited a Walmart distribution facility, where he was not practicing social distancing with the facility's employees.

These continued meetings and interactions with staff, advisers and outside groups add up to, at the very least, dozens of close points of contact a day.

The White House has been conducting temperature checks for those close to Trump and Pence since March 14.

Trump has twice tested negative for the virus, according to the White House.

On Thursday, Trump said the results for his second test, administered through the White House physician's office, was available in 15 minutes.

Trump said he took the new test "really out of curiosity to see how quickly it worked, how fast it worked."

There have also been efforts to slim down staff within the White House to prevent coronavirus transmission.

In the executive residence, staff responsible for building upkeep and social events has dwindled, with some working from home and others being told to be on call or in rotation.

The decision to encourage social distancing among White House staff also appears to extend to some of the highest staff positions within the West Wing, such as Ivanka Trump.

The President's daughter and senior adviser told Yahoo Finance on Tuesday that she's also working from home when it's possible.

The decision to rapid test those around Pence and Trump follows at least one scare where both the President and the vice president appeared to be near an infected individual.

The first coronavirus test administered to Pence and Trump came in the wake of an outbreak among a Brazilian delegation that met with Trump in Florida.

At least one of those delegation members who tested positive was photographed standing next to Trump and Pence during their visit to the President's Mar-a-Lago estate.