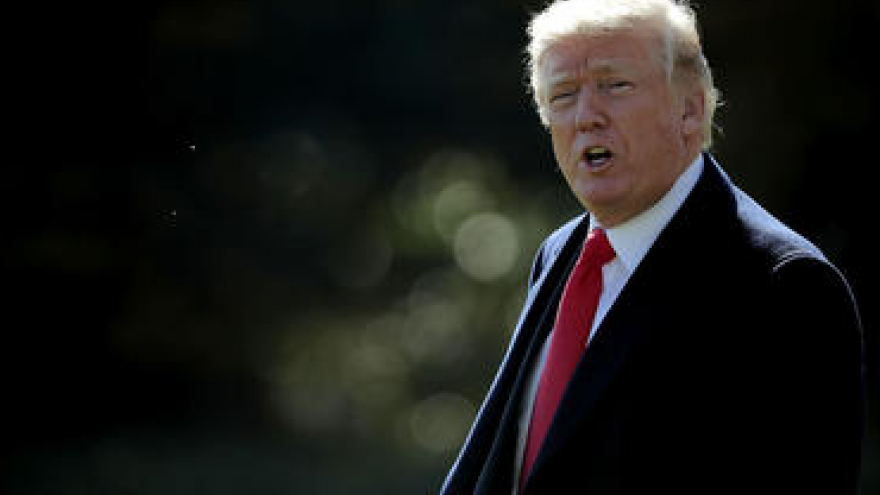 WASHINGTON (AP) — The Latest on U.S.-China trade (all times local):

President Donald Trump has taken the first step in imposing tariffs on nearly $50 billion worth of Chinese imports.

The order signed Thursday is aimed at punishing Beijing for stealing American technology and pressuring U.S. companies to hand it over. Trump says the U.S. and China have "the largest (trade) deficit of any country in the history of our world" and blames that deficit for lost American jobs.

He says the move will make the U.S. a "much stronger, much richer nation."

The Trump administration is readying restrictions on Chinese investment and tariffs on nearly $50 billion worth of Chinese imports to punish Beijing for stealing American technology and pressuring U.S. companies to hand it over.

China is already warning that it will take "all necessary measures" to defend itself, raising the prospect of a trade war between the world's two biggest economies.

The White House says President Donald Trump will direct the Office of the U.S. Trade Representative to publish a list of proposed tariffs for public comment within 15 days. USTR has already identified potential targets: 1,300 product lines worth about $48 billion. The president is also asking Treasury Secretary Steven Mnuchin to come up with a list of restrictions on Chinese investment.

U.S. Trade Representative Robert Lighthizer is spelling out which countries will get an early reprieve from the imposition of tariffs on imported steel and aluminum.

Lighthizer is testifying before the Senate Finance Committee. Democratic Sen. Ron Wyden of Oregon asked him which countries will be exempted from the looming tariffs, "as of tomorrow." Lighthizer said President Donald Trump has decided to "pause" the tariffs for countries that are engaged in trade negotiations with the United States.

Lighthizer says Canada and Mexico are on that list. He also specifically named Europe, Australia, Argentina and Brazil.

The president is planning to impose tariffs of 25 percent on imported steel and 10 percent on aluminum — sanctions that are meant to hit China for flooding the world with cheap steel and aluminum.

Lawmakers are calling on the Trump administration to provide more clarity on which countries will be exempted from looming tariffs on steel and aluminum.

Sen. Orrin Hatch, the Republican chairman of the Senate Finance Committee, says he's disappointed in the decision to impose global tariffs on a problem caused by China.

He says the tariffs are slated to take effect in less than a day, but there has been no clarity on country exemptions, and the process companies use to request tariff relief is "prolonged and unnecessarily cumbersome."

Sen. Ron Wyden, the committee's ranking Democrat, says the president came into office promising better trade deals, but what mostly has been delivered is "chaos."

The lawmakers are speaking as U.S. Trade Representative Robert Lighthizer testifies before the committee.

Farmers, electronics retailers and other U.S. businesses are bracing for a backlash as President Donald Trump targets China for stealing American technology or pressuring U.S. companies to hand it over.

The administration is expected to impose trade sanctions on China later Thursday. The penalties could restriction Chinese investment and affect billions of dollars' worth of Chinese products. Trump is set to sign a memorandum on the issue.

The U.S. has conducted a seven-month investigation into the tactics China has used to challenge American supremacy in technology.

The administration argues that years of negotiations with China have failed to produce results.