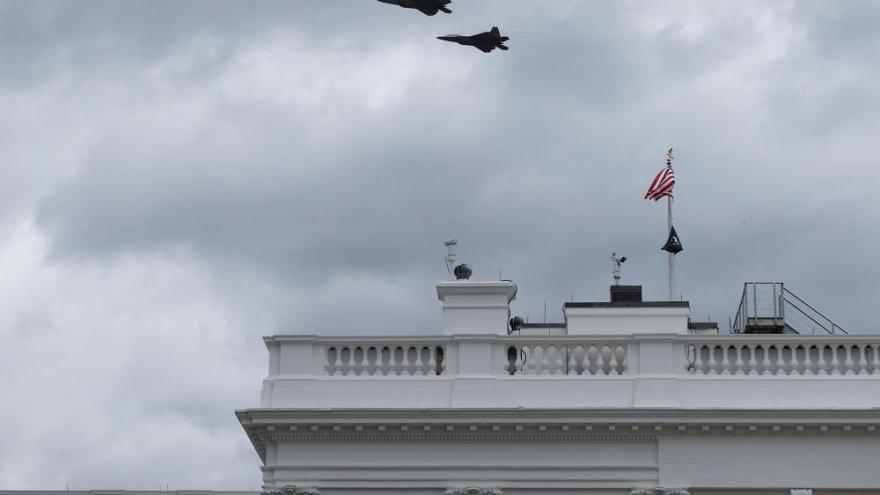 Two military aircraft fly over the White House on April 16, 2021 in Washington, DC. The US Air Force F-22 fighter aircraft flew over Washington as part of the World War I memorial dedication ceremony.

(CNN) -- Low-flying F-22 Raptors momentarily interrupted the White House press briefing on Friday as their roar could be heard and felt in buildings in and around downtown Washington.

While describing President Joe Biden's upcoming schedule for next week, White House press secretary Jen Psaki had to pause and say: "Wow -- there's a plane right overhead, just for anyone tuning in online." She was nearly drowned out by the noise as the planes passed.

The flyover was part of the World War I Centennial Commission's inaugural raising of the US flag at a new World War I Memorial in Washington, DC, along Pennsylvania Avenue, which took place at about the same time the briefing began on Friday morning. The memorial is expect to open to the public on Saturday.

The military flyover was conducted with the US Air Force's 94th Fighter Squadron, according to a list of performances.

The squadron operates the F-22 Raptor, referred to as the world's most advanced air dominance fighter.

Military aircraft are often heard, spotted or felt around the nation's capital during special events, national holidays and air shows.

In 2019, F-35 fighter jets flew across the White House as part of President Donald Trump's welcome to Polish President Andrzej Duda. Military flyovers were also conducted during July 4 ceremonies in 2019 and 2020 on the National Mall.