White House prepares to roll out climate actions to help meet Biden's goals, with or without Congress 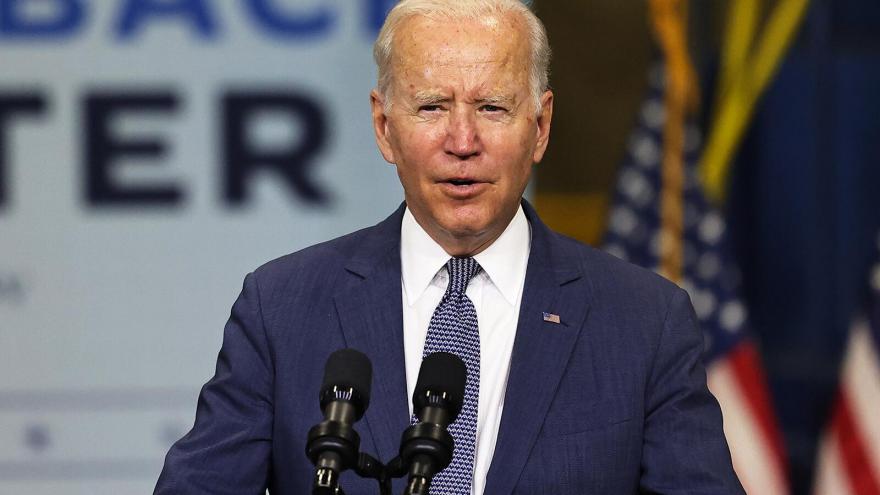 (CNN) -- The White House is preparing to roll out a slate of executive actions and federal regulations to help President Joe Biden hit his ambitious climate goals as negotiations continue to stall in Congress, two people who attended a Monday meeting with White House officials told CNN.

White House national climate adviser Gina McCarthy and other top officials have been working on executive actions, agency regulations, and state and federal climate partnerships that can help achieve Biden's target of slashing 50-52% of US greenhouse gases below 2005 levels by 2030.

McCarthy and National Economic Council director Brian Deese briefed climate and environmental groups on the scope of their plans on Monday.

The timing of these actions is still being determined and could come during COP26, the UN climate summit in Glasgow, or even after it ends.

White House officials are waiting to see if lawmakers can reach a deal on the climate and social safety net bill, two of the people at the meeting told CNN. The hope is to release a plan that will include new investments from Congress alongside existing and new regulatory and executive actions on climate, even as the fate of the congressional package is uncertain.

The White House declined to comment about the specifics or timing of its climate plans.

The suite of actions includes new regulation proposals from the Environmental Protection Agency focused on stopping methane leaks from oil and gas producers expected later this week, as well as future proposed regulations on mercury and reducing emissions from power plants.

US Special Presidential Envoy for Climate John Kerry's office has been working to convince companies to commit to climate financing that would push the US toward green energy.

The White House is also exploring forging a deeper partnership with 25 states that are taking their own climate actions. The White House was previously looking at scheduling a climate meeting with governors before COP26, but it has been pushed until after the international summit, a state official familiar with the plans told CNN.

Biden is heading to Glasgow on Thursday with the fate of his legislative climate agenda unclear, and administration officials don't plan to solely rely on Congress to achieve Biden's emissions goals.

But action from Congress is a crucial piece; recent independent analysis from Rhodium Group found Biden would fall far short of his 50-52% goal without legislative investments in clean energy.

Passing both the bipartisan infrastructure bill and Democrats' sweeping economic package combined with federal and state regulatory action could get the US close to Biden's goal of cutting greenhouse gas emissions in half by the end of the decade, a Rhodium analysis found.

If Congress fails to pass robust climate measures and new regulations are not implemented, greenhouse gas emissions would only be reduced by 17-25% by 2030 -- between 1.7-2.3 billion tons short of what the President needs to hit his target.

"There's not going to be one big thing that Congress or EPA or states do that just solves it," John Larsen, director at Rhodium Group, told CNN recently. "There will be a few actions that are going to have outsized impact on their own like a congressional bill, but no one should look to Congress and expect that's the lion's share of the contribution."