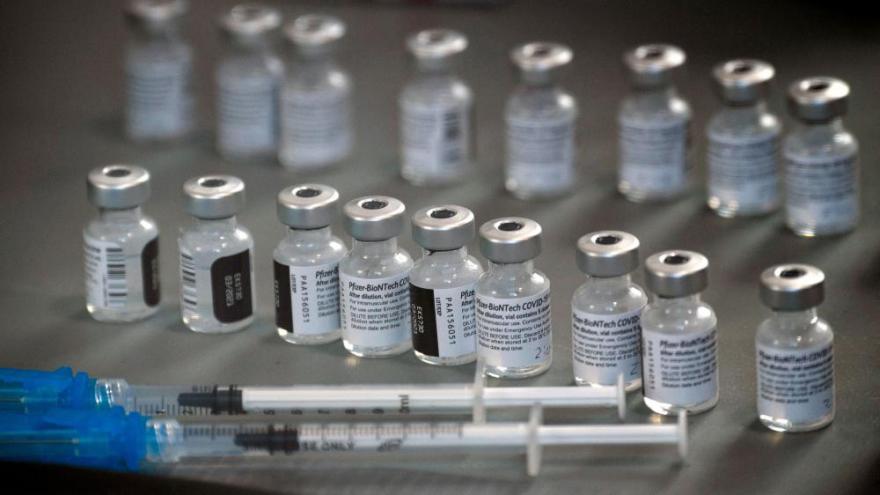 President Joe Biden finalizes his plan to distribute millions of coronavirus vaccines worldwide after months of deliberation, according to multiple sources familiar with the plans.

(CNN) -- President Joe Biden has finalized his plan to distribute millions of coronavirus vaccines worldwide after months of deliberation, according to multiple sources familiar with the plans.

Secretary of State Antony Blinken hinted earlier that an announcement was imminent, and the sources familiar with the plans said that officials could reveal it as soon as Thursday or Friday.

"In a few short days, in fact possibly as early as tomorrow, the President is going to announce in more detail the plan that he's put together to push out 80 million vaccines around the world that we have at our disposal or soon will have at our disposal," Blinken said Wednesday at the US Embassy in Costa Rica.

Touting the US contribution of $2 billion to the World Health Organization vaccination effort, COVAX, and another $2 billion pledge to be given between now and the end of 2022, Blinken told CNN Español on Wednesday that the US will distribute the doses without strings attached.

"But here's what's important: We'll distribute those vaccines working in coordination with COVAX, doing some of the work directly ourselves, we'll do it on the basis of equity. We'll do it on the basis of science, of need, and we will do it without political strings attached, which has not been the case, or some other countries that have been engaged in providing vaccines."

This week, officials will detail which specific countries are getting vaccines while cautioning that this is expected to be a lengthy, complicated process, according to a person familiar with the deliberations.

For months, administration aides and federal health officials have deliberated over the best way to share additional vaccines doses. The US has come under intense pressure to help other nations, and several of Biden's top aides -- and the President himself -- have fielded requests from allies to help. Jeff Zients, the White House's Covid-19 response coordinator whom Biden recently tapped to lead efforts to address the pandemic globally, has worked in close coordination with national security adviser Jake Sullivan, sources say.

Administration officials are expected to lay out the criteria they've agreed on to determine which countries get doses. It remains to be seen whether the US will unilaterally decide which countries get which vaccines, or whether the international vaccine initiative known as COVAX will play a major role in deciding who gets them. It could also be a combination of both, officials say.

One of the most complicated parts of the decision-making process has been the enormous operational undertaking that sharing vaccines will require. Zients and Sullivan have worked with multiple federal agencies, including the Defense Department and State Department, to coordinate this, in addition to diplomatic counterparts.

Two big factors that will matter are quality control and a country's public health infrastructure.

Right now, only vaccines made by of Moderna, Pfizer and Johnson & Johnson will be distributed, an official told CNN.

Biden said in May the US would send 60 million AstraZeneca vaccine doses to other countries by July Fourth. But, as of Wednesday evening, those doses had not cleared a federal safety and efficacy review conducted by the US Food and Drug Administration, another official said.

"We want to lead the world with our values, with this demonstration of our innovation and ingenuity, and the fundamental decency of the American people," he added.

While Covid-19 cases have dropped in the US alongside an aggressive vaccination campaign, the Biden administration's global vaccination effort comes as many countries continue to struggle with the virus.

While India's Covid-19 outbreak made headlines recently, cases also skyrocketed in countries around India, from Nepal in the north to Sri Lanka and the Maldives in the south. And it's not just India's neighbors -- further away in Southeast Asia, infections have also surged in Thailand, Cambodia and Indonesia.

The rapid resurgence of the virus has placed enormous pressure on the health systems and medical supplies of these countries, and fueled fresh calls for international assistance amid the deepening crisis.