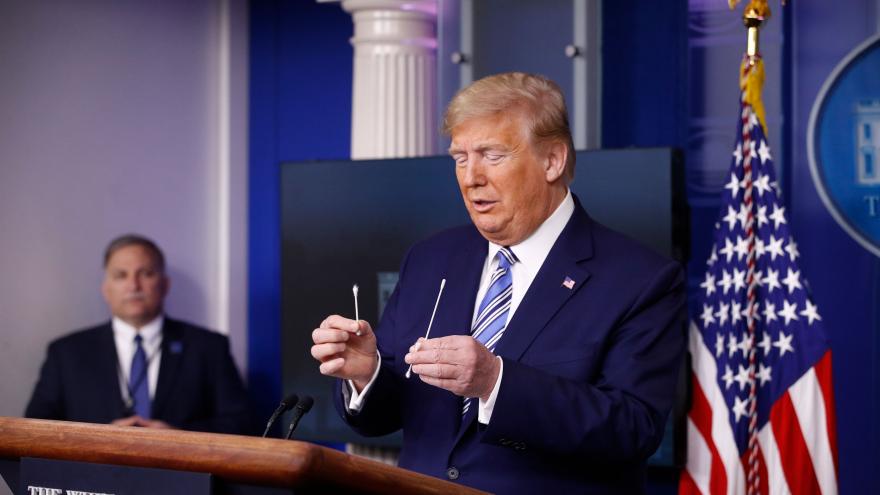 (CNN) -- President Donald Trump announced Sunday he will compel a US company to make swabs under the Defense Production Act.

Two people familiar with the decision tell CNN that company is Puritan Medical Products, which is based in Maine. It is known for making "flocked swabs," which it says are better at collecting specimens than others.

Trump said the administration had experienced "difficulty" with the company, but did not elaborate further. Puritan did not immediately respond to CNN's request for comment.

"We've had a little difficulty with one so we'll call in -- as we have in the past as you know -- we are calling in the Defense Production Act and we'll be getting swabs very easily," Trump said.

Last week the FDA touted a new alternative swab it approved that could eventually allow people to collect their own samples for coronavirus diagnostic testing at home. One company making those swabs, U.S. Cotton, says they aren't ready yet.

Working with the FDA, U.S. Cotton designed a shorter swab than the kind typically used by health care workers. The new swab is shorter and can collect a sample from the front of the nose, instead of the others that are long and must be directed deep into the nose, which can be painful.

John Nims, the president of U.S. Cotton, said Friday it isn't quite prepared to start shipping those new swabs yet but he hopes to begin doing so in "a couple weeks." Once it does, the company aims to ship 3 million a week until the swabs are no longer needed, according to Nims.