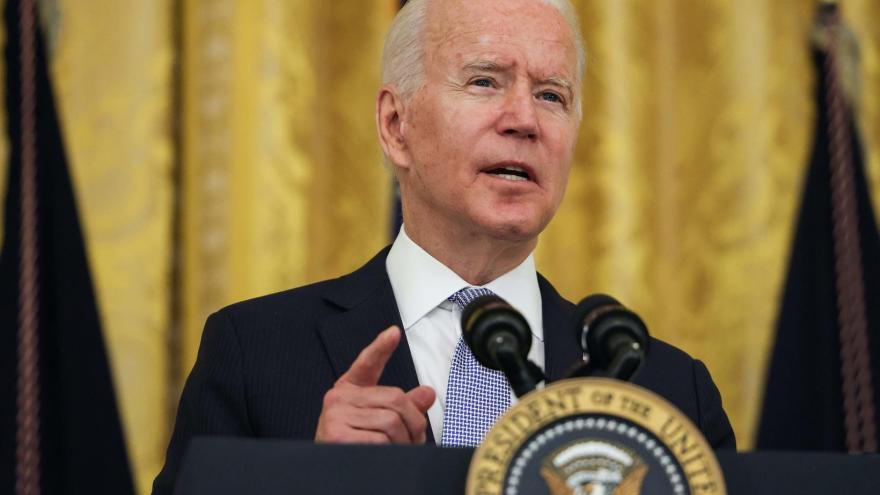 (CNN) -- The White House is making a concerted effort to return the focus of President Joe Biden's schedule to Covid-19 this week as the year-and-a-half-long pandemic again consumes his agenda amid a new spike in cases.

The President has multiple events focused on the nationwide, and global, effort to vaccinate more people and combat the spread of variants, an opportunity to reset the administration's messaging after a series of announcements last week left many Americans confused about the state of the virus.

The President will meet with his coronavirus team in the Oval Office on Monday after they spent the weekend reviewing the latest data and preparing virtually for the week ahead. The White House announced Monday afternoon that the nation hit the milestone of 70% of US adults getting at least one Covid-19 vaccination shot -- nearly a month after Biden's initial goal of hitting that benchmark by July Fourth. That number was not yet reflected in US Centers for Disease Control and Prevention data.After updating Biden, the group of public health officials is scheduled to take questions from reporters. Although these appearances initially happened three times a week, they were scaled back in recent months as officials felt there were fewer updates to share. The recent surge of the Delta variant has changed that thinking.

The White House made a deliberate choice to hold their public briefing on Monday this week with the hope of developing a clearer line of messaging for the days ahead. Officials spent last week frustrated, believing they weren't effectively communicating the latest information as they rolled out a series of new measures designed to slow the spread of the highly contagious Delta variant.

While there is consensus on the set of stricter measures among Biden's aides, officials lamented the poor communication to an understandably confused American public. They also accused some in the media of hyperbolic coverage.

Asked during a briefing with CNN about the White House's mistakes in messaging and what they plan to do, an official pushed back on the question, but said the administration will continue to use everything in their power to push vaccines -- adding that the White House needs to change as the data changes.

The official reiterated a national mandate for all Americans to be vaccinated is not under consideration, saying the White House has determined it is not within Biden's power as president.

But the official did not rule out a stricter mandate on federal workers that goes beyond the announcement the President made last week that federal employees must attest to being vaccinated or face stringent mitigation measures. That was only a first step, the official said, designed to make life more difficult for those federal workers who decline to be vaccinated. Biden has asked his team to take a hard look at what authorities he has as it relates to federal workers, and the White House continues to look at all of those options, including within different subsets of the federal government.

But one senior administration official told CNN that some of the problems are being caused by political decisions.

"I think there are governors in this country who are putting their political interests ahead of public health," the senior administration official said, without naming the governors.

A scramble to get back on track

On Tuesday Biden is scheduled to give a speech on increasing vaccinations at home and abroad. The White House sees the global vaccination drive as more important than ever, one official said, given it's a way to tamp down on the spread of potential new variants that could reach the US.

On Wednesday Biden will meet with the Dr. Eric Lander, the director of the Office of Science and Technology Policy, to discuss his plan for preparing for future pandemics.

There's a chance the White House could add another coronavirus-related event to Biden's schedule, depending on how the week plays out.

Biden had once hoped to move on from coronavirus to focus on other areas of his governing agenda, including the bipartisan infrastructure deal that is making its way through Congress. But the pandemic has warped those plans as millions of Americans have not got their vaccinations and cases rise.

The renewed focus comes as the country grapples with the Delta variant, more contagious and may cause more severe illness than previous strains of coronavirus. The variant is spreading faster in areas of the country with low vaccination rates and threatening to derail much of the progress the nation has made in combating the pandemic.

The White House is racing to get the rest of the population vaccinated and continuously touts the safety and efficacy of the Covid-19 vaccines that have received emergency use authorization in the US. More than 99.99% of people fully vaccinated against Covid-19 have not had a breakthrough case resulting in hospitalization or death, according to the latest data from the CDC.

On Sunday, the US reported 816,203 more Covid-19 doses administered, which was the fifth straight day recording more than 700,000 shots in arms. The current seven-day average of doses administered is 662,529 per day — the highest average since July 7.

According to the CDC, 49.6% of the US population is fully vaccinated. The number is 58.1% among vaccine-eligible Americans ages 12 and older.

National Institutes of Health Director Dr. Francis Collins on Sunday credited the rise in vaccinations to the rise in new cases of the Delta variant.

"This may be a tipping point for those who have been hesitant to say, 'OK, it's time.' I hope that's what's happening," Collins said on CNN's "State of the Union." "That's what desperately needs to happen if we're going to get this Delta variant put back in its place."

A senior administration official also told CNN that the CDC is now tracking more than just hospitalizations in breakthrough cases, despite health officials previously telling CNN they were not tracking cases that don't result in hospitalization or death. This official says the CDC is using vast network of health care workers, nursing homes and other facilities to obtain information on breakthrough cases. The official added they are having "constant dialogue" with other countries on tracking these kinds of infections as well.

This senior official declined to provide a more specific number on how many vaccinated people they have found are contributing to the spread of Covid-19. They reiterated that they know it's possible, but still believe those people with breakthrough cases are less likely to spread it than those who are unvaccinated.

Asked about any concerns about children returning to school this fall, a senior administration official said the White House is confident they'll be able to contain cases in school and expect to focus more this week on precautions that schools can take. The administration official was clear they don't want schools to have to contemplate returning to virtual learning.

On children wearing masks, the official added they don't want children to be bullied for wearing masks in school, but said it's more important kids not be exposed to the virus from others who are not wearing masks.