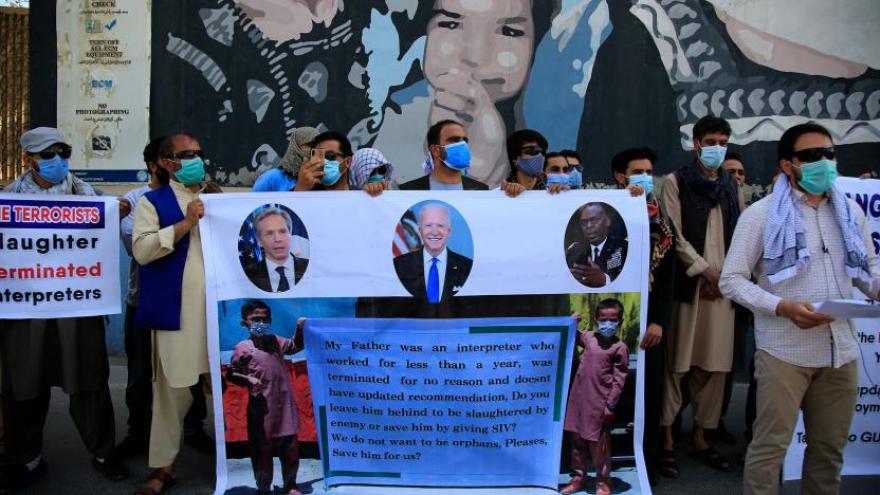 The Biden administration has informed lawmakers it will need roughly $1 billion in emergency funds as it moves to quickly evacuate Afghan translators and other personnel who worked with the US military and are trying to leave the country, according to multiple officials familiar with the matter.

(CNN) -- The Biden administration has informed lawmakers it will need roughly $1 billion in emergency funds as it moves to quickly evacuate Afghan translators and other personnel who worked with the US military and are trying to leave the country, according to multiple officials familiar with the matter.

The administration has not submitted a formal request but did provide briefings in a series of conversations on Friday about securing the additional funds for the State and Defense department efforts to expand and streamline the Afghan special immigrant visa program.

A senior administration official did not weigh in directly on the likely request but said the White House is "working closely with both sides of the aisle on how we can further support those brave Afghans who have supported our work in Afghanistan."

The push for additional funds comes as lawmakers in both parties have ramped up the pressure on the White House to move quickly to address the thousands of Afghans and their families who face imminent danger amid Taliban advances as the US departs the country. The request has bipartisan support -- and could be included in a security supplemental funding package that is being negotiated on Capitol Hill, the sources said.

There's been an acute rise in civilian casualties in Afghanistan since May, according to data from the UN's Assistance Mission to Afghanistan. The rise coincides with international military forces beginning their withdrawal from the country, following President Joe Biden's April announcement of US troops' drawdown.

In some of its most forceful comments to date, the State Department on Friday condemned "recent reports of violence and atrocities against interpreters and other Afghans" by the Taliban and called on the militant group's leadership to both "condemn these atrocities and violations of basic rights" and "proactively prevent their forces from carrying out these actions on the ground."

Sen. Richard Shelby of Alabama, the top Republican on the Senate Appropriations Committee, told reporters that negotiators are "really close" on a deal for the overall funding package, which is primarily designed to direct funds to secure the US Capitol complex in the wake of the January 6 attack.

The Biden administration last week announced that the first group of applicants would be relocated from Afghanistan to Fort Lee in Virginia, and US officials are in talks with additional countries to host Afghans in the pipeline. State Department spokesman Ned Price said the initial tranche is estimated to comprise 2,500 people -- 700 applicants and their immediate family members.

The initial group that is being relocated is a small portion of the overall number of roughly 20,000 Afghans who are in the Special Immigrant Visa pipeline. About half of those 20,000 are in the very preliminary stages of the process and need to take action before the US government can begin processing their cases, a State Department spokesperson said this month.

Other Afghan applicants who are further along in the process but have not been approved will go to US military bases overseas or to third countries. The administration has not publicly announced agreements with possible third countries at this point.