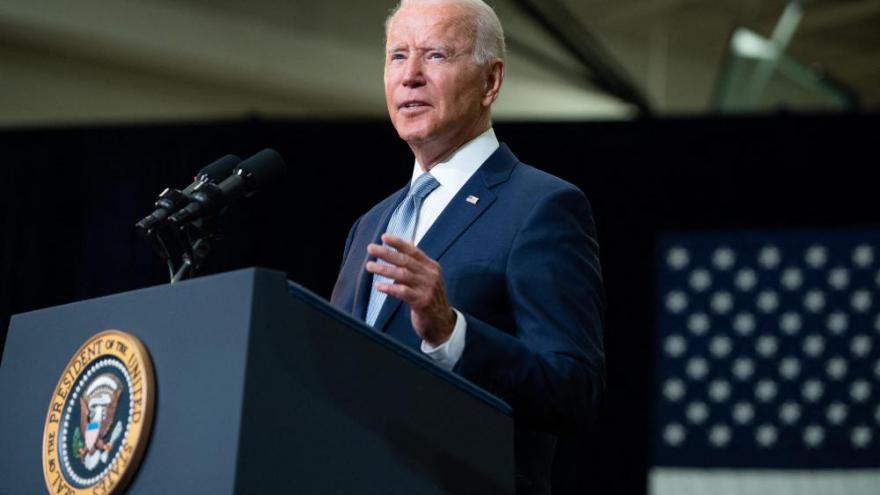 (CNN) -- White House officials have begun laying out the contents of President Joe Biden's sweeping plan to expand the social safety net for its allies inside and outside of Congress as they get ready to move on Capitol Hill without Republican support.

A memo obtained by CNN shows top Biden officials sketching out the key provisions of the plan, which is separate from the bipartisan infrastructure deal that the President celebrated with senators from both parties last month. That bipartisan deal includes heavy investments in "hard" infrastructure like roads, bridges, railroads, pipes and airports.

The memo obtained by CNN lays out the plan to get the second part of a two-track legislative agenda approved and is focused on what Biden calls "human infrastructure." This "human infrastructure" proposal includes large-scale investments in paid family leave, education, child care, health care and clean energy. The memo, the first of its kind outlining the framework of the plan, was sent to members of Congress, top advocacy organizations and think tanks on Friday, according to a source familiar.

The plan also focuses on combating the climate crisis and would provide clean energy tax credit and establish an Energy Efficiency and Clean Electricity Standard. It would create a Civilian Climate Corps to work on conserving public lands and waters and advancing environmental justice. These new initiatives and policies aim to help Biden reach his goal of 100% carbon pollution-free electricity by 2035.

RELATED: Biden wants millions of clean-energy jobs. Can it happen?

The President's proposal would also extend the Earned Income Tax Credit expansion, which was passed under the American Rescue Plan and was the largest expansion to that credit since 2009.

The plan would invest $3 billion in inspecting and removing lead-based paint from 175,000 housing units and $40 billion in improving the quality and energy efficiency of public housing.