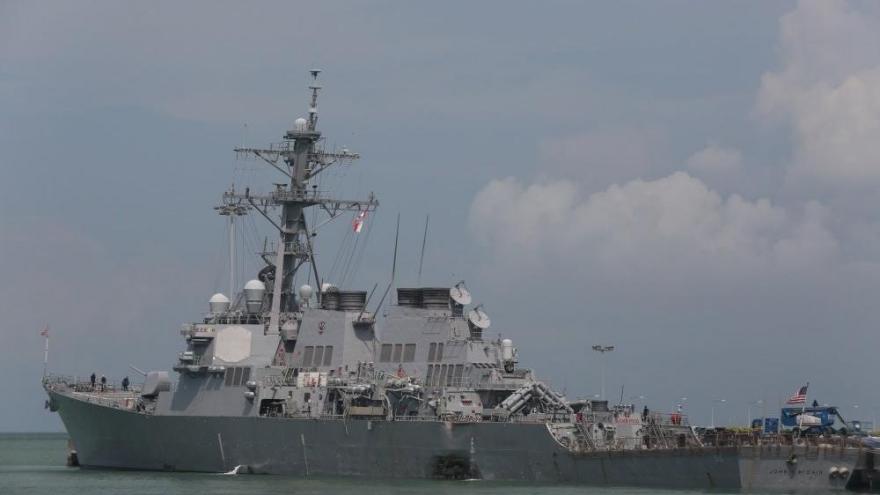 (CNN) -- President Donald Trump and John McCain's long-running feud is back in the spotlight following reports that White House and lower-level US Navy officials traded emails about keeping a warship named from the late senator's father and grandfather out of sight ahead of the President's trip to Japan.

Two Navy officials confirmed to CNN Wednesday night that the White House Military Office asked lower-level US Navy officials about keeping the ship out of view. One of the Navy officials further clarified Thursday morning that the discussion included obscuring the ship or moving it, which was not practical because the ship was under repairs at the time.

"Once leadership heard about it, they said knock it off," a senior Navy official told CNN.

Speaking to reporters Thursday morning before leaving the White House, Trump denied knowing about the plan and said that although he "is not a big fan" of McCain, he wouldn't have supported it.

"Now, somebody did it because they thought I didn't like him -- OK -- and they were well-meaning, I will say. I didn't know anything about it. I would never have done that," he said.

The ship ultimately was not moved nor was anything done to obscure McCain's name, said Cmdr. Clay Doss, a spokesman for the 7th Fleet, and Trump tweeted Wednesday night that he was "not informed about anything having to do with the Navy Ship USS John S. McCain." But the emails underscore Trump's extraordinary and bitter personal feud with McCain, with whom he frequently sparred when the Arizona Republican was alive and even after he passed away from brain cancer in August.

The Wall Street Journal first reported the discussions about moving the ship. The President ultimately spoke to troops at a Memorial Day event aboard the USS Wasp in Yokosuka, Japan.

The Journal reported Wednesday that a tarp was put in place to cover the ship's name since it could not be moved due to repairs, but three Navy officials speaking to CNN pushed back on this claim.

"We didn't do anything to obstruct the name of the ship. The Wall Street Journal piece refers to a photo of a tarp covering the ship, that photo was taken Friday, May 24, the tarp was removed the following day," another US Navy official told CNN.

The official said they had not seen the emails in question, but was adamant nothing had been done to obscure the ship.

Another Navy official with direct knowledge of the matter told CNN that the tarp and paint palette were there for preservation and maintenance purposes, adding that the palette is a typical fixture for docked ships. The official said the ship's commanding officer wasn't aware of the tarp and that it was gone before he arrived on board Saturday.

Doss told CNN on Wednesday that he could confirm "that the picture of the tarp is from Friday and it was taken down on Saturday. Paint barge was also removed ahead of the visit."

Officials pushed back on the Journal's reporting that a barge had been moved so as to obscure the name of the ship. One official said "the barge had been there regularly. At one angle, you might not have seen the ship's name, but the name was visible at all times."

The US Navy's chief of information, Rear Adm. Charlie Brown, also tweeted Wednesday night that the name had been visible.

"The name of USS John S. McCain was not obscured during the POTUS visit to Yokosuka on Memorial Day," Brown said in a tweet. "The Navy is proud of that ship, its crew, its namesake and its heritage."

Trump first said Wednesday night on Twitter that he had not been made aware of any plans concerning the ship: "I was not informed about anything having to do with the Navy Ship USS John S. McCain during my recent visit to Japan. Nevertheless, @FLOTUS and I loved being with our great Military Men and Women - what a spectacular job they do!"

On Thursday morning, acting Secretary of Defense Patrick Shanahan told reporters, "in terms of ship movements, the only ships I've moved is the USS Abraham Lincoln," a reference to recent US military moves to pressure Iran.

"Furthermore, I would never dishonor the memory of a great American patriot like Senator McCain. I also think it's important -- I'd never disrespect the young men and women that crew that ship. I've asked my chief of staff to look into the matter," said Shanahan, adding that he first learned of the incident Thursday morning.

Trump and McCain, who was the 2008 Republican presidential nominee, were frequently at odds before and during Trump's presidency. In 2015, Trump attacked McCain -- who had been a prisoner of war in Vietnam -- as "not a war hero" and again criticized the senator from Arizona after he died of brain cancer last August.

The barbs against McCain from the President did not stop after his death. Seven months after McCain passed away, Trump mocked him on Twitter inaccurately for coming "last in his class," and rebuked McCain for voting against a GOP bid to repeal Obamacare. "I was never a fan of John McCain and I never will be," Trump said at the time.

McCain's daughter Meghan McCain, reacting on Twitter Wednesday to the Journal's report, called Trump "a child who will always be deeply threatened by the greatness of my dads incredible life."

"There is a lot of criticism of how much I speak about my dad, but nine months since he passed, Trump won't let him RIP. So I have to stand up for him. It makes my grief unbearable," she wrote.

Former Defense Secretary William Cohen, a friend of McCain's, said Thursday on CNN's "The Situation Room" that while he gave Trump the "benefit of the doubt" that he did not know about the incident, he also thought the President was responsible for the climate in which it had occurred. Cohen, who served under President Bill Clinton, went on to defend McCain's legacy in the face of Trump's continued criticism.

"There's no question he was a hero of tremendous proportions," Cohen said. "And also the fact that John was a hero on a global scale. Whether you were talking about Japan or China or any other place, they looked to him as a man of great courage who would endure tremendous personal suffering and still not yield his place in going back to the United States."

During his time as a Vietnam POW, McCain refused a preferential release offer, made because his father was an admiral. He turned down the offer until his comrades could also go home.