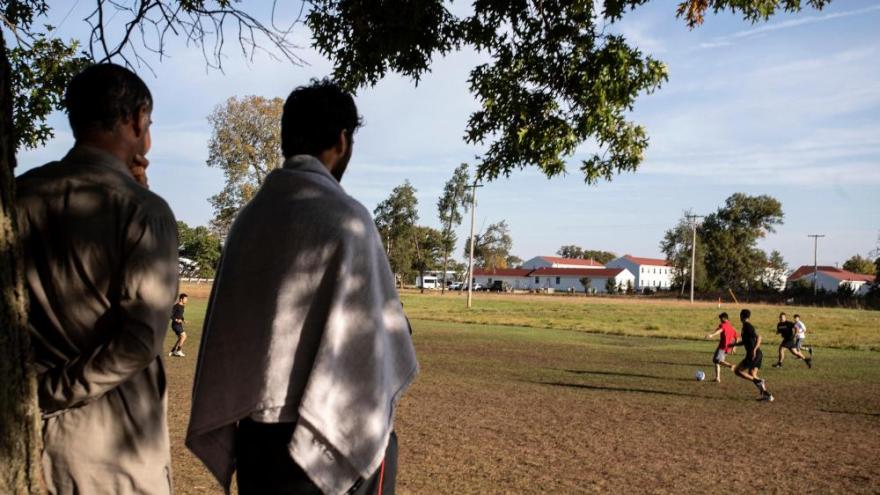 Members of the U.S. military and Afghan refugees play soccer at Ft. McCoy US Army base on September 30 in Ft. McCoy, Wisconsin.

(CNN) -- The Biden administration is taking an unprecedented step to resettle the 55,600 Afghan evacuees from the US military bases where they've been living for weeks and into permanent homes, an official leading the effort told CNN.

The move marks the biggest change to the resettlement program since 1980, when the modern-day infrastructure for admitting refugees was put in place.

The resettlement challenge has dogged the administration since the frenzied evacuation from Afghanistan in August: resettling tens of thousands of people -- many of whom worked with or on behalf of the US -- within only weeks or months. The abrupt arrival of evacuees strained already-overwhelmed refugee resettlement agencies and left both the administration and organizations scrambling to find permanent homes in a housing crunch.

Now, to increase options to evacuees, the Biden administration is launching a program that would allow veterans with ties to Afghans, as well as others, the opportunity to bring them to their cities and serve as a support network as they get their lives started in the US, former Delaware Gov. Jack Markell told CNN.

"This is just an amazing opportunity to, frankly, do what our veterans have been asking us to do, which is provide a safe and dignified welcome to Afghans who served by our side in Afghanistan, and who now want to build their own lives here," said Markell, a Democrat and the temporary point person overseeing the Afghan evacuee resettlement effort for the administration.

Veterans, who have worked closely with Afghans who fled Afghanistan fearing reprisals from the Taliban for their work with the US, underscored the significance of pairing evacuees with people with shared lived experiences.

"We've been there. We understand what it's like to come from that experience and then find yourself dropped into this environment and how quite frankly overwhelming that it can be," said Matt Zeller, a security fellow at the Truman National Security Project, who added he's willing to open up his home to Afghans and their families.

Zeller is clamoring to meet an Afghan interpreter who he spoke with prior to the fall of Kabul and helped evacuate. "He calls me his guardian angel," Zeller said, adding he'd be willing to house the interpreter and his family. "I just want to hug him."

"The make-or-break factor between endemic poverty and making it in America is whether or not you have a veteran assisting you. And the earlier that occurs in the process, the more successful," Zeller, who served in Afghanistan, said.

Refugee agencies have previously discussed the idea of private sponsorship. The way the system currently works is an agency usually must have a local office -- or a network of community groups -- that will acquaint refugees with their new surroundings and help them get set up with housing and a job, among other services.

But after four years of historic low arrivals under the Trump administration, agencies had to close some of their offices around the country, limiting where refugees can be relocated -- a significant hurdle at a time when housing options are already hard to come by.

"We just didn't have the capacity after the beating we took under the Trump administration," said Mark Hetfield, the president and CEO of HIAS, a refugee resettlement agency. "Necessity is the mother of invention. This is the outcome of that."

A sponsorship-like system is intended to allow greater flexibility and open more locations for refugees to go. But it's dependent on people signing up and having the resources to support Afghans and their families.

The administration is working with Community Sponsorship Hub, a sponsored project of Rockefeller Philanthropy Advisors, Inc.

"It's providing this opportunity for communities that said they want to stand up, to stand up. That's the point. It's to maximize this outpouring of desire to welcome," said Danielle Grigsby, co-founder and director of external affairs at Community Sponsorship Hub. The hub will be largely responsible for the process, but other organizations will also assist including Airbnb.org, the International Rescue Committee, Integrated Refugee & Immigrant Services, RefugeePoint and Welcome.US.

The administration has already made some changes to solve for location constraints, such as allowing resettlement groups to place Afghans and their families outside the usual 100-mile radius limit from a local resettlement office.

The new initiative, though, would allow groups of five individuals over the age of 18 to apply as a so-called sponsor circle. As part of that application, they will go through background checks, commit to fundraising in order to financially support evacuees for up to 90 days, complete training, and develop a plan for the family, according to Grigsby.

If approved, that group will then be responsible for securing housing, supporting refugees accessing benefits that are available to them through the federal government, like medical services, and help enroll children in school, among other responsibilities. Sponsors can house Afghans in their homes, though it's encouraged that be for a temporary period unless it's a relative, Grigsby said.

"The housing issue is a challenging one for sure. Every American knows that housing is expensive and in short supply," Markell said.

"We have been very fortunate that a number of organizations, like Airbnb, have stepped up. And these sponsorship circles, because they're so rooted in their communities, will have the advantage of knowing those communities and finding additional housing opportunities," he added.

Groups will also be responsible for raising money to get refugees set up in their community. Usually, the federal government provides a one-time payment of $2,275 for each Afghan an agency serves, of which $1,225 is available for agencies to use for direct assistance like housing and basic necessities, including furniture and silverware. The other bulk of the money is used to cover administrative costs. Afghans will still be eligible for federal benefits. The sponsor circles will have to raise that same amount -- $2,275 -- privately.

Markell declined to say when the military bases will be cleared. But veterans are getting anxious to see Afghans move on to their next location.

Christina Tamayo, a representative of Allied Airlift 21, which helped evacuate Afghans from Afghanistan, told CNN she's prepared to help an Afghan and his family who are staying at a base in New Mexico.

"I'm very well qualified to help them because I was so deeply involved with the coordination of other resources groups and I have a really great network," Tamayo, who served with the US Army and is based in Houston, told CNN.

Kristen Babicki, an Air Force veteran who served in Afghanistan in 2009, recently reunited with her interpreter at a military base in Virginia after his frightening final days in Kabul. Like many who worked with or on behalf of the US government, the Taliban's return to power put their lives at risk.

"The 15th he wrote me a really nice note," Babicki said, referring to August 15 when the evacuation was underway. "He basically said goodbye." Her interpreter and his family were ultimately able to evacuate and are now at Fort Pickett in Virginia, ready to relocate with relatives in Virginia.

It's not just veterans lining up to assist. Refugees with shared experiences are also coalescing to support Afghans once they come off the bases, including a group of Vietnamese Americans in Washington state.

The last time the US resettled anywhere close to this number of evacuees within such a short period was after the US troop withdrawal from Vietnam, when more than 130,000 people came to the US over an eight-month period.

Nguyen and four others have already set up a group and are prepared to sponsor Afghans in Washington state.