White House leaning toward canceling $10,000 in student loan debt for borrowers who make less than $125,000 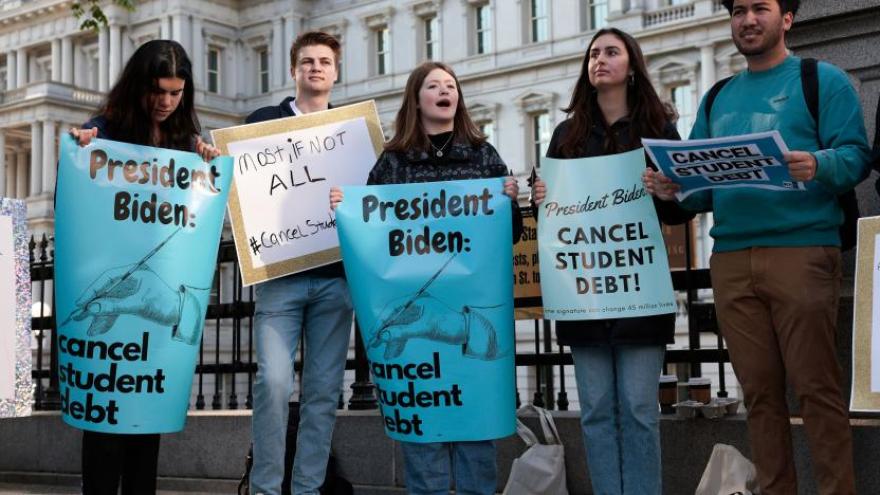 Activists hold signs as they attend a Student Loan Forgiveness rally near the White House on April 27. The White House is leaning toward canceling $10,000 in student loan debt for borrowers who make less than $125,000.

(CNN) -- White House officials have been weighing -- and leaning toward -- the cancellation of up to $10,000 in student loan debt per borrower tied to an income threshold, CNN has learned.

According to multiple sources familiar with the discussions, the plan is designed to offer the forgiveness to individuals who earn less than $125,000 per year.

In addition to that baseline of student loan debt forgiveness for individuals who fall under a certain income level, administration officials have also recently discussed the possibility of additional forgiveness for specific subsets of the population, according to sources familiar with internal discussions in the administration.

The announcement could come as early as Wednesday, but it is not clear that a final decision on the details of the announcement -- as well as the timing -- has been made, and there could always be eleventh hour changes. The White House is also expected to address in the coming days whether to extend again the current pause on federal student loan payments, which is set to expire on August 31.

Payments have not been required on most federal student loans since March 2020, when the Covid-19 pandemic hit the US, greatly affecting the economy. Biden has extended the pause four times, most recently in April, arguing that it was necessary to allow federal student loan borrowers to get back on their feet.

In recent days, White House officials have been in communication with lawmakers to discuss their thinking on student loan debt forgiveness, ahead of the current pause on payments expiring. Last week, for example, Senate Majority Leader Chuck Schumer, Democratic Sen. Elizabeth Warren of Massachusetts, and Democratic Sen. Raphael Warnock of Georgia, had a discussion with senior White House officials, sources said.

The White House has suggested in the past that Biden was considering canceling $10,000 per borrower but excluding those who earn more than $125,000 a year.

Setting an income cap, which has been the subject of intense debate both inside and outside the administration, was also crafted as a buffer against criticism that the forgiveness would benefit those with the means to manage their debt payments.

Education Secretary Miguel Cardona said Sunday that Americans can expect a decision from the administration on student loans in the "next week or so." With less than two weeks to go, Americans have been left guessing for weeks whether Biden will extend the current moratorium or, perhaps, forgive some of their debt.

"We've been talking daily about this, and I can tell you the American people will hear within the next week or so from the President and the Department of Education on what we're going to be doing around that," Cardona told NBC's Chuck Todd on "Meet the Press."

He did not elaborate on the details, saying he would not get ahead of the announcement.

Some Democratic lawmakers and advocates have been urging Biden to broadly cancel up to $50,000 in student loan debt per borrower, but the President has consistently pushed back on canceling that much.

Biden has canceled more student loan debt than any other president, with his administration authorizing the cancellation of nearly $32 billion in loans largely for borrowers who were defrauded by their for-profit colleges and for permanently disabled borrowers.