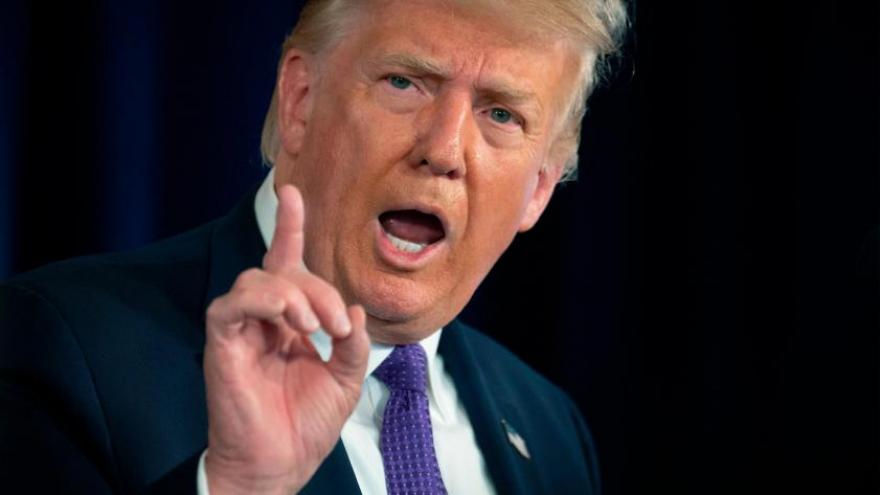 The White House issued a veto threat for House Democrats' proposed bill that would provide $25 billion to the United States Postal Service.

(CNN) -- The White House issued a veto threat on Friday for House Democrats' proposed bill that would provide $25 billion to the US Postal Service.

The bill is expected to pass on Saturday largely along party lines, with Democrats supporting it. House GOP leaders are pushing their members to oppose the legislation, and it is not likely to be considered in the Republican-controlled Senate.

Saturday's vote, which interrupts the August recess, comes as Democrats warn that President Donald Trump is trying to squeeze the USPS to suppress the vote in November's election.

Trump admitted last week that he opposes much-needed funding for the USPS because he doesn't want to see it used for mail-in voting this November. The President has long made unfounded assertions that mail-in voting is prone to fraud, while Democrats have praised the practice as safe and secure, using their national convention this week to urge voters to request absentee ballots.

Postal workers across the country have sounded alarms over changes that Postmaster General Louis DeJoy, a Trump fundraiser, has made since taking over in June that they said were causing massive delivery delays. Lawmakers on both sides of the aisle have worried about the impact such lags could have on the upcoming election, which is expected to see a surge in mail-in voting because of the coronavirus pandemic.

The White House criticized the Democrats' bill for spending funds "arbitrarily" without tying those funds to coronavirus relief or the election in a statement of administration policy released Friday evening.

"The Administration strongly opposes passage of H.R. 8015. Instead of reforming the United States Postal Service (USPS) to ensure its continued viability in the modern economy, H.R. 8015 would arbitrarily give USPS $25 billion in 'emergency' taxpayer funding, without linking that funding to either the COVID-19 pandemic or the upcoming election," the statement released by the Office of Management and Budget reads in part.

The statement also accuses Democrats of trying to "exploit the COVID-19 pandemic as a pretext for placing counterproductive restrictions on USPS's already limited operational flexibilities."

The statement also claims that the "USPS has not changed its service standards this year," but as CNN has reported, internal USPS documents clearly show that USPS planned some policy changes that could have resulted in longer delivery times for ballots, though that policy has since been reversed.

During a high-profile Senate hearing Friday, DeJoy acknowledged that there have been some delays but defended implemented changes by arguing they will save money and improve service.

"We had some delays in the mail," DeJoy said, adding, "The change that I made was one to our schedule, one to our transportation schedule. I believe we will get at least a billion dollars of savings out of that moving forward, and this is the key connectivity to improving our service."

Democrats have argued there is not sufficient transparency around Postal Service operational changes, and DeJoy pushed back when pressed to provide transcripts of nonpublic meetings from this year.

He is scheduled to testify before the House Oversight Committee on Monday.