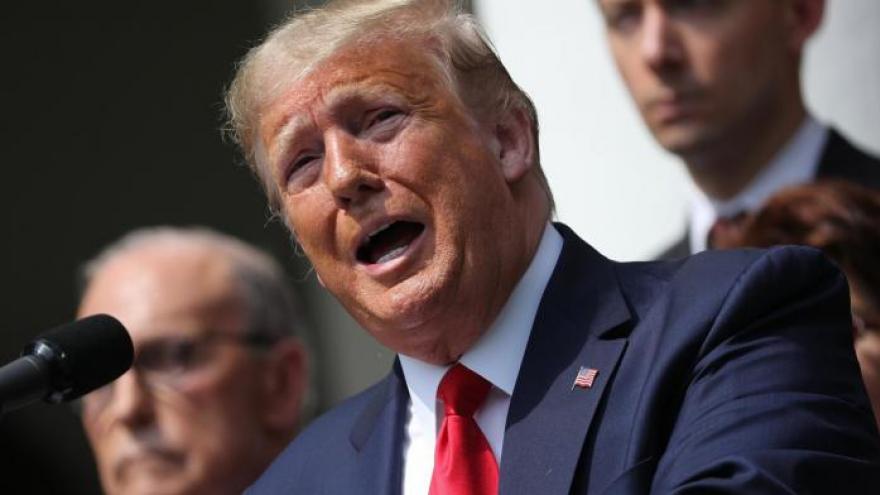 White House officials are rumored to be deliberating a plan for President Donald Trump to address the nation on issues related to race and national unity.

(CNN) -- After a weekend of massive peaceful protests around the country, White House officials are currently deliberating a plan for President Donald Trump to address the nation this week on issues related to race and national unity, as Housing and Urban Development Secretary Ben Carson hinted in an interview with CNN on Sunday and a senior administration official said was under serious consideration.

Many allies of the President spent the last week distraught as they watched Trump fumble his response to the police killing of George Floyd, only to follow his perceived silence on the resulting racial tensions with a federal law enforcement crackdown on the protesters near his fortified doorstep.

Aides and allies were not comforted by the backlash over his decision to have federal officers aggressively clear Lafayette Park in front of the White House to facilitate a widely-panned attempt at a photo-op in front of St. John's Church. And the rest of the week continued on a downward spiral, as protests across the country grew and Trump faced an onslaught of well-known conservatives, generals and former Trump administration officials who excoriated his response and called for new leadership come November.

Carson suggested during an interview with CNN's Jake Tapper on "State of the Union" that the President this week would further address Floyd's killing and the tensions it exposed.

"I believe you're going to be hearing from the President this week on this topic in some detail. And I would ask you maybe to reserve judgment until after that time," Carson said.

Despite the belief by many aides and allies that this was one of the worst weeks of Trump's tenure, a source close to the White House said there has been a more optimistic shift in the last two days.

The shocking job numbers released Friday showing a better-than-expected picture kicked off the weekend, and while the White House has struggled to come up with any sort of consistent messaging in response to Floyd's death while in police custody, and the movement it touched off, officials are starting the week with new resolve and new talking points.

Allies and advisers believe that the lack of violence over the weekend allows the President to double down on his "law and order" message, painting the relative calm as a direct result of his push for "domination" in the streets, a source close to the White House told CNN.

Additionally, some in and around the White House now believe they were given a gift by protesters over the weekend, as chants of "defund the police" permeated the streets. This source said there are plans to link Democrats to this effort in the hope of siphoning off more moderate voters who may view it as extreme.

Trump spent Sunday morning linking former Vice President Joe Biden to the "defund the police" movement, and his campaign has already begun to hammer Biden and other Democrats over what the President's team has tried to frame as their tolerance of destruction and lawlessness.

"Defund the Police" is the push by some activists for a sizable chunk of a city's police budget to instead be invested in communities, especially marginalized ones where much of the policing occurs.