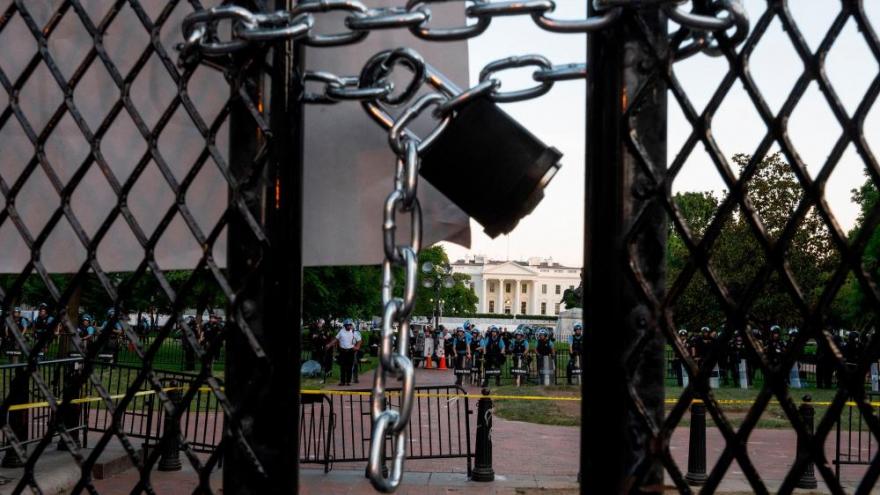 Workers erected a perimeter of tall metal fencing around the White House complex ahead of continued protests.

(CNN) -- The People's House continued to be fortified from the public Thursday, as workers erected a perimeter of tall metal fencing around the White House complex.

After law enforcement forcefully dispersed peaceful protesters so President Donald Trump could participate in a photo opportunity with a Bible outside St. John's Episcopal Church, workers were seen constructing fencing around Lafayette Park and at the intersection of 17th Street and Pennsylvania Avenue beside the Eisenhower Executive Office Building late Monday evening.

And on Thursday, construction of additional fencing along the White House complex began before dawn -- perhaps a sign of security concerns ahead of expected continuing protests this weekend.

By Thursday afternoon, the fencing extended down 17th Street from Pennsylvania Avenue to Constitution Avenue.

The 1600 block of Pennsylvania Avenue closed to vehicular traffic in 1995 shortly after the Oklahoma City Bombing, but it is normally open to pedestrians, a symbol of freedom in the nation's capital. The Secret Service does close the area frequently -- but temporarily -- for a number of routine security reasons, including suspicious packages and presidential movements.

The fence is expected to stay up through next Wednesday, the Secret Service said, citing "necessary security measures."

"These closures are in an effort to maintain the necessary security measures surrounding the White House complex, while also allowing for peaceful demonstration," a US Secret Service spokesperson said in a statement.

Last Friday and over the weekend, protests near the White House became violent at times, with looting and fires nearby, including at St. John's church. Trump was rushed to a bunker for nearly an hour amid intense protests on Friday evening, multiple sources familiar with the matter told CNN. Trump claimed Wednesday it was an "inspection," rather than a retreat for his own safety.

Protests in the area were largely peaceful Tuesday and Wednesday evenings.

Washington Mayor Muriel Bowser said Thursday she is concerned that the fencing may not be temporary, and that "it's a sad commentary that the (White) House and its inhabitants have to be walled off."

"I'm one of those people who grew up in Washington, DC, and has been very accustomed to being able to have access to all of our federal facilities, going up on the Capitol grounds ... from being able to walk all around the Supreme Court, to walk in front of the White House, on both sides, and now all of that is under threat," Bowser said during a news conference.

Jonathan Wackrow, a former Secret Service agent and CNN law enforcement contributor, said the Secret Service is preparing for the possibility that protests that could again become tense amid additional events over the next week, including funeral and memorial services honoring George Floyd in Minneapolis, Houston and North Carolina.

"The White House has been a target of protest activity and tangential agitators," Wackrow said, noting that there were still some pockets of escalation on Tuesday and Wednesday.

In constructing additional fencing, the Secret Service, he said, "is having situational awareness of what the future is going to potentially bring," as well as looking "at some of the gaps that are potentially present" on the grounds.

A truck containing stacked metal fencing was parked on 17th Street before 6 a.m. Thursday, workers installing the fence beside the Eisenhower Executive Office Building. Later in the morning, the fencing extended well past the Eisenhower Executive Office Building toward Constitution Avenue. And existing fencing constructed earlier this week at the intersection of 17th Street and Pennsylvania Avenue was reinforced with concrete barriers behind the fence, which, Wackrow said, would prevent vehicles from approaching crowds.

It's not the first time fencing of this magnitude has gone up around the White House. During the inaugural parade every four years, fencing extends from the Capitol to the White House.

And the Secret Service, Wackrow said, has significant experience with protests -- there's a protest of some form or fashion at the White House 365 days a year.

However, he added: "The tenor of these protests has been different from what we've seen in the past."

The combination of the killing of George Floyd and systematic racism and injustice in the US, paired with consistent good weather in Washington, and the fact that more than 40 million Americans are out of work as a result of the coronavirus pandemic, is heightening the protest activity.

This story has been updated with a statement from a Secret Service spokesperson.