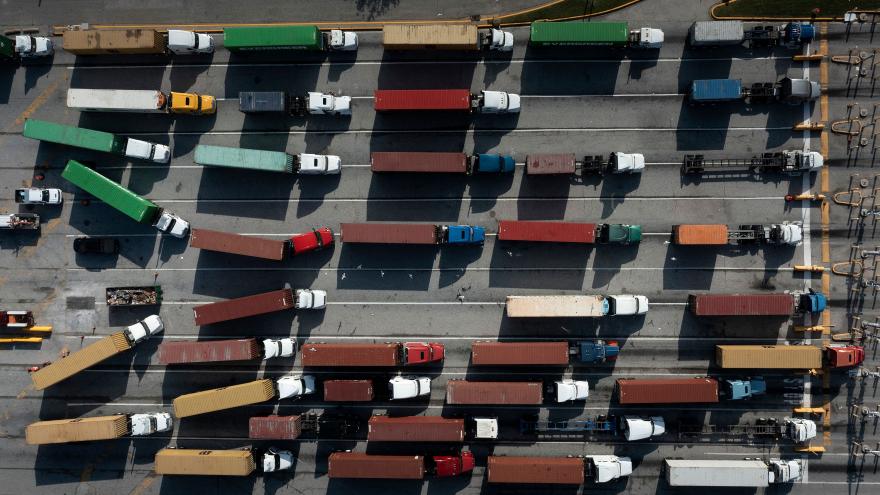 (CNN) -- Facing a mounting supply chain crisis, the White House is exploring whether to deploy the National Guard to ease bottlenecks, though that option is viewed as unlikely, a person familiar with the matter told CNN.

Business groups have urged the Biden administration to consider out-of-the-box ideas to address the supply chain mess, which is snarling shipments, raising costs and leaving some store shelves empty.

Asked if the White House would consider bringing in the National Guard or Navy to help unload cargo stacked up at ports or drive trucks, White House Press Secretary Jen Psaki said Tuesday, "I'm not here to take options off the table."

A White House official confirmed to CNN that the administration continues to assess all potential options to address the supply chain stress -- including deploying the National Guard.

However, tapping the National Guard is not imminent and while the administration is not taking anything off the table, it is unlikely to move forward with this, a person familiar with the matter told CNN.

The Washington Post previously reported news of the White House exploring the use of the National Guard.

Transportation Secretary Pete Buttigieg over the weekend did not rule out the possibility of either easing tariffs or using the National Guard. "I think that any opportunity to make a difference will be looked at," Buttigieg told NBC's Chuck Todd.

The fact that this is even being explored underscores the severity of the supply chain crisis and hints at concerns about elevated inflation, which is denting Americans' views of the economy.

During a virtual meeting with the White House last week, Consumer Brands Association Geoff Freeman urged officials to consider new approaches, including the "targeted use" of the National Guard, Freeman previously told CNN.

Freeman, whose trade group represents Coca-Cola, Kellogg and other brands, suggested this could be a way to address bottlenecks wherever they form, including removing cargo from ships or getting cargo out of shipyards.

It's a step that has been taken previously during Covid, including to distribute vaccines, help hospitals and drive school vans. In the UK, the army was deployed to deliver fuel to end days of shortages.

"Everyone I talk to within the consumer packaged goods industry believes the strain is only going to become greater in the months ahead," Freeman said.