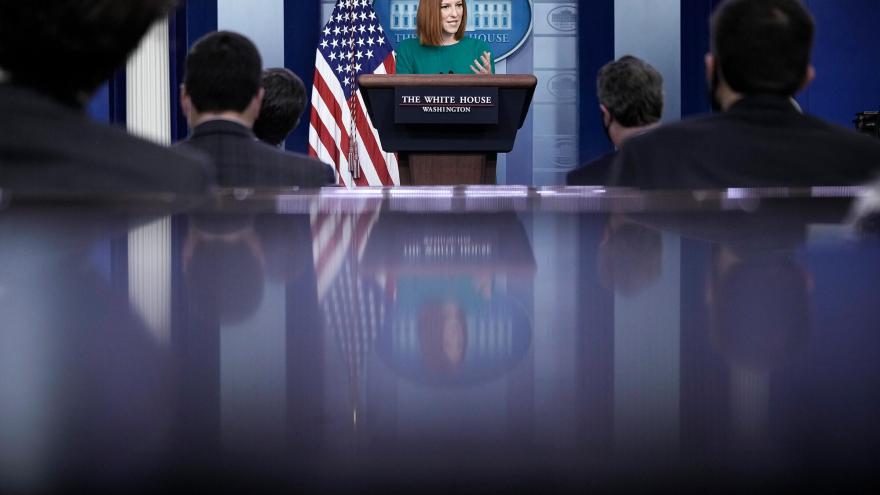 White House officials on Friday presented a counteroffer to Republican lawmakers on their infrastructure and jobs package that reduced the size of the proposal from $2.25 trillion to $1.7 trillion, according to White House press secretary Jen Psaki. Psaki is shown speaking during the daily press briefing the White House on April 27, 2021 in Washington, DC.

(CNN) -- White House officials on Friday presented a counteroffer to Republican lawmakers on their infrastructure and jobs package that reduced the size of the proposal from $2.25 trillion to $1.7 trillion.

The new offer is a decrease of $550 billion on the top line, but it still leaves the two sides far apart as the window for a potential deal comes perilously close to closing.

The proposal, obtained by CNN, lays out four areas the White House views as concessions to Republicans, who have put a $568 billion proposal on the table. The White House offer includes matching what Republican senators have proposed as the spending level for broadband, $65 billion, and reducing Biden's proposed spending level on roads, bridges and major projects by $39 billion. It also takes spending on manufacturing, research and development and supply chain out of the talks.

The document acknowledges the counter-proposal "still leaves us far apart."

"However, in service of trying to advance these negotiations, the President has asked us to respond with changes to his American Jobs Plan, in hopes that these changes will spur further bipartisan cooperation and progress," the document says.

White House officials view their latest offer as the next step in the ongoing talks -- one that shows Biden is willing to cut a chunk of his original proposal, but that also makes clear Republicans must be willing to significantly increase the scope and scale of any counteroffer for serious talks to continue. While Republicans have opened the door to increasing the overall scale of their plan, they have sharply objected to the levels Democrats have put on the table, as well as the expansive definition the White House has leaned on for an "infrastructure" proposal.

However, Republicans objected to the offer.

"During today's call, the White House came back with a counteroffer that is well above the range of what can pass Congress with bipartisan support," said Kelley Moore, communications director for Sen. Shelley Moore Capito of West Virginia.

"There continue to be vast differences between the White House and Senate Republicans when it comes to the definition of infrastructure, the magnitude of proposed spending, and how to pay for it. Based on today's meeting, the groups seem further apart after two meetings with White House staff than they were after one meeting with President Biden."

The White House on Saturday said Biden's new offer was made "in the interest of finding bipartisan common ground" and included "cuts to his original proposal and a way to pay for it."

"The ball is now in their court to respond with a good faith counter-offer," deputy press secretary Andrew Bates said in a statement to CNN.

"This proposal exhibits a willingness to come down in size, giving on some areas that are important to the President -- otherwise they wouldn't have been in the proposal -- while also staying firm in areas that are most vital to rebuilding our infrastructure and industries of the future, making our workforce and our country more competitive with China," Psaki told reporters.

The meeting and counter proposal mark a key moment in the negotiations, which both sides have said were viewed in good faith, even as progress has lagged. The Republican senators, led by Capito, met in the Oval Office with Biden last week and have continued discussions with White House officials at the staff level for several weeks.

The White House has said it wants to see progress toward an agreement by the end of next week, though they haven't specified what precisely that would entail. It's clear, however, that any such progress hasn't been made to this point, people on both sides of the talks say, and with the deadline approaching, the proposal comes at a crucial, potentially make-or-break moment in the negotiations. The plan was the first of a two-part proposal to help the nation's economy recover from the coronavirus pandemic. The second part is the $1.8 trillion American Families Plan.

Each side frustrated with the other

White House officials have been frustrated that the GOP negotiators didn't move off their topline spending levels in a meeting to discuss the dueling proposals earlier this week and see their offer as a way to try and move Republicans to do just that in continued talks.

Republicans, however, were discouraged by what White House officials put on the table Friday, according to two GOP aides, and viewed the proposal as far out of the scope of what they are willing to consider. The reaction from Hill Republicans is full-on frustration, with lawmakers viewing the proposal as not serious given where the talks currently stand, according to one GOP aide.

But the White House counterproposal represents a key signal from Biden that he isn't willing to jettison key elements of his infrastructure and jobs plan -- something Republicans have viewed as essential to any deal.

Biden has suggested he is open to a corporate income tax rate between 25% and 28% to pay for his sweeping proposal. The corporate rate, which is currently 21%, had been as high as 35% before former President Donald Trump and congressional Republicans cut taxes in 2017.

But the tax hike, which would not affect those making $400,000 or less, has been met by fierce opposition by Republican lawmakers.

Senate Minority Leader Mitch McConnell and House Minority Leader Kevin McCarthy told reporters earlier this month that they told the President they're not willing to budge on the 2017 tax cuts signed into law by Trump, calling the issue the GOP's "red line."

Psaki said Friday the counterproposal reflects the White House's view that the Republican offer excluded key components that they consider critical to rebuilding the nation's infrastructure.

"The counteroffer also reflects our view that the Republican offer excludes entirely some proposals that are key to our competitiveness, key to investments in clean energy and industries of the future and rebuilding our workforce, including critical investments in our power sector, building and construction, workforce training, veterans hospital construction, and the care economy," White House press secretary Jen Psaki told reporters Friday.

Psaki continued: "So we push for increased funding levels for critical transportation infrastructure like rail, especially considering China's level of investment in such projects, as well as the elimination of lead pipes that poisoned drinking water and resilience projects as extreme weather events, as we've seen around the country, continue to become more common as a result of climate change."

The counter-offer makes clear Biden's decision to take a key element of his proposal out of the talks -- the research and development, manufacturing and supply chain piece -- meant that Republicans needed to open the door to the $400 billion in home care and disability services Biden included in his initial proposal.

"Because the President is taking off the table for purposes of these negotiations a significant category of investment that you have argued is not infrastructure, he believes fairness dictates that you consider investments in areas that he believes are vital but are not currently included in your Roadmap," the document says.

It also makes clear any Republican counter effort should include tangible increases in spending levels for areas Republicans do agree should be included in the proposal, including money for transit, rail and electric vehicles and the elimination of lead pipes.

This story has been updated with additional reporting Saturday.