Top health officials agree Americans who traveled for Thanksgiving should get tested. But this is where they differ 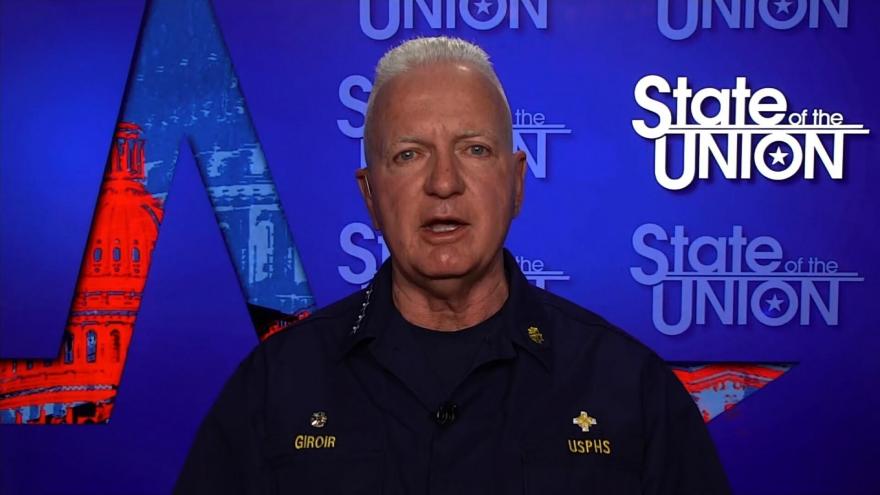 Adm. Brett Giroir joins CNN's Dana Bash to discuss his concerns about the potential spread of coronavirus as Americans return from Thanksgiving travel.

(CNN) -- Top health officials on Sunday called on Americans to get tested for coronavirus after Thanksgiving travel as an important measure to help mitigate the virus' spread amid a surge in US cases.

But when it came to whether individuals should quarantine or isolate, and for how long, responses from the nation's leading experts differed.

Assistant Secretary for Health Adm. Brett Giroir told CNN's Dana Bash on "State of the Union" that it is "not recommended to have a quarantine after travel unless you've had a direct exposure to a person with Covid for 15 minutes in close contact."

"Right now, as people go back we want to urge them, if they've been in situations outside of the family setting in which they really don't know the level of exposure, to be really careful when you either return from the place that you went or other people come back into your house," Fauci told Martha Raddatz on ABC's "This Week." "That you really gotta understand the importance of trying to prevent further spread and further surge. That may be, when you go back to where you've came from, if it's possible to quarantine yourself for a period of time or even get tested to make sure that you are not bringing infection back to another place, be it another home or another family."

And US Surgeon General Jerome Adams said those who gathered for Thanksgiving can still isolate and get tested.

White House coronavirus task force coordinator Dr. Deborah Birx agreed that families who gathered for Thanksgiving should get tested for the virus, and people over age 65 should get tested immediately if they develop any symptoms.

"If you're young and you gathered, you need to be tested about five to 10 days later," Birx told Margaret Brennan Sunday on CBS' "Face the Nation." "You need to assume that you're infected and not go near your grandparents and aunts and others without a mask."

The US Centers for Disease Control and Prevention recommends that a person quarantine after being in close contact, or "6 feet of someone who has COVID-19 for a total of 15 minutes or more." The CDC also recommends Americans take precautions such as mask wearing inside the home, hand washing, and social distancing "regardless of where you traveled or what you did during your trip" to protect others from getting the virus. The agency also advises Americans to follow guidelines in states that require travelers to quarantine or get tested.

Giroir on Sunday said Americans who traveled during the Thanksgiving holiday are at an increased risk of contracting the virus, meaning they should get tested, wear masks and avoid big groups.

"Make really sure you adhere 100% to mask wearing to avoid crowds because you could inadvertently have gotten Covid and spread it, so just be careful during the week after your travel because you are at increased risk," Giroir told Bash. "Just remember you've had an increased risk of being exposed, so you should decrease unnecessary activities for about a week, and if you can get tested in three or five days that's also a very good idea."

The guidance following Thanksgiving comes after health experts warned Americans about traveling to see family and to avoid large gatherings during the holidays as the number of coronavirus cases surges across the US. More than 91,000 Americans were hospitalized with the virus on Saturday, the highest daily number yet in hospitalizations due to the virus.

'We are at a risky time'

Giroir said Sunday he is concerned about a possible surge in cases and hospitalizations as holiday travel increases.

On a separate program, Fauci said Sunday that he was also concerned about hospitalizations. He said people not adhering to earlier guidance from the CDC and other health experts about avoiding Thanksgiving gatherings could lead to another surge in cases.

"But, you know people are not always going to do that so what we expect unfortunately, as we go to the next couple of weeks into December, that we might see a surge superimposed upon that surge that we're already in," Fauci said during an interview on NBC's "Meet The Press."

He also said "it is not too late at all for us to do something about this" and for Americans to "be careful" when traveling back home.

Trump painted a far rosier picture of the virus in the US in his first television interview since the election.

"We're doing better than the rest of the world," Trump told Fox News anchor Maria Bartiromo on Sunday, despite the high number of infections the US is experiencing.