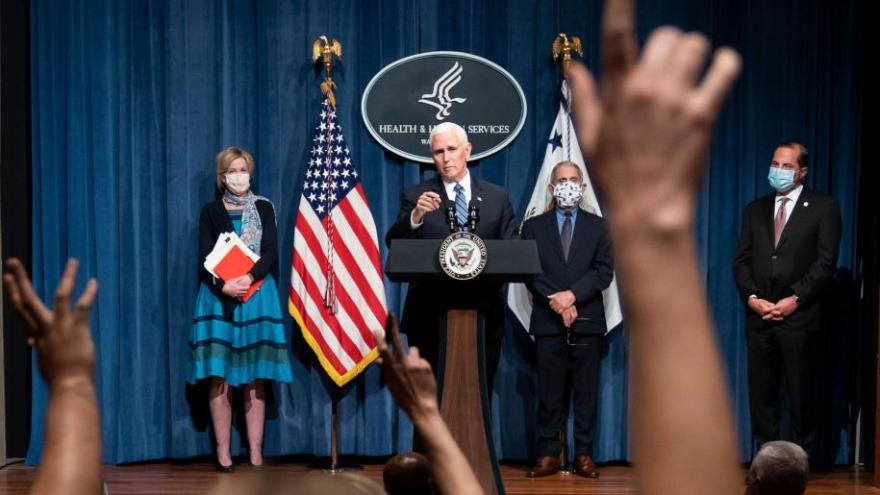 (CNN) -- The White House coronavirus task force has informed states that it will no longer proactively send its weekly state reports with tailored data and recommendations, according to multiple state officials. Instead, states will need to request the reports each week.

This new policy, which one official said came via email, is a departure from the previous process and removes a layer of transparency and vital information amid a raging pandemic.

The task force has been sending the reports to key state and public health officials weekly, usually on Mondays or Tuesdays, since June, when a second wave of Covid-19 infections began to spread across the country. The White House has declined to share the reports with press, but CNN has obtained hundreds of reports since then, and some weeks' reports have also been published by the House Select Subcommittee on the Coronavirus Crisis.

Over the past several months, the language in the reports and each states' respective recommendations have become increasingly dire.

The White House did not immediately respond to CNN's request for information on why the procedure for states has changed.

One state official told CNN they were informed of the new policy in an email.

Another state official told CNN that the policy went into effect last week, but their state was only informed of the new process this Tuesday. An email sent to the state from the Department of Health and Human Services said the reports would be "available by request" moving forward, and that states could put in the weekly request to the White House via email. There was no justification given for the change in policy.

Multiple state officials learned of the change via media inquiries.

"We became aware of it from a media inquiry, and then we confirmed the new policy with Region X HHS, who were also unaware until they inquired about it. In truth, all of our inboxes are a mess, so we could have missed an email, but we were not aware of the change initially," one state health official said.

Warnings of a post-holiday surge

The state reports for the week of December 20 that CNN has obtained so far provide stark data on the current state of the pandemic.

The reports also provided the urgent recommendation that Americans take mitigation steps seriously to "preserve" the US hospital system.

"Preventing a post-Christmas/Kwanzaa surge is critical through clear and continuous messaging: 'To preserve our hospital system for you, we need you to wear masks, physically distance, wash hands, and avoid crowds and social gatherings beyond your immediate family,'" the reports said.

The reports have often been at odds with President Donald Trump's own words and the administration's actions -- warning against in-person gatherings, for example, while the White House hosted a bevy of indoor holiday parties where many attendees did not wear masks.

Tennessee is the state with the most new Covid-19 cases per 100,000 population in the December 20 reports, followed by California, Arizona, Rhode Island, Indiana, Nevada, Utah, Oklahoma, Ohio, and Delaware in the top ten.

Oklahoma is the state with the highest test positivity rate, at over 20.1%, this week, followed by Nevada, Tennessee, Alabama, Idaho, Arizona, Virginia, Indiana, Nebraska, and Missouri in the top ten.

Arkansas has the highest Covid-19-related hospital admissions per 100 inpatient beds, followed by Arizona, Maryland, Kentucky, Oklahoma, California, Nevada, Pennsylvania, Ohio, and the District of Columbia in the top ten.