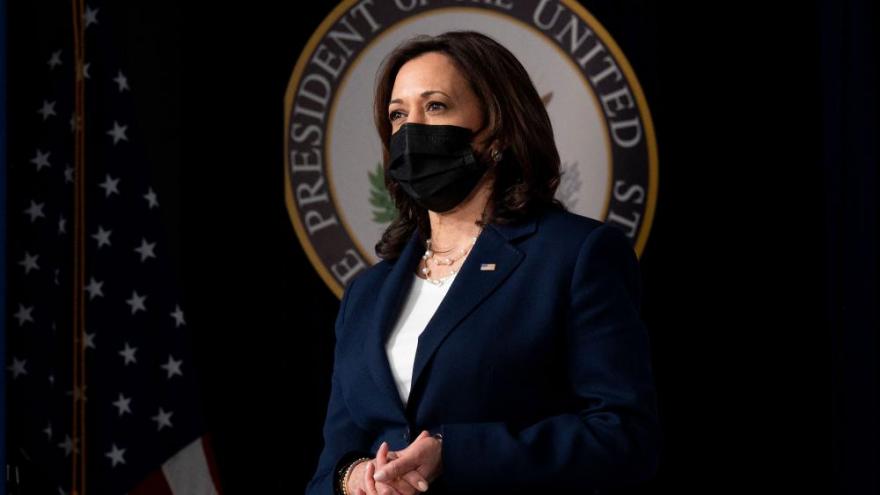 The Biden administration is considering pressing Guatemala to address governance issues in the country, highlighting just one of the delicate negotiations Vice President Kamala Harris is expected to lead.

(CNN) -- The Biden administration is considering pressing Guatemala to address governance issues in the country, ranging from investment to corruption, according to a source familiar with the deliberations at the White House, highlighting just one of the delicate negotiations Vice President Kamala Harris is expected to lead.

The State Department, in coordination with other federal agencies, is weighing a list of priorities to address irregular migration ahead of Harris' expected visit to Guatemala. Those priorities include legislative reform designed to improve conditions in the country, bolstering border security in the region and increasing Immigration and Customs Enforcement removal flights, the source said.

It's a high-stakes negotiation for Harris, who was tapped by President Joe Biden to lead Central American efforts against the backdrop of a growing number of migrants, many of whom are from the region, at the US southern border that have stretched the government's resources. Harris is not expected to travel to Mexico and Guatemala until mid-May at the earliest, according to a source familiar with the planning.

"We are making progress, but let's just be very clear, this is a complicated, complex issue that actually has been an issue for a long time and the work that we are putting into it now is work that is going to require a long-standing commitment beyond administrations," Harris said Monday after touring a manufacturing plant in North Carolina.

Since being tapped, Harris -- whose role is similar to the one Biden took under the Obama administration -- has spoken with the leaders of Guatemala and Mexico and recently met with experts on the region in a virtual roundtable.

Harris was in listening and learning mode during the roundtable, according to a source with knowledge of the meeting. She asked questions but didn't provide information on specific strategies, the source said, adding that she's "very focused" on dealing with root causes and looking at what would provide people in the region with "hope" in the short term.

Behind the scenes, the White House has tasked federal departments and agencies with collecting information on issues relating to the region -- from task forces to combat corruption and smuggling to humanitarian assistance to setting up migrant resource centers in the region, according to the source.

That also includes exploring the expansion of the Central American Minors program, which allows certain at-risk Central American youths to live in the US, and providing additional funding to support renewable energy investments, the source said.

A State Department spokesperson told CNN Tuesday, "We do not comment on internal deliberations."

CNN reached out to the White House for comment.

The litany of tasks provides a glimpse into the administration's whole-of-government approach to urgently tackling issues in the Central American region, as the US southern border faces an influx of migrants, many of whom are fleeing deteriorating conditions in the region.

The pandemic has taken a dramatic toll on Latin America, as Covid-19 cases and deaths have soared and economies once projected to grow have been decimated. The region was also hit with two devastating hurricanes. The decline in economic growth in 2020, according to the Congressional Research Service, is expected to worsen income inequality and poverty in the region.

Biden asked Congress for $4 billion over four years to target community training, climate mitigation, violence prevention and anti-gang programs with US partners in Mexico and Central America. The US Agency for International Development recently announced it was deploying a Disaster Assistance Response Team to respond to urgent humanitarian needs in Guatemala, Honduras and El Salvador.

Guatemalan President Alejandro Giammattei acknowledged the challenges the region faces, saying in an ABC interview that people "emigrate because they have no jobs, no home, no health, no education or security." He said he's spoken with Biden and Harris about what he calls "walls of prosperity" to stem the flow of migration.

The State Department's Northern Triangle special envoy, Ricardo Zúñiga, echoed the need to create jobs in Central America during a Council of the Americas event Monday.

"A starting point is to have the private sector help guide the strategy from the beginning in our response. We are going to address the acute factors. In other words, we're going to stress the humanitarian needs in the early going and that will be evident from where we're directing our assistance," he added, underscoring the need to also promote stronger regional efforts to control irregular migration.

"We are all very clear. The work that we have the potential to do in the Northern Triangle will not evidence itself overnight, by any stretch. We are looking at issues that have been a long time in the making," she said.

CNN previously reported that though aides were making efforts to define Harris' official task as leading the diplomatic outreach to Central American countries to address the root causes of migration, the vice president has already been tied to the border situation at large, as Republicans seek to conflate her more narrowly defined role with the entire border crisis.

On Monday, Harris didn't directly respond when asked if she was frustrated by Republicans efforts to tie her defined role with the larger situation at the border, instead touting steps she has taken on the diplomatic side of things, working with Cabinet officials and foreign governments.

Harris said she had spoken with Japanese Prime Minister Yoshihide Suga during his visit to the White House last week about what Japan can do to assist in the region, and is also working with the United Nations to work with allies to "renew a focus in that region."