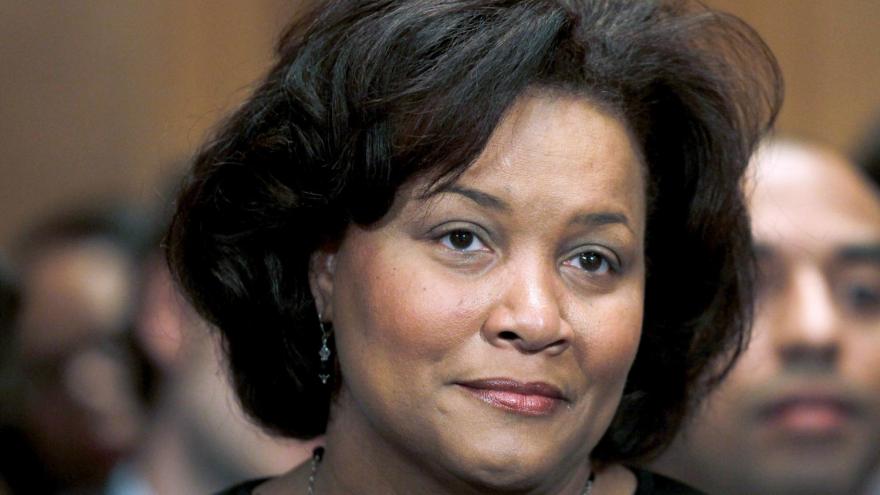 Judge J. Michelle Childs, who was nominated by President Barack Obama to the US District Court, listens during her nomination hearing before the Senate Judiciary Committee on Capitol Hill in Washington, April 16, 2010.

(CNN) -- South Carolina US District Judge J. Michelle Childs is among the people President Joe Biden is considering as a Supreme Court nominee, the White House confirmed Friday night, and as a result there will not be a hearing on her nomination to the Court of Appeals while she is under consideration for the high court.

The Senate Judiciary Committee earlier Friday said it was delaying Childs' nomination hearing because she is on a list of Biden's potential picks to serve on the Supreme Court.

"Judge Childs is among multiple individuals under consideration for the Supreme Court, and we are not going to move her nomination on the Court of Appeals while the President is considering her for this vacancy," White House spokesman Andrew Bates said in a statement.

The Washington Post first reported the White House's confirmation that Childs is under consideration.

House Majority Whip Jim Clyburn, a South Carolina Democrat, has championed Childs and has lobbied the White House and the President directly to select her to replace outgoing Justice Stephen Breyer on the bench.

Breyer's seat may be the only one that Biden fills on the Supreme Court. With Democrats holding only the narrowest of majorities in the Senate, Biden will have to choose someone who can safely get 50 votes there for confirmation (Vice President Kamala Harris could provide the tie-breaking vote if the Senate is split on the nomination).

Biden at the White House on Thursday confirmed the nominee will be the first Black woman on the high court, saying: "It's long overdue, in my opinion."

"Our process is going to be rigorous. I will select a nominee worthy of Justice Breyer's legacy of excellence and decency," the President said. "While I've been studying candidates' backgrounds and writings, I've made no decision except one: The person I will nominate will be someone with extraordinary qualifications, character, experience and integrity. And that person will be the first Black woman ever nominated to the United States Supreme Court."

Biden said he will make his choice by the end of February.

A shortlist of potential nominees had been circulating Washington well before Breyer's retirement plans became public, and officials in the White House Counsel's office built files on various candidates in anticipation of a potential vacancy.

Childs is one of a number of women who have been said to be on the President's shortlist, including DC Circuit Judge Ketanji Brown Jackson, California Supreme Court Justice Leondra Kruger and civil rights attorney Sherrilyn Ifill.

A graduate of the University of South Carolina School of Law, Childs does not have the Ivy League pedigree shared by eight of the nine justices. Her cheerleaders have touted her public-school education and other elements of her background as an advantage for Democrats, according to a 2021 New York Times report, and as a way to fight back against claims that the party has become too elitist in its makeup.