White House chief of staff: 'We are not going to control the pandemic' 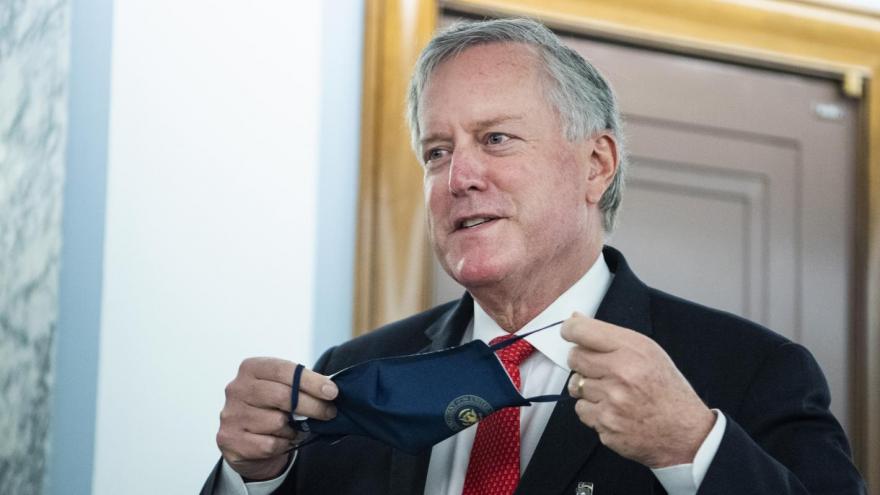 (CNN) -- White House chief of staff Mark Meadows said Sunday that the US is "not going to control" the coronavirus pandemic, as cases surge across the country and nearly 225,000 Americans have died from the virus.

The comments from President Donald Trump's chief of staff come as coronavirus cases surge across the US and the administration continues to consistently disregard advice from government health experts to wear masks, social distance and avoid large gatherings as a way to curb the spread of the virus. The White House is also facing a potential second outbreak of the virus after at least five people in Pence's inner circle have tested positive in recent days, according to a source familiar with the situation.

Pressed by Tapper on why the US isn't going to get the pandemic under control, Meadows said: "Because it is a contagious virus just like the flu." He added that the Trump administration is "making efforts to contain it."

"What we need to do is make sure that we have the proper mitigation factors, whether it's therapies or vaccines or treatments to make sure that people don't die from this," Meadows said.

The US reported its second-highest day of new cases on Saturday, with nearly 84,000 Americans contracting the deadly virus. As of Sunday, there were at least 8,575,000 total cases of coronavirus in the US, and at least 224,800 Americans have died from the virus, according to Johns Hopkins University.

But as concerns grow that more people surrounding the vice president could test positive in the coming days, Pence, who is the head of the White House's coronavirus task force, does not currently plan to self-quarantine, in defiance of US Centers for Disease Control and Prevention guidelines, and will continue campaigning as the election nears.

Vice presidential chief of staff Marc Short, close aide Zach Bauer and outside adviser Marty Obst were among those within the vice president's orbit who have tested positive, sources told CNN.

On Sunday evening, Short told CNN that he is experiencing mild symptoms after testing positive. "I am doing OK. Hard to know if the symptoms are Covid related or four years of working at the White House. Symptoms are mild," he said.

Bauer -- one of the staffers who tested positive, according to two sources familiar with the matter -- serves as Pence's "body man," meaning his job is to accompany Pence throughout the day and night helping him with a wide range of duties, putting him in close proximity to the vice president. A source familiar with the matter told CNN that Bauer has not been in the office since Tuesday, when he went home to quarantine after coming into contact with Obst. Bauer tested positive Saturday.

The vice president and second lady Karen Pence each tested negative for coronavirus on Sunday, a White House official said.

"I spoke to the vice president last night at midnight and I can tell you that what he is doing is wearing a mask, socially distancing and when he goes up to speak he will take the mask off and put it back on," Meadows said. "He is wearing a mask as it relates to this particular thing because the doctors have advised him to do that."

Meadows also refused to disclose the extent of the Covid-19 outbreak in Pence's orbit, saying the administration doesn't share personal information and that such disclosures are only appropriate in the case of the President, vice president or those in their inner circle.

"Anytime there's someone in harm's way, we have an obligation to let people know for contract-tracing," he said.

Meadows argued that Pence would continue with travel plans because he is "essential personnel."

"I'm not saying he is not campaigning, I'm saying that is only part of what he is doing and as we look at that, 'essential personnel,' whether it's the vice president of the United States or anyone else, has to continue on," he said.

Pence, who is known to rarely wear a mask while flying on Air Force Two, traveled on Saturday to Florida for campaign rallies in Lakeland and Tallahassee. The vice president walked across the tarmac from Marine Two in a mask and boarded Air Force Two about an hour behind schedule.

Pence emerged maskless from Air Force Two in Florida, running down the steps and jogging across the tarmac, fist pumping as he approached the podium.

An official told CNN's Kevin Liptak on Sunday that Pence is expected to campaign every day until Election Day and those plans remain in place for now.

After visiting North Carolina later Sunday, the vice president is traveling to Minnesota on Monday and back to North and South Carolina on Tuesday. He's also expected to return to the upper Midwest this week. The official said Pence would continue to be tested but, like Trump, still plans to be on the road every day for the next week.

'They are admitting defeat'

California Sen. Kamala Harris, the Democratic nominee for vice president, said Sunday that Pence "should be following the guidelines," when asked about his decision to continue campaigning despite news of the positive tests. "We're doing it. I think what we have modeled (is) the right and good behavior, and they just take our lead."

Harris canceled travel a week ago "out of an abundance of caution" after two people in her orbit tested positive for the virus.

Harris, speaking shortly after arriving in Detroit, said that Meadows' comments to Tapper on Sunday show the Trump administration is "admitting defeat."

"We are breaking records of the number of people that are contracting, a deadly virus, and this administration fails to take personal responsibility or responsibility in terms of leading the nation through this dangerous, dangerous and deadly mass casualty event," she said. "And that's why they have forfeited their right to a second term in office."

Democratic presidential nominee Joe Biden echoed that sentiment in a statement later Sunday, saying that Meadows "admitted this morning that the administration has given up on even trying to control this pandemic, that they've given up on their basic duty to protect the American people."

"It's long past time for President Trump and his administration to listen to the scientists, take action, and finally take seriously the threat of a virus that's costing thousands of lives each week, shuttering our schools, and forcing millions of Americans out of work," Biden said.

Senate Majority Whip John Thune told reporters later in the day that "we all have control" of the virus and emphasized that leaders have a responsibility to take actions to slow the spread.

"I don't know exactly what he meant by that statement. I do think we have some control," the South Dakota Republican said in response to Meadows' Sunday comments. "We all have control, and we all have responsibility as leaders to set an example that consists of doing the right thing to stop the spread. That is encouraging wearing a mask and encouraging social distancing."

"We all know that stops the spread," he continued. "Science proves that."