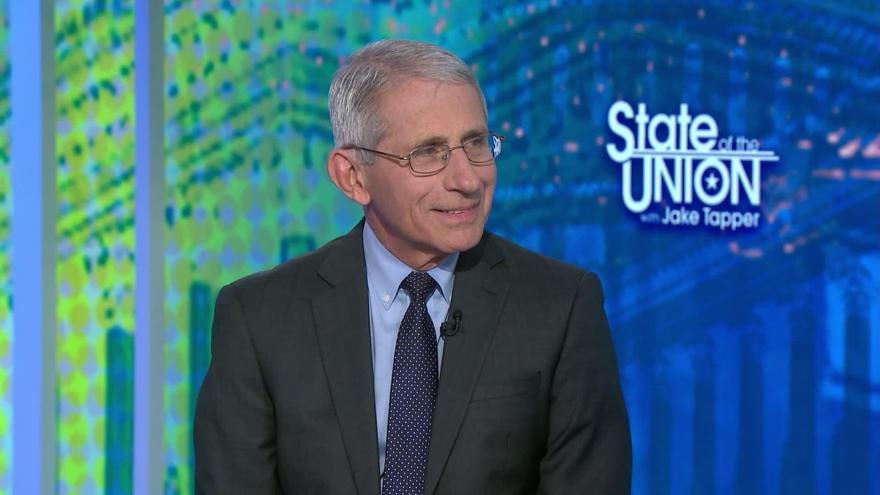 (CNN) -- The White House is blocking Dr. Anthony Fauci, a key member of the administration's coronavirus task force, from testifying before the Democratic-led House next week, according to a spokesman from a key House committee.

"While the Trump Administration continues its whole-of-government response to COVID-19, including safely opening up America again and expediting vaccine development, it is counter-productive to have the very individuals involved in those efforts appearing at Congressional hearings," Deere said in a statement. "We are committed to working with Congress to offer testimony at the appropriate time."

Press secretary Kayleigh McEnany followed up on Deere's comments, explaining in an interview Saturday the reasoning behind the White House's decision.

"When we pressed for details as to why Dr. Fauci in particular was the right person for the testimony and this hearing, those details were never provided," McEnany said in a Fox News interview.

In a gaggle with reporters after her interview on Fox, McEnany said the administration wanted to make sure that the "subject matter of the hearing matched the individual they're requesting" and in this case, "there was never any clarity given forth as to what the actual subject matter of this hearing would be."

Though when asked by CNN's Jeremy Diamond if Fauci or other officials will be allowed to testify in front of other House committees in the future, McEnany said "absolutely."

It appears Fauci is expected to testify in front of a committee of the Republican-led Senate committee during May. He will testify before the Senate Health, Education, Labor and Pensions Committee on May 12, per an aide to the panel's chairman, Sen. Lamar Alexander, a Tennessee Republican.

"Chairman Alexander looks forward to hearing from Dr. Fauci and other administration officials at the Senate health committee's second hearing back, which will be on Tuesday, May 12," the aide told CNN.

While the move to block House testimony comes after the House abruptly canceled plans on Tuesday to return to the Capitol next week, it prevented a potential meeting between a blunt, high-ranking expert who has dissented from President Donald Trump's account of the federal response and lawmakers gearing up for an oversight battle. Fauci has repeatedly veered from Trump's framing of the federal government's handling of the pandemic, as recently as the past few days.

On Friday, Trump said that he is generally supportive of Georgia's efforts to reopen some businesses, but that he is upset with Gov. Brian Kemp's decision to open spas and tattoo parlors before meeting federal guidelines on such businesses reopening.

"I think it's wonderful. I want to see us open safely. But I didn't like spas and tattoo parlors and I was not thrilled about that, but I said nothing about Georgia other than that," Trump said.

Fauci had struck a different tone during a CNN town hall Thursday night, lamenting that "there are some states, some cities ... kind of leapfrogging over the first checkpoint."

"And, I mean, obviously you could get away with that, but you are making a really significant risk," he added. "I hope they can actually handle any rebound that they see."

Fauci was also critical of the current testing capacity during his testimony before the House Committee on Oversight and Government Reform in March.

"The system does not, is not really geared to what we need right now, to what you are asking for," he told lawmakers at the time.

"It is a failing. Let's admit it," he said, adding that "the idea of anybody getting it easily, the way people in other countries are doing it, we are not set up for that. Do I think we should be? Yes. But we are not."

Testing has proven to be a continued sticking point between Trump and Fauci.

Fauci said during a Time 100 Talks interview last week that he was "not overly confident right now at all, that we have what it takes to" significantly ramp up testing.

Trump pushed back during a press briefing later that day -- from which Fauci was absent -- and said that "I don't agree with him on that, no. I think we're doing a great job on testing."

The decision to keep Fauci from appearing before the House committee comes as House Democrats are preparing for a multi-front investigation into the federal coronavirus response.

The CARES Act coronavirus aid package created a Pandemic Response Accountability Committee, made up of 21 members from offices of inspectors general across the federal government, to help coordinate investigations into various elements of the outbreak response.

Some of the investigations are already underway. The inspectors general from three key agencies updated the House Oversight Committee on Tuesday on four investigations into potential issues with the federal government's coronavirus response, the committee said.

The watchdogs referenced plans for the use of "flash reports" to provide frequent updates on the probes, as well as possible protections for the inspectors general in light of Trump's ouster of several such independent watchdogs, according to a news release from the committee.

CORRECTION: This story has been updated to correct the last name of House Appropriations Committee spokesman Evan Hollander in one reference.

This story has been updated with additional details from the White House press secretary on Saturday.