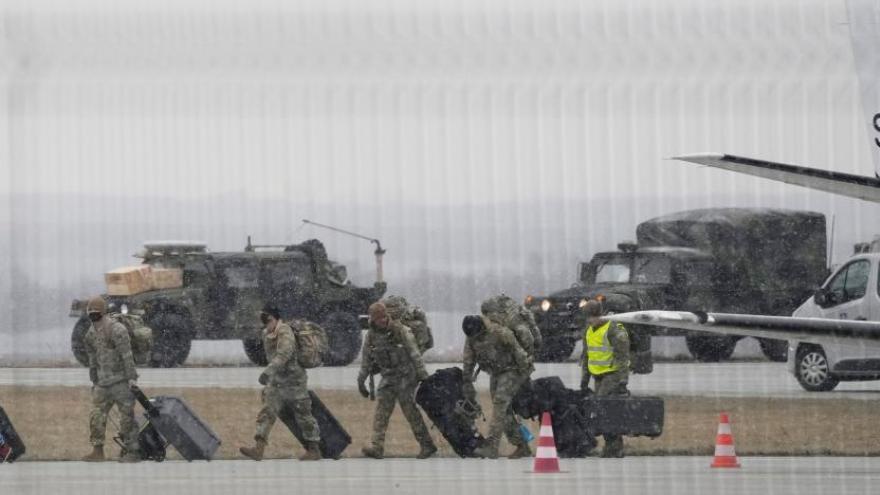 The White House has approved a plan presented by the Pentagon for the nearly 2,000 US troops in Poland to help Americans who may try to evacuate Ukraine if Russia invades, according to two US officials familiar with the matter.

(CNN) -- The White House has approved a plan presented by the Pentagon for the nearly 2,000 US troops in Poland to help Americans who may try to evacuate Ukraine if Russia invades, according to two US officials familiar with the matter.

The US forces are not currently authorized to enter Ukraine itself if a war breaks out, and there are no plans for them to conduct a noncombatant evacuation operation akin to the US operation in Afghanistan last summer, the officials emphasized.

Instead, the plan as it now stands is that the troops, who are from the 82nd Airborne Division, will begin setting up processing areas and temporary shelters inside Poland near Ukraine's border where Americans fleeing Ukraine could go for help while in transit. The facilities have not yet been stood up, one defense official said, but will start to be as more US troops arrive in Poland.

The Wall Street Journal first reported that the White House had approved the Pentagon's plan.

"They can do a lot of things," Kirby said, when asked whether they would help with any potential evacuation. "It's a very versatile force. And I think their versatility, their ability to -- to move quickly and to conduct a range of missions across a range of contingencies, which is well proven, that's the reason why the secretary has ordered them to go."

Asked about the planning, a White House official told CNN that "these are multi-mission forces, trained and equipped for a variety of missions to deter aggression and to provide reassurance to NATO Allies. We are constantly evaluating the evolving security situation and planning for a range of contingencies as we always do, but to be clear we are not planning for a mass evacuation of American citizens from Ukraine. President Biden has been clear that we believe Americans in Ukraine would be wise to leave Ukraine."

The White House official also pointed to White House Press Secretary Jen Psaki's comments late last month when asked under what circumstances the US would evacuate American citizens and diplomats from Ukraine, and whether it could be done without the US military.

"There is not an intention for there to be a departure or an evacuation" using the military, Psaki said. "So we are conveying to American citizens they should leave now. There is not precedent, beyond Afghanistan, for that to be how it operates."

The State Department announced late last month that it would reduce staff levels at the US Embassy in Kyiv, Ukraine, beginning with the departure of nonessential staff and family members. It also issued the highest-level travel advisory for Ukraine, telling Americans not to travel to the country and to be aware of reports that Russia is planning for significant military action.

State Department officials have repeatedly urged Americans to leave the country now, warning that US government assistance would be "severely impacted" if there is Russian military action in the country.

Russia's military buildup is continuing. In the last 24 hours, Moscow has added approximately 2,000 combat forces to the border areas near Ukraine, according to an administration official. The current assessment is that more will be added in the coming days based on current intelligence.

The US has estimated that Russia has more than 100,000 troops near the Ukraine border. Comprised of approximately 100 battalion tactical groups (BTGs) with more on the way. A Russian BTG is a formation that can include between 800 to 1,000 troops. But US officials have long said it is not clear how fully the Russians are manning all these units.

There is currently no sign of any Russian military pullback, the official said.