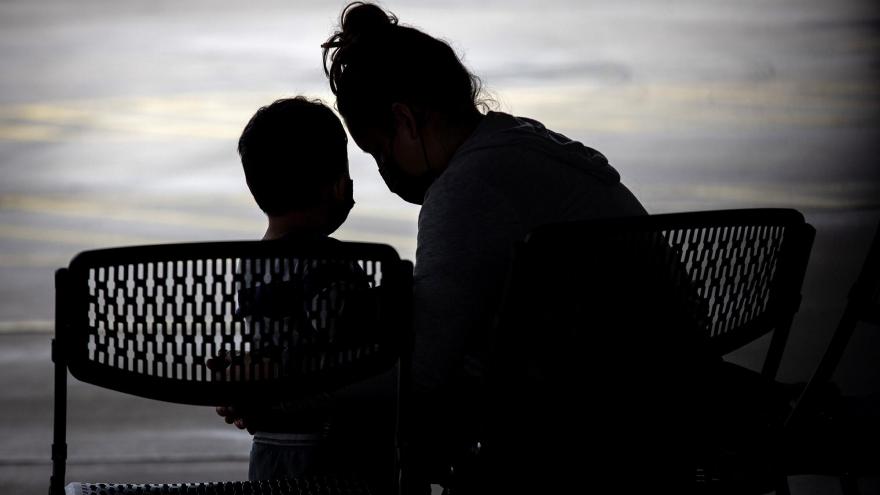 The White House announced a sweeping immigration bill Thursday that would create an eight-year path to citizenship for millions of immigrants already in the country and provide a faster track for undocumented immigrants brought to the US as children.

(CNN) -- The White House announced a sweeping immigration bill Thursday that would create an eight-year path to citizenship for millions of immigrants already in the country and provide a faster track for undocumented immigrants brought to the US as children.

The legislation faces an uphill climb in a narrowly divided Congress, where House Speaker Nancy Pelosi has just a five-vote margin and Senate Democrats do not have the 60 Democratic votes needed to pass the measure with just their party's support.

Administration officials argued Wednesday evening that the legislation was an attempt by President Joe Biden to restart a conversation on overhauling the US immigration system and said he remained open to negotiating.

"He was in the Senate for 36 years, and he is the first to tell you the legislative process can look different on the other end than where it starts," one administration official said in a call with reporters, adding that Biden would be "willing to work with Congress."

The effort comes as there are multiple standalone bills in Congress aimed at revising smaller pieces of the country's immigration system. Sens. Lindsey Graham, a Republican from South Carolina, and Majority Whip Dick Durbin, a Democrat from Illinois, for example, have reintroduced their DREAM Act, which would provide a path to citizenship for immigrants who came to the country illegally as children.

Administration officials said the best path forward and plans either to pass one bill or break it into multiple pieces would be up to Congress.

"There's things that I would deal by itself, but not at the expense of saying, 'I'm never going to do the other.' There is a reasonable path to citizenship," Biden said at a CNN town hall in Milwaukee on Tuesday.

"The President is committed to working with Congress to engage in conversations about the best way forward," one administration official said.

Officials did not say if they believed that the reconciliation process, a special budget tool that applies only to a specific subset of legislation and allows the Senate to pass bills with a simple majority, would be applicable for an immigration bill. "Too early to speculate about it right now," one official said.

The Senate is working on passing the President's coronavirus relief legislation through reconciliation. The expectation is that the administration could also use the process to pass an infrastructure bill.

House Speaker Nancy Pelosi told reporters Thursday she didn't necessarily think immigration reform will need to be passed via reconciliation. She also noted that some people want to take a piecemeal approach to the issue and "that may be a good approach too."

Biden's immigration bill will be introduced by Democrats Bob Menendez of New Jersey in the Senate and Linda Sanchez of California in the House.

Menendez conceded Thursday Democrats will have to negotiate, but noted, "We're not going to make concessions out of the gate."

"We'll never win an argument that we never have the courage to make," Menendez said.

"We have a President and an administration that is willing to put political muscle behind making sure that we can get this across the finish line," Sanchez added.

Here's what the bill, titled the US Citizenship Act of 2021, includes:

Plan for a pathway to citizenship

The legislation goes further than the last effort in 2013 by cutting the time to acquire citizenship to eight years instead of 13, according to an administration official.

First, individuals would be in a temporary status for five years, with three years until they get citizenship, amounting to an eight-year path.

There's an exception for undocumented immigrants who came to the US as children, who fall under a form of humanitarian relief known as Temporary Protected Status or who are farmworkers. Those individuals can go directly to green cards if they meet requirements, including passing background checks.

To be eligible for the bill's legalization plan, immigrants must have been in the country before January 1, 2021.

Biden's proposed bill, if passed, also would remove the word "alien" from US immigration laws, replacing it with the term "noncitizen." The change, an administration official said, is "to better reflect the President's values on immigration."

US code currently defines "alien" as "any person not a citizen or national of the United States."

Officials in the past have pointed to the term's prevalence in US laws to defend their word choices.

But the term "illegal alien," long decried as a dehumanizing slur by immigrant rights advocates, became even more of a lightning rod during the Trump era -- with some top federal officials encouraging its use and several states and local governments taking up measures to ban it.

The bill would exempt certain categories from counting toward annual caps. For example, spouses, partners and children under the age of 21 of lawful permanent residents would be exempt from the caps.

The bill also provides funding to US Citizenship and Immigration Services to chip away at the backlog of asylum applications.

Changes to the legal immigration system

The bill provides funding for more immigration judges and puts an emphasis on access to counsel. It authorizes funding for counsel for children and vulnerable individuals, and eliminates the one-year limit for filing an asylum case.

The measure would also repeal the bars to reentering the United States if an individual had previously been illegally residing in the country.

It increases the number of available so-called diversity visas, which are awarded by random selection in select countries to promote immigration from places that don't otherwise send many immigrants to the US. The bill would up the number of visas granted annually from 55,000 to 80,000, according to an administration official.

The legislation proposes creating a commission composed of employers, labor unions and civil rights advocates to make recommendations on improving worker verification, according to an administration official. The measure would also increase protections for immigrants who come forward to report labor violations and increase penalties for employers who knowingly hire undocumented workers.

The bill would address root causes of migration and work to tackle them by, for example, cracking down on smugglers and narcotics and trafficking networks. It would seek to create legal and safer pathways for migration by setting up refugee processing in Central America and would create a $4 billion investment plan in the region.

"It will be developed in a bipartisan manner, first of all, but it also will require countries in the region to reaffirm a commitment to corruption, to invest their own resources and take action to reform their systems," an administration official said.

The measure also includes enhancing technology and infrastructure at the border, like enhanced screening at ports of entry.

This story has been updated with comment from lawmakers.