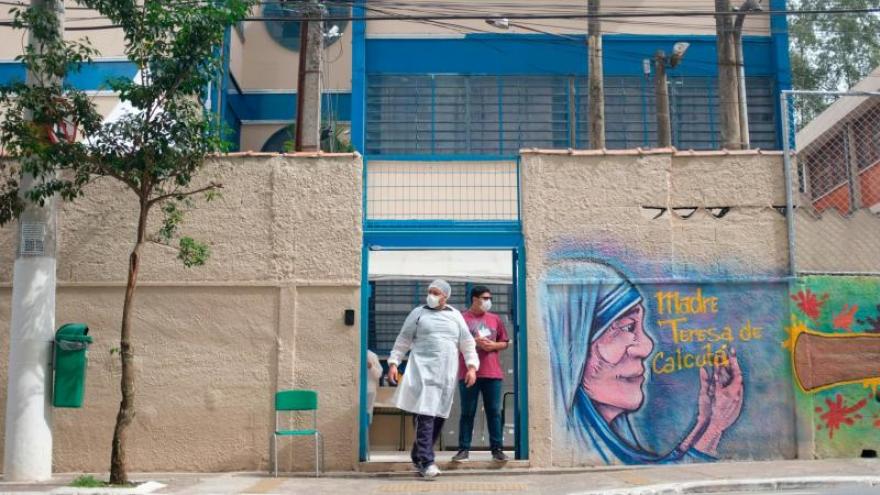 A school in the sprawling favela of Paraisopolis is being used as an isolation center for people with coronavirus.

(CNN) -- President Donald Trump has issued a proclamation suspending entry into the US for any individual who has been in Brazil within 14 days immediately preceding their attempt to enter the United States.

The proclamation is aimed at limiting the spread of coronavirus coming into the United States from Brazil, the country with the second most cases worldwide, according to Johns Hopkins University. As of Sunday evening, Brazil had more than 347,000 confirmed cases of coronavirus.

"Today's action will help ensure foreign nationals who have been in Brazil do not become a source of additional infections in our country," White House press secretary Kayleigh McEnany said Sunday. "These new restrictions do not apply to the flow of commerce between the United States and Brazil."

On Monday, the White House released an amendment to the travel suspension for Brazil, moving the effective date up by two days to Tuesday at 11:59 p.m. CNN has asked the White House the reason for the change.

Earlier on Sunday, national security adviser Robert O'Brien said that the Trump administration was likely to announce new restrictions on travel to Brazil.

O'Brien, during an interview with CBS' "Face the Nation," said White House officials "hope that will be temporary." He said the White House would "take a look at the other countries on a country by country basis" in that region.

Asked about reporting that the European travel restrictions from mid-March came too late to stop the virus from spreading throughout the US, O'Brien highlighted Trump's decision to restrict some travel to China but suggested US officials were unaware that people traveling through Europe from China could bring Covid-19 to America in the weeks before the European travel restrictions were implemented.

"We didn't know at the time but we later learned that the Chinese continued to allow people to travel from Wuhan to Europe," he said.

Coronavirus has yet to peak in Sao Paulo, Brazil's largest and worst-infected city, but the health care system is already beginning to break down. As the crisis deepens and the number of deaths continues to rise, President Jair Bolsonaro is urging businesses to reopen. He opposes many governors who are stressing social distancing measures to slow the spread.

Far from hospitals, Brazil's indigenous people are dying at an alarming rate. The death toll is double that of the rest of Brazil's population, according to the advocacy group Articulation of Indigenous Peoples of Brazil.

APIB has recorded more than 980 officially confirmed cases of coronavirus and at least 125 deaths, which suggests a mortality rate of 12.6% -- compared to the national rate of 6.4%.

This story has been updated with the White House's amendment to the travel suspension.