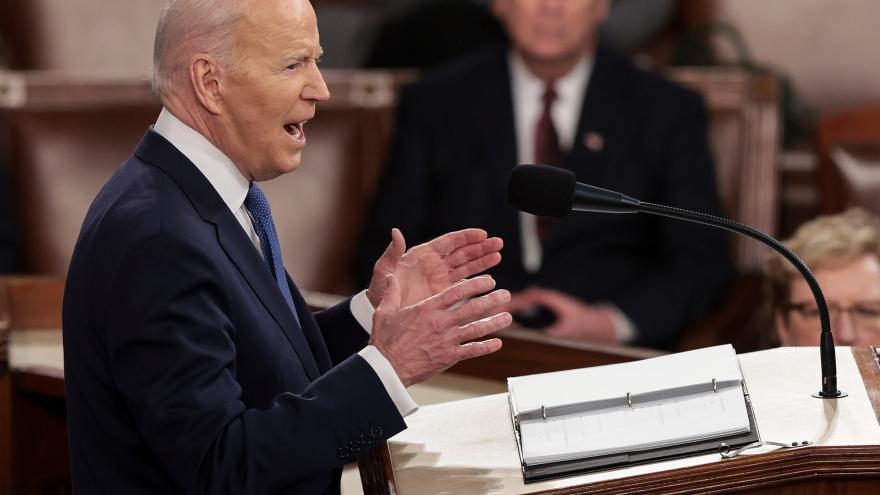 (CNN) -- President Joe Biden imposed new sanctions Thursday on eight members of the Russian elite, along with members of their families, as he warned Russia is intensifying its bloody invasion of Ukraine with indiscriminate bombing.

The new sanctions are the Biden administration's latest attempt to squeeze Russian President Vladimir Putin as the invasion of Ukraine advances.

"The goal is to maximize the impact on Putin and Russia," Biden said, accusing the oligarchs he is targeting of lining "their pockets with Russian people's money while Ukraine and the people are hiding in the subway from missiles that are being fired indiscriminately."

"Our interest is to maintain the strongest unified economic campaign on Putin in all history, and I think we're really on the way to doing that," Biden said.

The new list of individuals described as "Putin's cronies and their family members" will be cut off from the US financial system, their assets in the US will be frozen and their property will be blocked from use, according to a fact sheet from the White House.

There will be full blocking sanctions on eight Russian elites, plus their family members and associates.

It includes a move to target Putin ally Alisher Burhanovich Usmanov, "one of Russia's wealthiest individuals," according to the White House, and will include his super-yacht and private jet.

The US is also sanctioning Putin spokesman Dmitry Peskov, whom the White House describes as "a top purveyor of Putin's propaganda."

"The United States and governments all over the world will work to identify and freeze the assets Russian elites and their family members hold in our respective jurisdictions -- their yachts, luxury apartments, money, and other ill-gotten gains," the fact sheet said.

According to the White House, the individuals who will be subject to full blocking sanctions are:

The US will also impose visa restrictions on 19 oligarchs and 47 of their family members and close associates, the fact sheet from the White House said.

That will target oligarchs "known to direct, authorize, fund, significantly support, or carry out malign activities in support of Russia's destabilizing foreign policy."

It will also designate "26 Russia and Ukraine-based individuals who play central roles in these organizations, enabling the Government of the Russian Federation's efforts to spread disinformation and influence perceptions as a part of their invasion of Ukraine."

Biden has vowed to go after the "ill-begotten gains" of Russian oligarchs, including their private jets, luxury apartments and yachts. The Justice Department announced a task force Wednesday comprised of various US law enforcement agencies designed to enforce sanctions against oligarchs, calling the initiative "Kleptocapture."

Biden is scheduled to assemble his Cabinet for a meeting Thursday afternoon as Russia's invasion of Ukraine enters its second week and most of his administration is involved in the US response.

The Cabinet meeting, which is scheduled for 2 p.m. ET, is expected to focus much more heavily on foreign policy than usual, CNN has reported. The President is expected to make brief remarks at the start of the meeting on the latest developments in Ukraine.

It is the fourth Cabinet meeting of Biden's presidency. Nearly every agency or department expected to be represented at the meeting has played some type of role in the administration's response to the crisis in Ukraine.

Vice President Kamala Harris traveled to Germany last month to meet with allies and deliver a message from the US at the Munich Security Conference. Defense Secretary Lloyd Austin has assumed overall responsibility for military aid to Ukraine, including the Stinger anti-aircraft missiles that were delivered this week. Treasury Secretary Janet Yellen has quarterbacked the sanctions packages rolled out over the last week by the administration and also worked with phones with counterparts in Europe to ensure they are aligned. The Biden administration is planning to impose new sanctions on Russian oligarchs and members of their families as soon as Thursday, sources familiar with the matter said.

Energy Secretary Jennifer Granholm worked this week to coordinate the release of 30 million barrels from the US Strategic Petroleum Reserve, along with other nations. Homeland Security Secretary Alejandro Mayorkas will have oversight of potential temporary protection status for Ukrainian refugees, along with ensuring there are no spillover security concerns within the US.

Director of National Intelligence Avril Haines has led the US intelligence community at one of its most extraordinary junctures as the Biden team employs a strategy of declassifying and releasing intelligence about Russia's intentions and plans. She also traveled to Europe to coordinate intelligence sharing with allies.

US Ambassador to the UN Linda Thomas-Greenfield has assumed her highest-profile yet with speeches at the Security Council and General Assembly castigating Russia for its invasion. Acting Office of Management and Budget Director Shalanda Young will head-up White House efforts to secure $10 billion in lethal and humanitarian aid for Ukraine.

Secretary of State Antony Blinken will not be in attendance because he is traveling to Europe for meetings today with NATO allies.

The President dedicated a large portion of his State of the Union address on Tuesday to the conflict as Ukraine's cities continue to be attacked by Russian forces.

One million refugees have fled Ukraine in just a week, according to the United Nations, as Russian troops attempt to press further into the nation.

Ukrainian forces have so far been able to stave off Russia's initial push and have maintained control of Kyiv and other major cities, but Russia is now bringing in more destructive weaponry and increasingly striking civilian infrastructure, CNN has reported. As the invasion enters a second week, Ukrainian President Volodymyr Zelensky is pleading for more international assistance.

The US and its allies have taken a wide range of actions in recent weeks intended to punish Moscow for the invasion, including harsh new sanctions and export controls aimed at imposing severe costs on the Russian economy.

Biden announced on Tuesday the US would ban Russian aircraft from US airspace, joining a growing number of countries who have closed their skies to Russia. The US and its allies have also agreed to release 60 million barrels of oil from their reserves.

The US will also prohibit American dollar transactions with the Russian central bank and fully block the Russian direct investment fund to prevent Russia from mitigating some of the effects of the sanctions.

The White House, along with the European Commission, France, Germany, Italy, the United Kingdom and Canada, announced this weekend they would expel certain Russian banks from SWIFT, the high-security network that connects thousands of financial institutions around the world. In a major break from its longstanding neutrality, Switzerland also announced it would join the European Union in imposing sanctions on Russia.