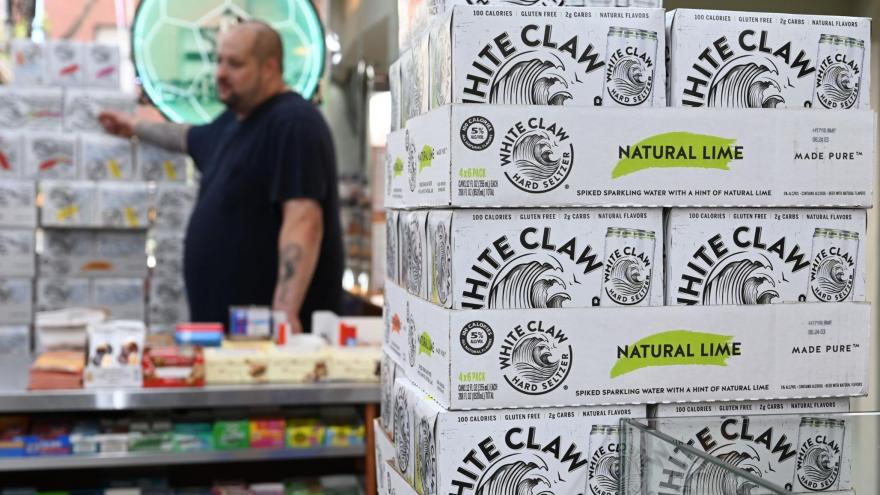 (CNN) -- This was the summer of White Claw. The hard seltzer brand's sales projections prove it.

Sales of White Claw, owned by alcoholic beverage company Mark Anthony Brands, will surpass $1.5 billion this year, according to Sanjiv Gajiwala, the company's senior vice president of marketing. In a recent panel discussion for "The Table," a closed-door event series produced by CNN Business, Gajiwala told Innovation Correspondent Rachel Crane that he predicts the overall category will make between $2 billion to $2.5 billion, with White Claw having about a 60% share. Nielsen estimated in July that hard seltzer sales surged 200% from the year prior.

Gajiwala said the company is betting hard seltzer sales will continue to grow.

"I think there are core trends that consumers are engaging in, which are about mindfulness or understanding what they're putting in their body. They want convenience, they want premium and they want flavor and variety," Gajiwala said. "White Claw does all of those things."

Gajiwala joined the fourth installment of "The Table," along with David Heath, co-founder and CEO of sock startup Bombas, and Monica Royer, founder and CEO of children's organic clothing brand Monica + Andy. These companies were founded in 2013 or later and represent a class of brands that have successfully appealed to the new consumer mindset.

Despite the flood of store closings and recent bankruptcies, the brands are each bullish on brick-and-mortar retail.

"We're dying to open up our first retail store," Bombas' Heath said. "For us, our putting a hold on retail was mostly around the idea that creating a sock-only destination store probably didn't make a whole lot of logical sense."

For White Claw, brick-and-mortar retail makes up a large portion of their sales.

"Alcohol beverage ends up being a really great destination for [grocery stores.] It's one of the few things you really can't deliver to your house. You have to go pick it up in a store or you have to be able to show an ID for delivery," Gajiwala said.

Monica + Andy is going for a "small and more curated" store experience, Royer said. The brand has two stores in New York, two in Illinois, one in Los Angeles and one in New Jersey.

"Customers are coming in, and they're having a defined experience. I think once you become really big, it becomes more difficult to manage so much product and what you do with it," Royer said. "You want to make sure that you don't have so much of an assortment that your customers don't really know what to buy."

White Claw's decision to limit its flavor selection comes down to easing the purchase experience as well.

"I think one of the things that's drawn people to White Claw is the simplicity," Gajiwala said. "A lot of the other seltzer brands have 12, 13, 14 flavors. We have six. It makes it a lot easier to choose."

Both Bombas and White Claw have struggled to keep up with consumer demand.During the 2018 holiday season, Bombas was about 15 days behind orders and seven days behind in responding to customers, Heath said. The company refunded affected customers and gave them gift cards for the same amount as their purchase.

"We just had to triage the situation, and it sucks, but I always say it's better to sell out than to have too much," Heath said. "When you're growing at 300% year-over-year, it's like throwing a dart at a dartboard. There's no way you will ever get demand right when you're growing that fast."

White Claw invested for a 300% growth rate this year but ended up at 360%, Gajiwala said. The company reported a shortage in September and strategized to allocate supply to all of its distribution partners.

"We have distributors. We can manage inventory. We have really clear visibility," Gajiwala said. "While there's been a little bit of shortage here and there, we actually feel that the consumers that need to get White Claw are able to get it, and we'll just continue to invest in more capacity for going forward."