Whistleblower complaint about Trump declassified and may be released Thursday 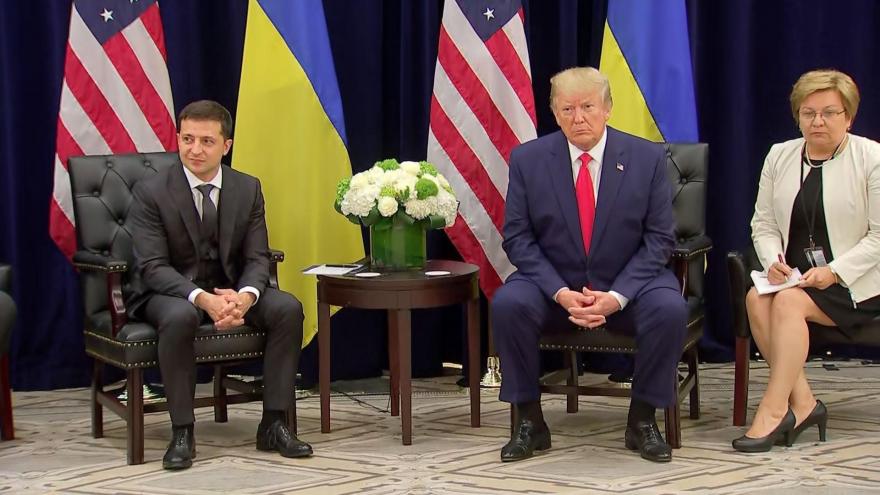 A whistleblower's complaint about President Donald Trump's communications with Ukraine will be delivered Wednesday afternoon to Capitol Hill for lawmakers to review, Sen. John Cornyn said.

(CNN) -- The whistleblower's complaint about President Donald Trump's communications with Ukraine has been declassified and could be released as soon as Thursday morning, three sources told CNN late Wednesday night.

The first two sources spoke to CNN after Rep. Chris Stewart, a Republican member of the House Intelligence Committee, said on Twitter late Wednesday night that the complaint had been declassified.

The Washington Post, citing a person who has read the complaint, said the document "alleges a pattern of obfuscation at the White House," including that officials moved the records of some of Trump's conversations with foreign officials to a "separate computer network from where they are normally stored."

The complaint was hand delivered Wednesday afternoon to Capitol Hill, giving lawmakers their first chance to see the classified account that spurred Democrats to launch a formal impeachment inquiry. Democrats reading the document, which is available to lawmakers in two secure facilities, one in each chamber, say it backs up their commitment to their investigation. The Office of the Director of National Intelligence also has provided a redacted version to Congress that members can bring to an open hearing, a spokesperson said.

The complaint's delivery came just hours after the White House released a rough transcript of a July 25 phone call that shows the President repeatedly pressed the leader of Ukraine to investigate former Vice President Joe Biden and his son.

"I found the allegations deeply disturbing," said House Intelligence chairman Adam Schiff, D-California. "I also found them deeply credible and I understand why the inspector general found them credible."

He also said he thought the complaint was "very well done."

"Having read the documents in there, I'm even more worried about what happened than I was when I read the memorandum of the conversation," said Senate Minority Leader Chuck Schumer.

California Democrat Rep. Eric Swalwell said the whistleblower "invokes other witnesses to the disturbing conduct" in the complaint, and lays out "a lot of other documents."

Swalwell, a member of the House Judiciary and Intelligence committees, told CNN's Wolf Blitzer that acting Director of National Intelligence Joseph Maguire is blocking lawmakers from seeing the full report, but said he was able to read the whistleblower's complaint.

Missouri Republican Sen. Roy Blunt told reporters the report was about 10 or 12 pages long, but said he didn't count the pages. He said he was not more concerned now than before he read the report.

The conversation between Trump and Ukrainian President Volodymyr Zelensky is included in the whistleblower complaint, a source familiar with the situation said last week, a revelation only raised more questions in the ongoing controversy.

Trump has downplayed the significance of the complaint, claiming the whistleblower is partisan and his conversations with foreign leaders are "appropriate."

During a news conference in New York, the President claimed the individual -- who has not been identified -- "didn't have any first class or first rate or second tier information from what I understand."

Trump said he has told House Republicans he wants "full transparency on the so-called whistleblower information," but continued to peddle conspiracy theories about the Bidens and Ukraine.

"I'm not going to talk about classified information, you know better than that," said Sen. John Cornyn, a Texas Republican.

Sen. Angus King, an independent from Maine, said he still has some "open questions" so he'd rather not comment further.

Sen. Richard Burr, the Republican chairman of the Senate Intelligence Committee, said he has started to read the document but declined to give his initial thoughts.

One Republican who did speak to reporters, Rep. John Ratcliffe, said the best evidence he saw was the transcript of Trump's call with the Ukrainian President "as opposed to an accounting of the conversation from someone who wasn't there."

"It provided information beyond the transcript," he said of the complaint, but wouldn't weigh in on whether that information is detrimental or beneficial to Trump.

However, the inspector general -- who spoke at a closed-door briefing last week -- would not say if those instances involved Trump, the sources said.