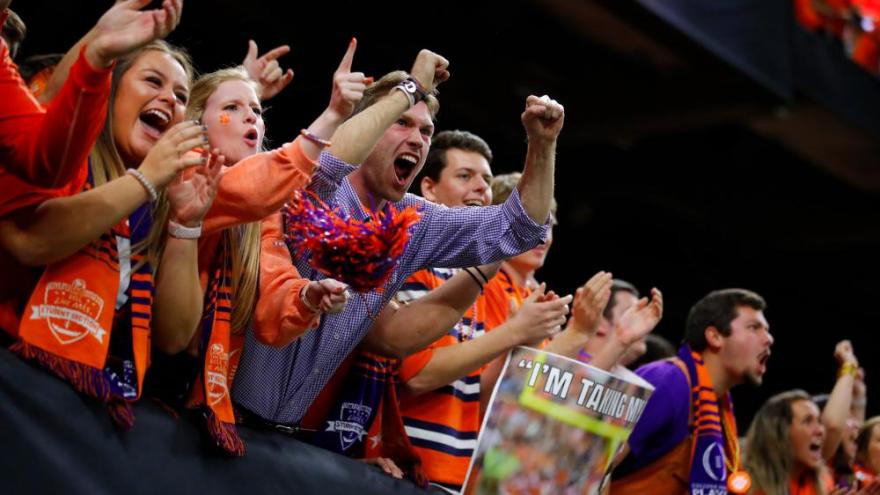 Your team may not be playing, but here is a guide to get your cheering this season.

(CNN) -- College football is back, but this year could be a little less exciting if your FBS conference or team isn't playing. So, instead of sidelining your fandom, let's find another team worthy of your body paint.

There are six conferences playing football this fall and three independent teams.

That means four conferences will have fans on the bench.

Based on geography and play-calling, each conference that is set to face-off will be paired with a similar conference that will not see the field this season. In order to find a team worthy of your watch party, next look for the team closest to your address or a team with a similar or same mascot. If there are more than two options, color may need to come into play.

Remember, this is only a guide. If you are a house divided and one of your teams is playing, stick to what you know.

Let's start with the most obvious.

If you are a fan of a team in either of these conferences, you won't see a lot of defense. Not that it's a bad thing of course, but Pac-12 fans, it's pretty safe to pledge your allegiance to one of the teams in the Big 12 this season.

Now, there are two ways you can find your team by geography or mascot. Which team is closest to where you live or which team has the same or closest mascot to you?

For example, if you are an Arizona Wildcat fan, you could cheer for Texas Tech (closest) or Kansas State (same mascot).

Utah fans could cheer for another home state team in independent BYU.

Where are the explosive running back and solid defense fans?

While yes, it will be very painful to even think of cheering for a team other than Michigan or Ohio State, we know you can do it.

Now, there are two ways you can find your team by geography or mascot. Which team is closest to where you live or which team has the same or closest mascot to you?

Ohio State fans, no one has the same mascot as you, so by geography alone there are three choices: The University of Kentucky in the SEC or Pittsburgh University and Louisville University in the ACC.

Here is where color comes in. Since OSU is red, go with Louisville.

Michigan and Michigan State fans have the same issue. Both could cheer for Norte Dame, who is partnering up with the ACC, or Spartan fans could cheer for Florida State, since their mascots have similar vibes.

Now adding the SEC to this one is more about geography than playing style, but the SEC does tend to play a lot of the Sun Belt teams in normal times, so figured we'd give our Mountain West friends the option.

This one is a little hairier in terms of geography, but with almost no teams playing in the west, it is what it is.

If you are a Colorado State fan, unfortunately there are no Rams in the SEC or Sun Belt, so the team to cheer for would be Texas State or Missouri by geography. UNLV Rebel fans could pull for Ole Miss who has the same mascot.

These teams are used to sparring all the time, especially in bowl games, so it won't be that difficult to pick who you want to cheer for.

Ohio University Bobcat fans can keep it in their home state by cheering for Cincinnati or head next door to West Virginia and give it all to the Thundering Herd from Marshall.

Northern Illinois University could also pull for Cincinnati in terms of geography, but if you want to keep it in the mascot family, UConn would be the best match.

No matter who you cheer for, we can all agree that it's good to have college sports back.