Where to go this summer: 11 top destinations 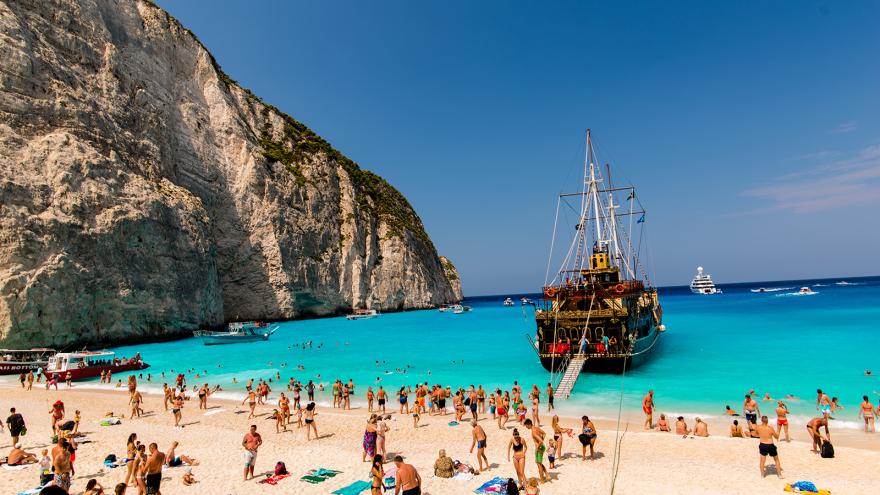 (CNN) -- It's looking like this summer will be a travel season to remember, especially following the Covid-stricken summers of 2020 and 2021.

"Not only are we seeing exponential travel enthusiasm, we are also anticipating some amazing new summer experiences, events and offerings," said Carole-Anne Hughs Wood, director of marketing for Embark Beyond, a New York-based luxury travel agency.

New York, Disney World and the United Kingdom, which is celebrating Queen Elizabeth II's Platinum Jubilee, all have great things going on.

"The excitement this summer to get out and experience the world, both near and far from home, certainly feels unprecedented," she added.

Andrew Steinberg, a luxury travel agent affiliated with Ovation Travel Group, said summer travel bookings are like "the floodgates have opened. People have been trapped inside for a long time, they've been watching things online. Netflix subscription numbers are down now -- people want experiences, to touch and feel real life again."

Here are some of the many experiences in destinations around the world that can offer the joy of travel again this summer:

While it's winter Down Under, the northern part of Australia has weather temperate enough for outdoor activities.

Destinations like Cairns, the gateway to Queensland's tropical north; the seaside village of Port Douglas; and Hamilton Island will be mild enough to swim and to experience the Great Barrier Reef and Daintree Rainforest. Another must-see here: The Whitsundays, an archipelago of 74 tropical islands off the Queensland coast, next to the reef.

Uluru-Kata Tjuta National Park, where the great, red sandstone monolith formerly known as Ayers Rock is located, is also a great spot this time of year.

One of the world's smallest and most densely populated countries, Singapore is made up of one main island and over 60 smaller ones off the coast of the Malay Peninsula.

Don't let its size deter you -- myriad activities await. The city is home to the island of Pulau Ubin, where diverse habitats and a variety of wildlife can be explored; and the Southern Ridges, a 6.2-mile stretch of green open spaces that span the hills of Singapore's most popular parks and gardens.

Wellness treatments and massages can be found at the Deverana Spa at the Dusit Thani Laguna Singapore Hotel.

A holy land for many of the world's religions, Israel offers many fascinating attractions.

These include the beachfront resort of Eilat, on the Red Sea; the Dead Sea; and the mountain fortress of Masada, stronghold of the Jews in their war against the Romans.

Other must-sees in this small country, approximately the same size as the state of New Jersey, are the holy city of Jerusalem; Tel Aviv, a bustling, cosmopolitan, Mediterranean city; and the Sea of Galilee, the site of the New Testament bible story of Jesus walking on water.

Israel is famous for its plentiful breakfasts featuring everything from vegetable salads, hummus, cheeses and fish to eggs, breads and pastries.

And for an especially wide variety of cuisines, there's Tel Aviv, a melting pot of immigrants from dozens of countries. The five-star David Kempinski Tel Aviv, a new beachfront hotel that opened on the city's boardwalk this spring, is getting rave reviews.

With few restrictions and an increasing number of direct flights to Greece from the US, this country, and particularly its islands, are especially attractive this summer.

Santorini and Mykonos often top travel bucket lists, while Crete, the largest Greek island, can be paired with either. Some of the most stunning Greek beaches are located in Zakynthos, while back on the mainland, the Peloponnese Peninsula is famous for its ancient ruins and modern-day wineries.

New hotels in Mykonos worth checking out include the Kalesma Mykonos and the Cali Mykonos, which is set to open in July. Katy Link, a Greece travel specialist at Embark Beyond, warns travelers to be wary of hotels here being sold on fake websites.

This always-popular European country is offering a wide variety of attractions and adventures this summer outside the capital of Paris. Opening next month in Marseille will be Cosquer Mediterranée, a full-scale replica of the prehistoric Cosquer cave, decorated with paintings and engravings.

The celebration of the Platinum Jubilee of Queen Elizabeth II, which began in February, continues through the early fall. Special events on June 2 will include the Queen's Birthday Parade in London and the lighting of beacons at Buckingham Palace and throughout the UK.

The Tower of London is planting a colorful field of millions of flowers, the first permanent transformation of its moat into a new natural landscape. There also will be special exhibitions of portraits of the queen, her Coronation Dress and Robe of Estate, and outfits she worn to celebrate her Silver, Golden and Diamond Jubilees, at, respectively, Buckingham Palace, Windsor Castle and the Palace of Holyroodhouse in Edinburgh.

Objects showcasing the queen's love for animals and the great outdoors also will be on display at her country house of Sandringham.

The most famous of this Central American country's attractions is, of course, the Panama Canal, considered one of the seven wonders of the modern world and built in the early 20th century to decrease travel time for ships between the Pacific Ocean and Caribbean Sea.

Nearby, the old quarter of Panama City, Casco Viejo, dates back to 1673 and is a UNESCO World Heritage Site.

Nature lovers will enjoy Baru Volcano National Park in the province of Chiriqui. The volcano is the 12th highest peak in Central America and touted as the only place in the world where, on a clear day, you can see the Atlantic and Pacific Oceans at the same time.

And at Coiba National Park, off the Pacific Coast in the Gulf of Chiriqui, visitors can find tremendous biological diversity, as well as world-class diving. They may want to stay overnight here at Islas Secas, a private-island eco-resort.

Great Lakes itineraries, sailing from Thunder Bay, Ontario, to Milwaukee, still available for booking as of press time will sail in late May and late June and in early and mid-September.

This legendary destination -- which will continue its 50th anniversary celebration that began last October through March 2023 -- is offering several new attractions.

The Star Wars: Galactic Starcruiser is billed as a two-night, immersive adventure where travelers can live "a bespoke experience and journey further into a Star Wars adventure" than they ever dreamed possible.

After arriving at the Walt Disney World Resort terminal, they will board a launch pod and rendezvous with the 100-cabin Halcyon starcruiser, where they can interact with characters and dine on exotic galactic cuisine. Travelers can also wield a lightsaber; explore the ship's bridge, systems and controls; visit its engineering room; and take an exclusive transport to the planet Batuu.

As always, the Big Apple is welcoming visitors with new hotels. Opening in midtown Manhattan last month was the Hard Rock Hotel New York on West 48th Street, which pays homage to the recording studios and music stores that once lined this street by offering live music across all public spaces.

It also offers a bar and lounge on the 34th floor; a New York Yankee-themed steakhouse; a Rock Shop; and guest-curated playlists.

Also in midtown, on Fifth Avenue and 57th Street, will be the luxurious Aman New York, opening August 2, an 83-suite hotel in the iconic Crown Building. This will feature Italian and Japanese restaurants; a wine library; garden terrace; jazz club with live performances; and a 24,800-square-foot spa with a 65-foot, indoor swimming pool.

Also slated to open in August is the Hotel Barrière Fouquet's New York, which will blend "Parisian panache with Tribeca cool." The property will feature 97 rooms and suites with French Art-Deco inspired design; an outpost of the historic French brasserie Fouquet's; a spa; rooftop terrace and Cannes screening room.

And the Wall Street Hotel, a boutique luxury hotel, will open next month, housed in the early 20th-century Beaux Arts Tontine building.

Among its festivals will be the Festival Go Velo, for cyclists; the three-week-long Montreal Fringe Festival; the MURAL festival for international graffiti artists; a fireworks festival with participation by six world-class pyrotechnic companies; a jazz festival; an outdoor circus performer festival; Montreal Pride; and a fashion and design festival.

It's also a city that swears by its bagels, so visitors will want to leave time open in their busy festival schedule to sample these. Top purveyors include rival bagel makers St-Viateur Bagel and Fairmount Bagel.