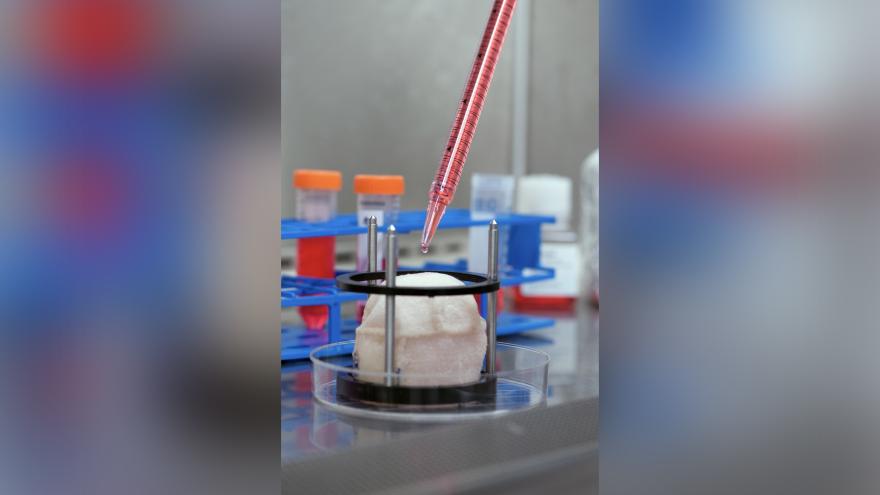 (CNN) -- What if doctors could just print a kidney, using cells from the patient, instead of having to find a donor match and hope the patient's body doesn't reject the transplanted kidney?

The soonest that could happen is in a decade, thanks to 3D organ bioprinting, said Jennifer Lewis, a professor at Harvard University's Wyss Institute for Biologically Inspired Engineering. Organ bioprinting is the use of 3D-printing technologies to assemble multiple cell types, growth factors and biomaterials in a layer-by-layer fashion to produce bioartificial organs that ideally imitate their natural counterparts, according to a 2019 study.

This type of regenerative medicine is in the development stage, and the driving force behind this innovation is "real human need," Lewis said.

In the United States, there are 106,075 men, women and children on the national organ transplant waiting list as of June 10, according to the Health Resources & Services Administration. However, living donors provide only around 6,000 organs per year on average, and there are about 8,000 deceased donors annually who each provide 3.5 organs on average.

The cause of this discrepancy is "a combination of people who undergo catastrophic health events, but their organs aren't high enough quality to donate, or they're not on the organ donor list to begin with, and the fact that it's actually very difficult to find a good match" so the patient's body doesn't reject the transplanted organ, Lewis said.

And even though living donors are an option, "to do surgery on someone who doesn't need it" is a big risk, said Dr. Anthony Atala, director of the Wake Forest Institute for Regenerative Medicine. "So, living related donors are usually not the preferred way to go because then you're taking an organ away from somebody else who may need it, especially now as we age longer."

Atala and his colleagues were responsible for growing human bladders in a lab by hand in 2006, and implanting a complicated internal organ into people for the first time -- saving the lives of three children in whom they implanted the bladders.

Every day, 17 people die waiting for an organ transplant, according to the Health Resources & Services Administration. And every nine minutes, another person is added to the waitlist, the agency says. More than 90% of the people on the transplant list in 2021 needed a kidney.

"About a million people worldwide are in need of a kidney. So they have end-stage renal failure, and they have to go on dialysis," Lewis said. "Once you go on dialysis, you have essentially five years to live, and every year, your mortality rate increases by 15%. Dialysis is very hard on your body. So this is really motivating to take on this grand challenge of printing organs."

"Anti-hypertensive pills are not scarce. Everybody who needs them can get them," Martine Rothblatt, CEO and chairman of United Therapeutics, said at the Life Itself conference, a health and wellness event presented in partnership with CNN. United Therapeutics is one of the conference's sponsors.

"There is no practical reason why anybody who needs a kidney -- or a lung, a heart, a liver -- should not be able to get one," she added. "We're using technology to solve this problem."

To begin the process of bioprinting an organ, doctors typically start with a patient's own cells. They take a small needle biopsy of an organ or do a minimally invasive surgical procedure that removes a small piece of tissue, "less than half the size of a postage stamp," Atala said. "By taking this small piece of tissue, we are able to tease cells apart (and) we grow and expand the cells outside the body."

This growth happens inside a sterile incubator or bioreactor, a pressurized stainless steel vessel that helps the cells stay fed with nutrients -- called "media" -- the doctors feed them every 24 hours, since cells have their own metabolism, Lewis said. Each cell type has a different media, and the incubator or bioreactor acts as an oven-like device mimicking the internal temperature and oxygenation of the human body, Atala said.

"Then we mix it with this gel, which is like a glue," Atala said. "Every organ in your body has the cells and the glue that holds it together. Basically, that's also called 'extracellular matrix.' "

This glue is Atala's nickname for bioink, a printable mixture of living cells, water-rich molecules called hydrogels, and the media and growth factors that help the cells continue to proliferate and differentiate, Lewis said. The hydrogels mimic the human body's extracellular matrix, which contains substances including proteins, collagen and hyaluronic acid.

The non-cell sample portion of the glue can be made in a lab, and "is going to have the same properties of the tissue you're trying to replace," Atala said.

The biomaterials used typically have to be nontoxic, biodegradable and biocompatible to avoid a negative immune response, Lewis said. Collagen and gelatin are two of the most common biomaterials used for bioprinting tissues or organs.

From there, doctors load each bioink -- depending on how many cell types they're wanting to print -- into a printing chamber, "using a printhead and nozzle to extrude an ink and build the material up layer by layer," Lewis said. Creating tissue with personalized properties is enabled by printers being programmed with a patient's imaging data from X-rays or scans, Atala said.

"With a color printer you have several different cartridges, and each cartridge is printing a different color, and you come up with your (final) color," Atala added. Bioprinting is the same; you're just using cells instead of traditional inks.

How long the printing process takes depends on several factors, including the organ or tissue being printed, the fineness of the resolution and the number of printheads needed, Lewis said. But it typically lasts a few to several hours. The time from the biopsy to the implantation is about four to six weeks, Atala said.

The ultimate challenge is "getting the organs to actually function as they should," so accomplishing that "is the holy grail," Lewis said.

"Just like if you were to harvest an organ from a donor, you have to immediately get that organ into a bioreactor and start perfusing it or the cells die," she added. To perfuse an organ is to supply it with fluid, usually blood or a blood substitute, by circulating it through blood vessels or other channels.

Depending on the organ's complexity, there is sometimes a need to mature the tissue further in a bioreactor or further drive connections, Lewis said. "There's just a number of plumbing issues and challenges that have to be done in order to make that printed organ actually function like a human organ would in vivo (meaning in the body). And honestly, this has not been fully solved yet."

Once a bioprinted organ is implanted into a patient, it will naturally degrade over time -- which is OK since that's how it's designed to work.

"You're probably wondering, 'Well, then what happens to the tissue? Will it fall apart?' Actually, no," Atala said. "These glues dissolve, and the cells sense that the bridge is giving way; they sense that they don't have a firm footing anymore. So cells do what they do in your very own body, which is to create their own bridge and create their own glue."

Atala and Lewis are conservative in their estimates about the number of years remaining before fully functioning bioprinted organs can be implanted into humans.

"The field's moving fast, but I mean, I think we're talking about a decade plus, even with all of the tremendous progress that's been made," Lewis said.

"I learned so many years ago never to predict because you'll always be wrong," Atala said. "There's so many factors in terms of manufacturing and the (US Food and Drug Administration regulation). At the end of the day, our interest, of course, is to make sure the technologies are safe for the patient above all."

Whenever bioprinting organs becomes an available option, affordability for patients and their caregivers shouldn't be an issue.

They'll be "accessible for sure," Atala said. "The costs associated with organ failures are very high. Just to keep a patient on dialysis is over a quarter of a million dollars per year, just to keep one patient on dialysis. So, it's a lot cheaper to create an organ that you can implant into the patient."

The average kidney transplant cost was $442,500 in 2020, according to research published by the American Society of Nephrology -- while 3D printers retail for around a few thousand dollars to upward of $100,000, depending on their complexity. But even though low-cost printers are available, pricey parts of bioprinting can include maintaining cell banks for patients, culturing cells and safely handling biological materials, Lewis said.

Some of the major costs of current organ transplantation are "harvesting the organ from the donor, the transport costs and then, of course, the surgery that the recipient goes through, and then all the care and monitoring," Lewis said. "Some of that cost would still be in play, even if it was bioprinted."