When he broke his leg at a National Park, strangers had to carry him to safety because of the government shutdown 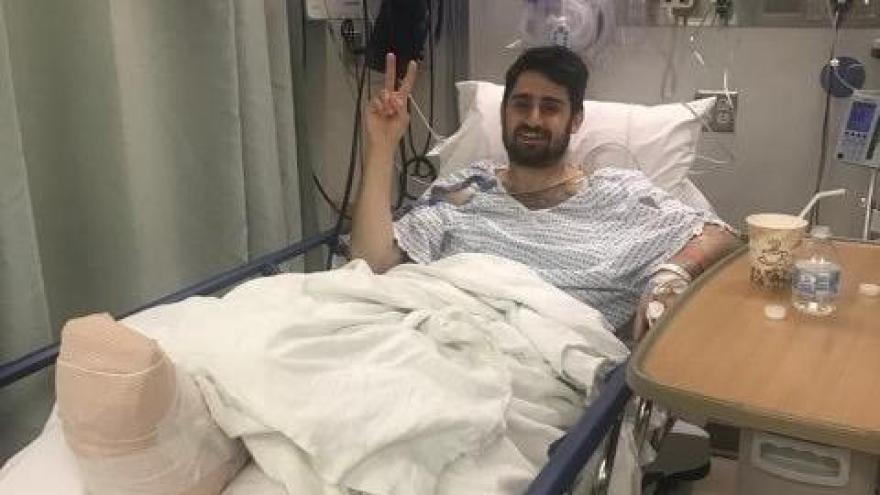 Josh Snider fell at Big Bend National Park on 12/24 and was rescued by a single park ranger and friends and visitors of the park as the rescue team had been furloughed, according to Snider.

(CNN) -- Josh Snider hoped the government shutdown would mean fewer crowds at Big Bend National Park during his Christmas Eve hike, even if it meant no visitor services or staff patrolling the Texas countryside.

Then, he fell and broke his leg about 1.5 miles into the trek. Suddenly, he needed help -- and people.

Fortunately, although rescue services were limited due to the shutdown, other people were close by, he said. A family of four, another hiker and a park ranger carried Snider out of Santa Elena Canyon to safety.

"It turned out to be one of the most beautiful moments ever," Snider said. "It was great to see everyone come together to help get me out of the canyon."

Unlike some previous government shutdowns, in which national parks closed entirely, gates have remained opened under the Trump administration, though parks are severely understaffed. CNN has reached out to Big Bend for comment on this incident.

Big Bend, which covers 1,252 square miles in southwest Texas, including the Chisos Mountains and a large swath of the Chihuahuan Desert, is open to the public. But no visitor services are available, and several campgrounds and trails are closed due to sanitation and resource impact concerns.

But the Santa Elena Canyon trailhead and trail were open when Snider visited with his friend. The pair had spent two nights camping in Big Bend and planned to return to Austin, where Snider lives, on Christmas Day.

Snider was climbing up a rock when he lost his footing and fell about 6 to 8 feet into the river below, said Snider's friend, Michael Bright, who was visiting Snider from San Francisco.

Initially, Bright said he was worried Snider might have lost the car keys in the river. Then, when Snider couldn't stand up, "It became apparent that he was seriously hurt and immobile," Bright said.

Both started worrying about how they would get out of the canyon.

"I knew it was going to be a lot harder of a journey out," Snider said. "I felt helpless and powerless and trapped."

Snider had made his way to the riverbank by the time Tom Fan passed by with his wife and teenage children. "It was obvious there was a problem," Fan said.

Fan said he used his wife's phone to call Big Bend's office. They dialed 1 for emergency services and were patched through to an operator.

Bright said he explained the situation and the operator told him that resources are limited because of the government shutdown. She offered to put out a call for a ranger, Bright said, but encouraged them to make their way to the trailhead because no medical assistance could be given on the trail.

Snider described the ranger as much smaller than he was, but "determined" to help, he said. "All he wanted to do was get me out of there safely. He kept cracking jokes and trying to keep things light," Snider recalled.

A team of emergency medical technicians met them at the trailhead and assessed him on the spot, he said. They sent him to Big Bend Medical Center in Alpine, about two hours away, where he was diagnosed with a fractured fibula and a torn ligament in his ankle.

On December 27, Snider flew to New York, where his family lives, and had surgery on his foot and ankle. He has been recovering and resting in his family's home in New Hyde Park since.

Snider said he is grateful his injuries were not serious. And he appreciates how everyone came together to help him out of the canyon. But he wishes the government would resolve the shutdown to avoid similar mishaps.

"I can only imagine what someone else might be going through right now who needs a service that they can't get."