When a woman's car broke down, these teens pushed it five miles to her home 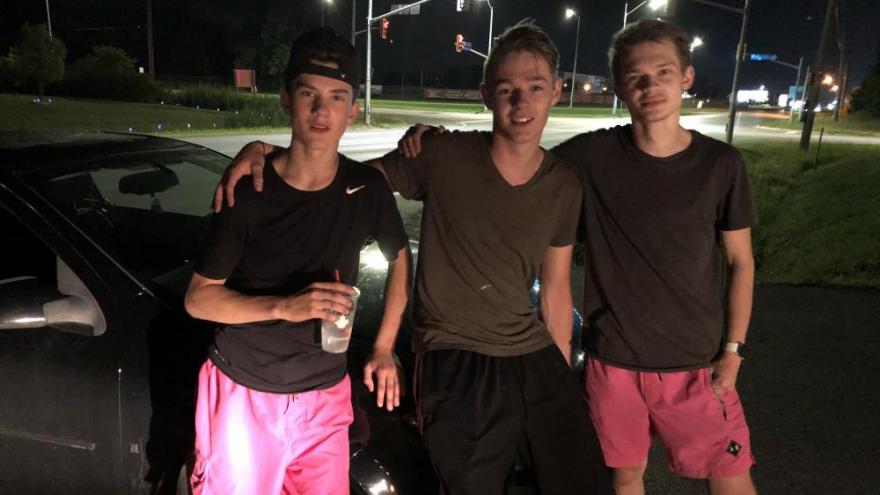 A late-night run to the donut shop turned into a roadside rescue for three teens living near Niagara Falls. It ended with them pushing a stranded stranger's car for hours and inspiring others on Facebook.

(CNN) -- A late-night run to the donut shop turned into a roadside rescue for three teens living near Niagara Falls. It ended with them pushing a stranded stranger's car for hours and inspiring others on Facebook.

Aeron McQuillin, 18, Bailey Campbell, 17, and Billy Tarbett, 15, were on their way to a Tim Hortons donut shop in Fonthill, Ontario, when they spotted a woman on the side of the road with smoke coming out of her car.

They quickly diagnosed the problem as a leak that allowed the engine coolant and oil to mix. They also determined the car was too dangerous to drive.

The driver couldn't afford a tow truck. So, Billy suggested that guys push the car. The woman lives more than five miles away.

Dan Morrison, who also stopped to help, tells CNN he and the driver thought the teens were crazy to offer.

Bailey told CNN they just wouldn't want to be stuck like that, so they insisted.

The trio grabbed bottles of water and a speaker so they could "jam out" and started their trek. Morrison drove behind them with his hazard lights on for safety.

Bailey says they faced several obstacles. The first was a big hill 300 yards from the start. Halfway through, they took a break and the battery died. They had to charge it just to get back into neutral.

After more than two-and-a-half hours of pushing, they finally delivered the car back home. Bailey described the motorist as both thankful and amazed. They exchanged hugs, and everyone went home for some much-needed rest. The trio never got the woman's full name.

Morrison snapped a couple of pictures of the teens, hoping to turn them into hometown heroes on social media. His Facebook post went viral, with positive comments coming in from as far away as Australia.

On Facebook, Aeron wrote, "Our phones [were] blowing up with messages and Facebook notifications from total strangers, showing their appreciation and gratitude for our random act of kindness." He went on to say, "We hope more people can learn from this situation and not be afraid to lend a helping hand to those in need."

Bailey described his moment of viral fame as "overwhelming in a good way."

Morrison said, "There is so much negativity in the world; people want something positive. When something like this happens, it becomes contagious... Everyone has had car problems and can relate."