When a Waffle House was short on staff, customers jumped behind the counter to help out 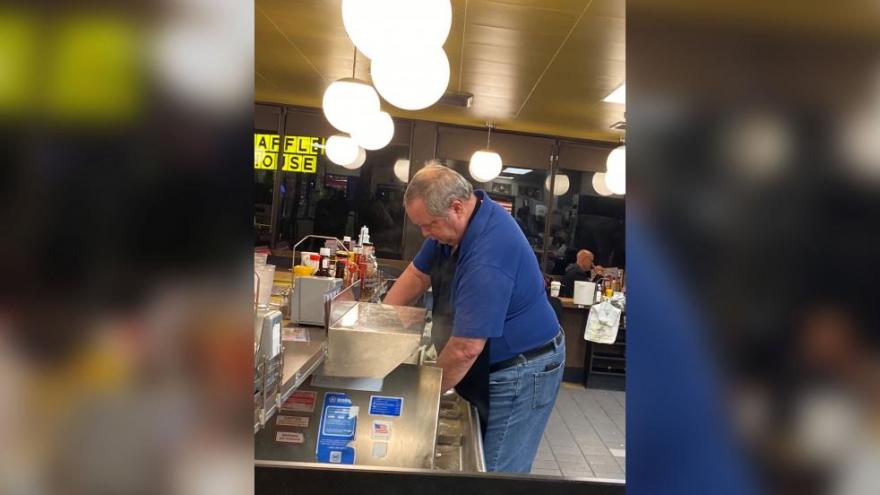 Ethan Crispo never got the man's name, but this man stepped in to serve behind the counter when an Alabama Waffle House had a staff shortage.

(CNN) -- Late last Saturday night, Ethan Crispo had just left a friend's birthday party in Birmingham, Alabama, and walked into a Waffle House around midnight to grab a bite.

Crispo told CNN only a single employee was working in the restaurant.

He described the cook's face, as "awash in bewilderment," at finding he was by himself managing the night shift.

More than 30 people were there eating, and there was just one man left to "fend off the incoming crowd of hungry, heavily imbibed customers," Crispo said.

He became resigned to going home on an empty stomach.

But a customer finished his meal, asked for an apron and stepped behind the counter to wash dishes.

"It was a smooth transition," Crispo, 24, said. "He just busted his butt and helped out."

'It was one of my most memorable experiences'

Crispo said he asked Ben, the lone associate working, who the man washing dishes was.

Turns out he didn't work at the restaurant, nor did he work at a Waffle House anywhere.

Another woman, wearing a dress and heels, also stepped up. She walked behind the counter to get a coffee pot.

"At first I thought it was out of necessity, like she just wanted coffee," Crispo said. But she was enlisting as a second member of the volunteer staff.

The two worked together in a team, busing tables, stacking cups and washing dishes. Meanwhile, Ben, the actual employee, manned the cash register and cooked at the grill.

The man washing dishes occasionally "had to ask Ben where stuff should go," Crispo said, but otherwise it was as though though two strangers, without even talking to each other, had spontaneously learned to run a restaurant in tandem.

Pat Warner, a spokesman for Waffle House, told CNN the store had a miscommunication about the duty roster that night, and it had created "a little gap" in staffing.

"We're very appreciative and thankful, but we do prefer to have our associates behind the counter," Warner said.

He added that Waffle House restaurants tend to have a special sense of community. He recalled a similar time in 2014 when diners volunteered to keep a restaurant running when paid staff couldn't get to work during Atlanta's notorious Snowmageddon storm.

But, for Crispo it was the first time, and it'll stick out to him for years to come, as an example of humanity at its best.

"I've never seen anything like this ever happen, nor will I again, probably," Crispo said. "It was one of my most memorable experiences."