When a rescue group asked for help caring for baby birds, thousands responded with hand-knitted nests 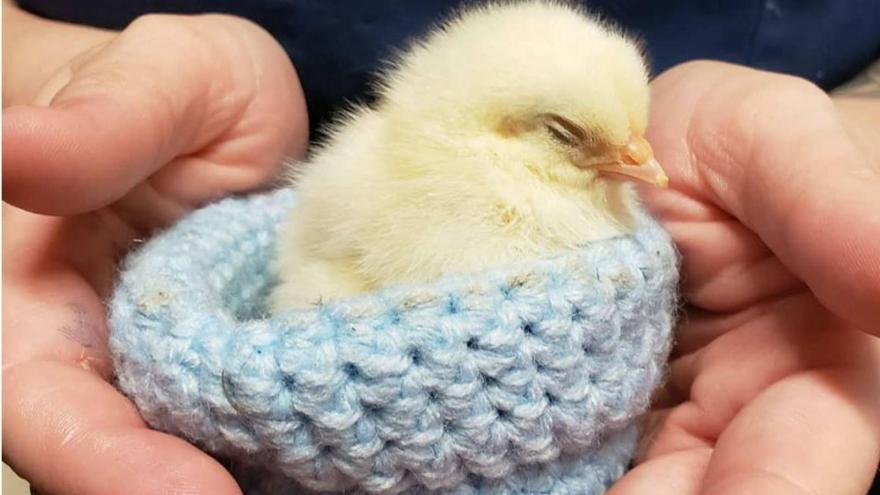 A chick sleeps comfortably in a homemade nest.

(CNN) -- Spring is the busiest time of year at the Carolina Waterfowl Rescue in Indian Trail, North Carolina. With warmer weather comes a new crop of baby birds, and, unfortunately, a new crop of everyday disasters for them to weather.

Nests fall, predators strike, a chick is left behind by its mother, and one way or another several thousand hatchlings end up in the center's care every year.

Last month, the staff put out a simple request on its Facebook page for knitted nests to accommodate the roughly 3,000 baby birds that are expected to come to the sanctuary this season.

The center has posted the request before, but for some reason, its latest attempt caught on. Since that fateful post, the organization has received thousands of little knitted nests from all over the world.

And you know what? They love it.

"It's been an amazing community outreach activity," founder and director Jennifer Gordon tells CNN. "People really enjoy doing them, and we get all of these notes with these wonderful stories along with the nests."

Gordon estimates the center's gotten thousands of the little nests, from as far away as Canada and Japan.

In fact, she says a man in Japan actually started a knitting group so they could send in a collection of them. The center's nest supply has gotten so large, the staff has had to dedicate part of a storage unit to organize them.

However, that doesn't mean it wants people to stop.

"We're finding homes for them. We started a program where we're actually distributing the nests to other organizations," says Gordon. "Other rescues that help other kinds of animals can put them to use; newborn kittens are using them, possums are using them for pouches."

Aside from the fact that they are unbearably precious, the knitted nests actually provide critical support for fragile young bird bodies.

"Part of the function of the nest is to contain the babies so they can grow properly," Gordon says. "Anything that's born from an egg will have soft bones. In a bird, the way that their body is structured, the nest puts their body in the position to support the legs. The legs have to be tucked under. If a baby bird is left on the ground, its legs sort of splay outward and that can cause problems."

Not to mention, the nests provide warmth, and the bigger ones give an opportunity for different orphaned chicks to snuggle together in one little foster family.

All in all, the project provides some warm fuzzy feelings for all involved. The birds get a nice place to grow up, donors get a nice project to help share their love of animals, and the staff at the center gets to soak up some of the good vibes.

Good vibes, says Gordon, are sometimes sorely needed. Caring for 3,000+ baby birds (not to mention the other 1,000 or so animals at the rescue) can be a stressful, all-consuming job. Plus, it's not all cute chicks and nest naps. The rescue can get hundreds of calls a day from around the state asking for assistance with small animals. Sometimes callers don't understand the sheer demand for the rescue's services, and they can get rude, short or downright mean.

"The nests, and the messages of support people send with them, have been a really big boost for our staff," Gordon says.

She also thinks the simple, meditative act of creating something by hand to help a vulnerable little animal is a soothing prospect for people in an age of technology and aggression.

"People have messaged me and said they were going to take up knitting just to donate something," she says. "People don't do things like knit and crochet anymore, so it can take you back to your roots, so to speak. And people always tell us they want to do something to help, but don't know what to do. This is something they feel good doing."

For the record, if you're in the area, Gordon says the rescue could really use some more volunteers, as well. Baby birds eat about once every 15 minutes, and as you can imagine, by the time you feed a few thousand of them it's time to start all over again.

An endless loop of baby bird feedings sounds like a pretty nice way to spend the day, but Gordon says some people take a little coaxing before they're comfortable.

"Some people are really timid about feeding them," she says, "But other volunteers tell me that this is their happy place where they come every week to relax and do something good."

Plus, you'd get to see all of those little knitted nests firsthand. Who would want to miss out on that?