When a man heard that farmers were destroying unsold produce, he arranged for trucks to deliver tons of it to food banks 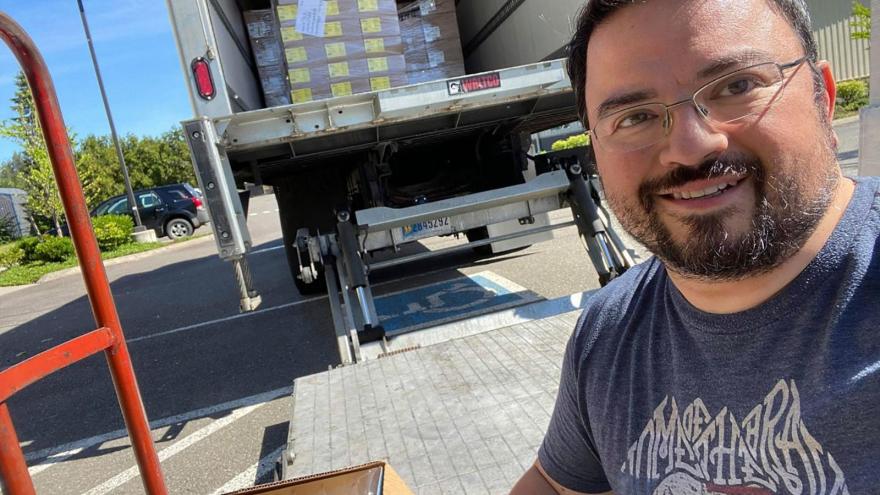 George Ahearn works on a delivery of eggs.

(CNN) -- George Ahearn, who grew up in the farming town of Othello, Washington, co-founded EastWest Food Rescue after learning that Covid-19 was costing local farmers so much business that they were willing to destroy their crops.

His non-profit has since moved nearly eight million pounds of produce from farms in eastern Washington to the western part of the state for distribution to hundreds of food banks and meal programs.

"I know these people that I grew up with on one hand, and on the other hand I know there is a need here," Ahearn, 45, told CNN. "I'm just going to connect the two dots."

He started by calling food banks that were interested in taking some of the produce that would otherwise go to waste. But when he called the farmers, they wanted to give him truck loads of potatoes and onions -- way more than Ahearn's car could handle.

He also had another problem: Food banks needed the potatoes and onions to be cleaned and bagged before donation.

"What I didn't realize was the logistical nightmare, because I thought I could just show up with potatoes harvested straight from the ground and give them right to the food bank," said Ahearn, who also runs a nursing business. "I couldn't believe it."

So Ahearn asked for help via Facebook. That's how he connected with his two co-founders, Nancy Balin and Zsofia Pasztor. While Balin helped organize convoys to drive across Washington to pick up the produce, Pasztor assembled volunteers to clean and bag the food. It was then distributed through connections at her other non-profit, Farmer Frog.

A week after they started, they hauled more than 60 tons of produce across the state and handed it to food banks.

After two convoys and some 70 tons of donated food, Ahearn thought they had accomplished their mission. But his co-founders pointed out that the food was going fast, and their job was just getting started.

"That's 140,000 pounds," Ahearn said. "Surely we have flooded the market, and we should be proud of ourselves, and that's it. Three days later and there was not a potato or onion here. I realized that we need to do this again, and we got to do this for months."

EastWest Food Rescue depends on food donations, but they also raise money to pay the farmers. They can't match the market rates for the food, but Ahearn says they try to negotiate.

As word spread, so did help from the community. A bus company offered a vehicle they used to carry onions. A local Honda dealership offered the use of a new car. And two counties offered dump trucks that carried tons of produce.

Since May, EastWest Food Rescue's operations have grown, and it now coordinates food deliveries beyond Washington and across the western United States.

The company recently expanded its mission by responding to the wildfires and sending non-perishable foods to hard hit areas of eastern Washington.

Ahearn has a message for anyone who wants to make their community a better place.

"I have seen minutes of effort move thousands, and thousands of pounds (of food)," he said. "Just figure out what you are passionate about and what you could get involved in."