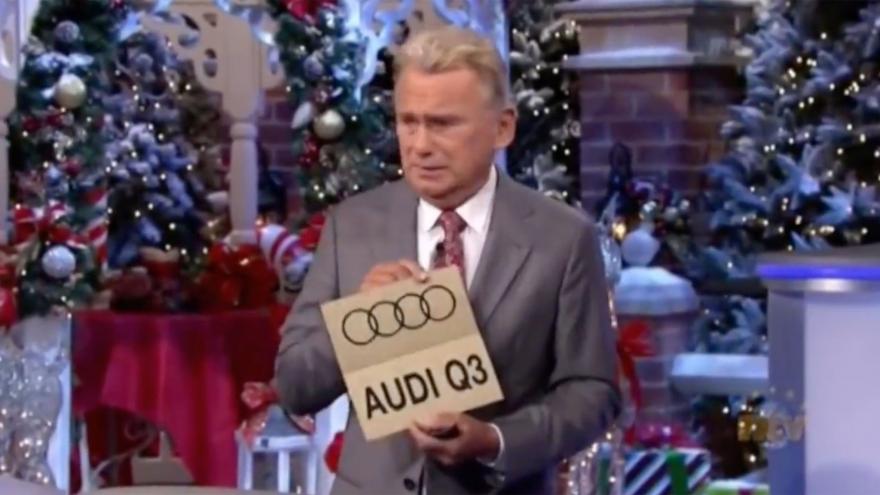 (CNN) -- After a "Wheel of Fortune" contestant lost out on a new Audi due to a technicality -- even though she answered the puzzle correctly -- the car company said it would gift her the vehicle instead.

Within a few days of her appearance on the long-running game show, Audi located competitor Charlene Rubush and said it would give her the same model of car she'd been denied on the show.

In a recent holiday episode of "Wheel of Fortune," Rubush had made it to the bonus round with just 10 seconds to fill in the missing letters of a puzzle, themed "What are you doing?" After first guessing, "Choosing the right card," she tried again -- "Choosing the right ... word!"

Rubush answered correctly, but she paused for a few seconds between "right" and "word."

"You know, this one's tough because you said all the right words, including the word 'word,' but as you know, it's gotta be more or less continuous," host Pat Sajak told Rubush, a hint of disappointment in his voice. "We'll allow for a little pause, but not four or five seconds.

"I'm sorry," he continued. "You did a good job of getting it, but we can't give you the prize, and it was the Audi."

A clip of the moment Rubush lost out on the Audi due to a technicality was shared widely on Twitter, including by former "Jeopardy" winner Alex Jacob.

"Come on @WheelofFortune, the woman literally chose the right word," he tweeted. "Give her the car."

His plea and those of other "Wheel of Fortune" viewers gained traction, and Jacob shared that he'd messaged Audi to ask for their help. Several hours later, Audi tweeted that Rubush was "a winner in our eyes" and would award her the Q3.

Tara Rush, Audi of America Chief Marketing Officer, said the company was "thrilled to gift Charlene" in a statement to CNN.

"It is the season of giving after all and, technicality or not, we are always eager to share a bit of Audi magic and cheer!" Rush said in the statement.

"Wheel of Fortune" did not immediately responded to CNN's requests for comment.

The hubbub over Rubush's loss is at least the second time this year "Wheel of Fortune" would-be winners' chances were tanked by a technicality. In April, a contestant used the word "and" in his final answer despite answering the puzzle correctly. Suffice to say, fans were very unhappy -- but that contestant was not later awarded a car for his troubles.