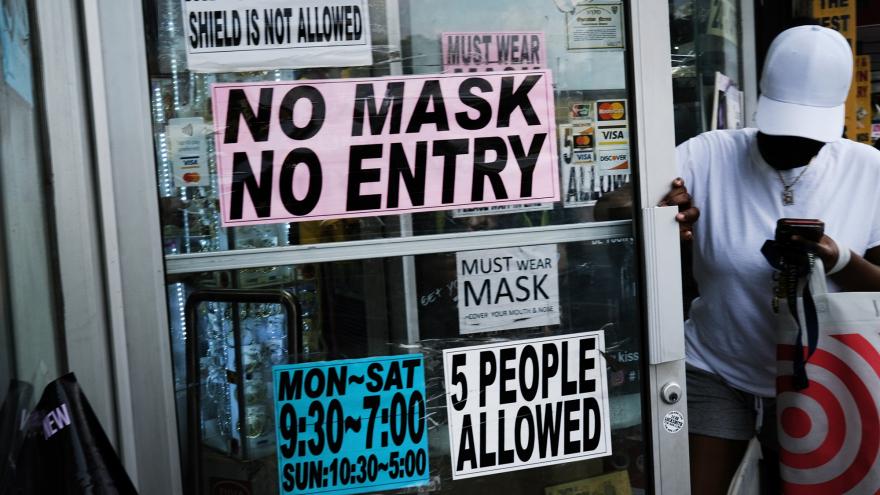 (CNN) -- The US has done an about-face on its approach to the coronavirus pandemic this week. Masks are back, vaccine mandates are looming, and officials are sounding more worried than they have in months.

President Joe Biden said Thursday that every federal government employee or contractor would be asked to say whether they are vaccinated, and those who are not must wear a mask on the job, keep their distance from others and submit to a virus test at least once a week.

Driving this are two things: The large number of Americans who remain unvaccinated, and the rapid spread of the Delta variant.

Here's what's known so far about the variant.

What the Delta variant is

The Delta variant, originally known as B.1.617.2, has been around since late last year but in recent months it has become speedily dominant in many countries. It accounts for more than 80% of newly diagnosed cases in the US, according to the US Centers for Disease Control and Prevention.

"COVID-19 cases have increased over 300% nationally from June 19 to July 23, 2021, along with parallel increases in hospitalizations and deaths driven by the highly transmissible B.1.617.2 (Delta) variant," the US Centers for Disease Control and Prevention said in a Health Alert Network advisory this week.

The Delta variant is more transmissible

How much more is not really clear. Estimates range from 60% moreto more than 200% more, depending on who is doing the estimates.

It's a difficult number to check, because figuring that out would require much more testing than is being done now. People who test positive would have to submit samples for genomic sequencing, and that's only done in a few places in the US.

And to compare its transmissibility to past variants would require that kind of testing to have been done in past months -- and that simply was not done.

So everything relies on estimates.

British infectious disease modelers, a group known as the Scientific Pandemic Influenza Group on Modelling, Operational sub-group, say the data indicate the Delta is 40-60% more transmissible than the B.1.1.7 or Alpha variant, which was once the dominant strain in the US but which has been replaced by Delta. They say it's almost twice as transmissible as the original strains of the virus first seen in China.

Delta may cause more serious disease

Hospital emergency rooms and intensive care units are filling up with patients again in parts of the US. It may look like the Delta variant is making people sicker, but more than 90% of people showing up for treatment are unvaccinated.

So while people may be more likely to become infected in the first place with Delta if they are unvaccinated, there's no hard data yet showing that Delta causes more serious disease.

The CDC cites three older studies, from Canada, Singapore and Scotland, indicating people infected with Delta end up in the hospital more often.

What is also happening is that younger people are making up a larger share of those getting sick. More than 80% of Americans over 65 are fully vaccinated, according to the CDC. But younger Americans are not vaccinated at the same rate, so they're the ones showing up in ERs.

It does not seem to evade vaccine protection

This one may be up in the air still, but early studies indicate that fully vaccinated people should be as unlikely to become seriously ill with Covid-19 caused by Delta as with any other variant.

"Available evidence suggests the currently authorized mRNA COVID-19 vaccines (Pfizer-BioNTech and Moderna) are highly effective against hospitalization and death for a variety of strains, including Alpha (B.1.1.7), Beta (B.1.351), Gamma (P.1), and Delta (B.1.617.2)," the CDC says.

A CDC presentation made to Walensky this week, however, raises the possibility that vaccines may be somewhat less effective against Delta.

"Vaccines prevent more than 90% of severe disease, but may be less effective at preventing infection or transmission," it reads. "Therefore, more breakthrough and more community spread despite vaccination."

The World Health Organization has been reassuring so far.

"In terms of just looking at the prevention of severe disease and hospitalization, they're all very good, over 90% effective," Dr. Soumya Swaminathan, WHO's chief scientist said in a briefing this month. "All of the WHO emergency use listed vaccines do protect against developing severe disease, hospitalization and death due to the Delta variant."

Tests done in lab dishes indicate the immune response generated by vaccines should be, in theory, strong and broad enough to cover Delta.

Harvard Medical School researcher Dr. Dan Barouch and colleagues studied blood taken from eight vaccinated volunteers and tested it against an engineered version of the spike protein of Delta.

"A single dose of the Johnson & Johnson COVID-19 vaccine generated neutralizing antibodies against a range of SARS-CoV-2 variants of concern, which increased over time, including against the increasingly prevalent and more transmissible Delta (B.1.617.2) variant, the partially neutralization-resistant Beta (B.1.351), the Gamma (P.1) variants and others, including the Alpha (B.1.1.7), Epsilon (B.1.429), Kappa (B.1.617.1) and D614G variants, as well as the original SARS-CoV-2 strain," the company said.

It may be more infectious in breakthrough cases than past strains

No vaccine is 100% effective, and many thousands of people who are fully vaccinated have nonetheless become infected -- something known as a breakthrough case.

While the CDC originally told people that the vaccinated are less likely to infect others, CDC's Walensky said this week the Delta variant may be different. She's promised to release more data about this soon.

But recent findings, she said, persuaded her to change guidance for the fully vaccinated.

The CDC presentation cited three studies that it said showed Delta infections were associated with higher viral load -- meaning people had more virus in their bodies -- and longer duration of shedding, meaning they spread it for longer.

Because of this and other evidence, the CDC said even vaccinated people should wear masks in areas of sustained or high transmission. It's because vaccinated people may get exposed and then may have enough virus growing in their bodies to infect someone else, even if they don't have symptoms.

A lot of what is known comes from one study done by researchers in China.

Jing Lu of the Guangdong Provincial Center for Disease Control and Prevention and colleagues also said the virus transmitted more quickly -- in four days, compared to six days at the beginning of the pandemic.

People who make back-of-the-envelope statements about Delta's properties are often referring to this single study. For instance, New York University infectious disease specialist Dr. Celine Gounder created a stir when she said people could be infected by Delta in just one second of exposure, compared to 15 minutes at the beginning of the pandemic.

This wasn't based on scientific observations. Gounder was extrapolating from Lu's study, she explained on Twitter.

It has some unique mutations

The Delta strain has a constellation of mutations that mark it.

Delta has at least three mutations on a structure that is called the receptor binding domain -- the part of the virus that directly docks into the human cells it infects. They may help it escape detection by the immune system and at least one of them may help it bind more tightly to cells.

Another mutation in a place known as the furin cleavage site -- it's on the characteristic spike protein -- might also help make the virus infect cells more easily, according to the American Society of Microbiology.

"The mutation is thought to increase viral infectivity and transmissibility; however, research indicates that it must occur on the background of additional spike protein mutations in order to be consequential," the ASM says.

It doesn't have some of the mutations that made other variants more transmissible, including one called N501Y that characterizes the Alpha or B.1.1.7 variant; the Beta or B.1.351 variant; and the Gamma or P1 variant. It also lacks a mutation called E484K seen in Beta and Gamma.

The answer to the spread, infectious disease experts universally say, is more vaccination. "If we have more and more people vaccinated, we will win in this race," Walensky said this week.