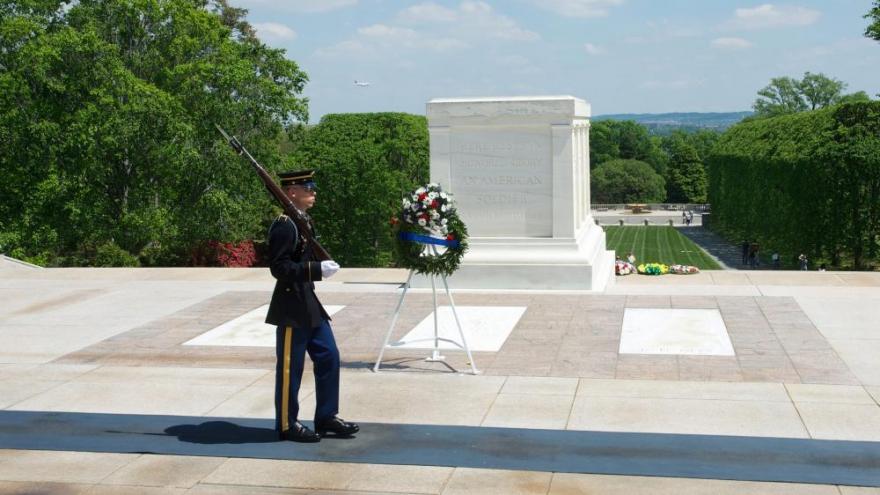 View of a uniformed guard at the Tomb of the Unknown Soldier at Arlington National Cemetery, Arlington, Virginia, April 20, 2012.

(CNN) -- The Tomb of the Unknown Soldier is at Arlington National Cemetery. It stands on the top of a hill overlooking Washington DC. Congress approved the burial of an unidentified World War I soldier in the plaza of the then-new Memorial Amphitheater in 1921.

The white marble sarcophagus has three Greek figures sculpted on the side representing Peace, Victory, and Valor. There are also six wreaths, three sculpted on each side, that represent the six major campaigns of World War I. On the back on the tomb, there is an inscription that reads: Here rests in honored glory an American soldier known but to God.

Who is buried there?

Memorial Day marks the day in 1921 when four unknowns were exhumed from four World War I American cemeteries in France. Army Sgt. Edward F. Younger chose the Unknown Soldier of World War I, who now lies in the tomb. President Warren G. Harding officiated at the interment ceremonies at the Memorial Amphitheater on November 11, 1921.

There are three other soldiers buried at the tomb. In 1956, President Dwight D. Eisenhower signed a bill to select and pay tribute to the unknowns of World War II and Korea. The selection ceremonies and the interment of those unknowns took place in 1958.

The Unknown of Vietnam was only unknown for a short time. After being placed into the tomb in 1984, the Unknown was exhumed in 1988. Thanks to mitochondrial DNA testing, Department of Defense scientists were able to identify the remains as Air Force 1st Lt. Michael Joseph Blassie.

It was decided that the crypt that contained the remains of the Vietnam Unknown will remain vacant. The crypt cover was replaced with a new inscription that now reads: Honoring and Keeping Faith with America's Missing Servicemen, 1958-1975.

Who are the Tomb Guards?

The Tomb of the Unknown Soldier is guarded 24 hours a day, 365 days a year, and in any weather by Tomb Guard sentinels. Tomb Guards are volunteers -- part of the 3rd U.S. Infantry Regiment, also known as "The Old Guard." It is the oldest active-duty infantry unit in the Army, serving the US since 1784. The honor of Tomb Guard is incredibly rare. The badge is the least awarded in the Army. It takes a high level of dedication to be a Tomb Guard. They work in 24-hour shift and when they aren't walking the mat, they are living in the quarters beneath it. During that time, they complete training and prepare their uniforms, which can take up to eight hours.

What is the Changing of the Guard?

Changing of the Guard is an elaborate ritual that happens every hour on the hour October 1 to March 31 and every half hour from April 1 to September 30. Visitors are welcome to watch the ceremony, but must stand and remain silent.

The ceremony starts with the relief commander announcing the Changing of the Guard on the plaza. The Tomb Guard marches 21 steps behind the Tomb, turns, faces east for 21 seconds, turns and faces north for 21 seconds, then takes 21 steps down the mat and repeats the process. After the turn, the sentinel executes a sharp "shoulder-arms" movement to place the weapon on the shoulder closest to visitors watching the ceremony. This signifies that the sentinel stands between the Tomb and any potential threat. Doing things in increments of 21 symbolizes the 21-gun salute, which is the highest military honor that can be bestowed.